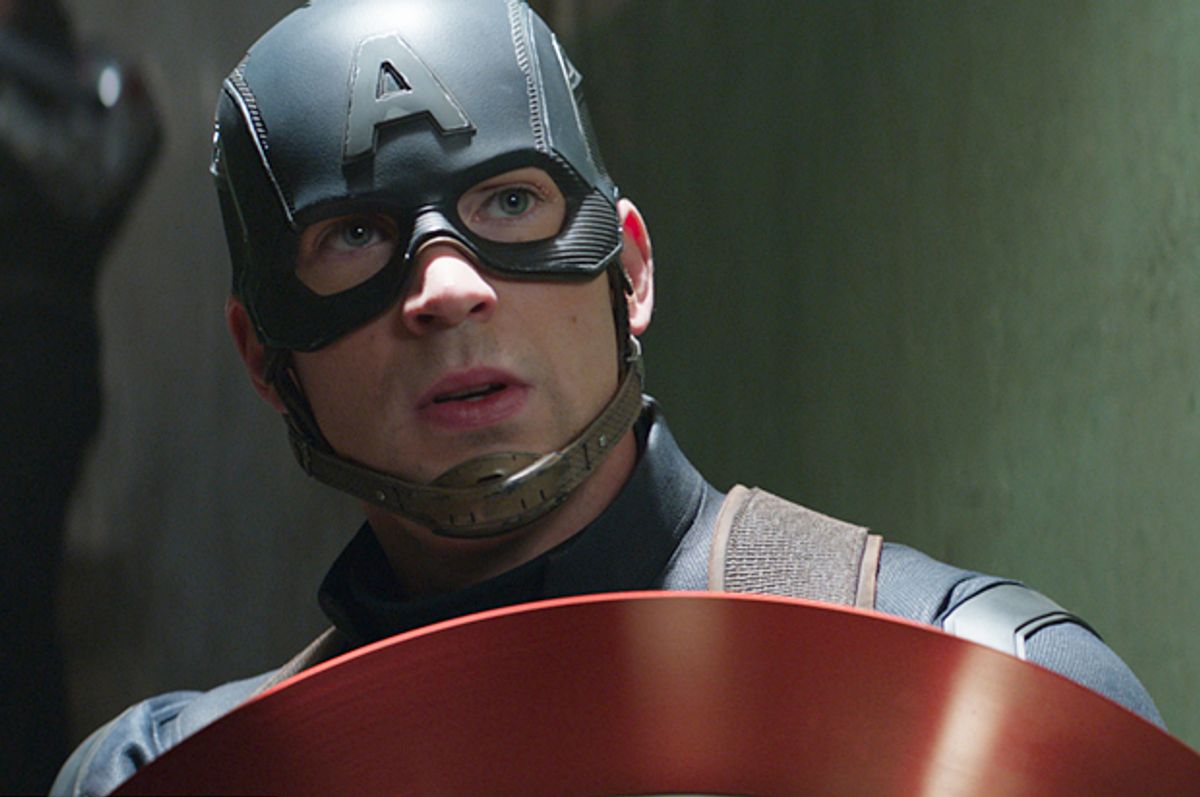 You can feel comic-book movies struggling to grow up, slowly and awkwardly. Problem is, they don’t really want to — and it’s not at all clear that growing up is good for business. Comic books and comic-book movies are a consummately American narrative form. Americanism, meaning a worldview or state of mind that permeates much of the human population, far beyond the borders of the United States, is built on the proposition that you never have to grow up. History is bunk; power is virtue; the sovereign individual reigns supreme; all forms of collective governance are for sissies. These are the premises of the comic-book universe, and of fascism. They are also the fantasies of children.

Is it unfair to suggest that the juvenile American fantasy universe that produces something like “Captain America: Civil War,” the latest preordained worldwide hit from the Marvel Comics pantheon, is closely related to the juvenile American fantasy universe that produces Donald Trump, Republican nominee for president? Maybe a little, but not that much. I’m not completely ignorant of actual comics, O enraged commenters of the near future: I was an actual American boy once, who purchased copies of “Doctor Strange” off a dusty beaver-board rack at McHaffie’s Drugs. I think they cost 45 cents. I’m aware that Marvel Comics have long had a left-libertarian streak, while the DC universe could more plausibly be accused of harboring proto-fascist archetypes.

Donald Trump superficially resembles a Marvel villain more than a Marvel hero, but that’s missing the point. Trump is nowhere near as witty or urbane as Tony Stark aka Iron Man, the billionaire superhero played by Robert Downey Jr. who is in many ways (despite the film’s title) the central character of “Captain America: Civil War.” (If you are remotely likely to complain about whatever spoilers I may let fall about this movie inadvertently, and because I totally don’t care, then this article isn’t for you and you can stop reading it now. We counted the click already.)

Stark wears stylish Tom Ford suits when not clad in an impregnable computerized tin can, whereas Trump is like the worst-dressed rich man ever. I’m sure his suits are expensive and all, but the Trumpian wardrobe displays no vestige of personality; he still looks like a guy who’s trying to sell you a $1,000 vacuum cleaner or a nonexistent condo in Cancun. Tony Stark is almost ostentatiously OK with having black friends, at a level that supposedly goes beyond “Here are my black friends” to “I don’t even think about that,” whereas Trump is — well, actually, Trump plays golf with Charles Barkley or whomever on exactly that same premise. How different are they really? The infantile fantasies driving the Trump electorate have been stripped of Tony Stark’s bogus veneer of Enlightenment and MIT education, but in both cases the fantasies are about disruptive levels of wealth and power, big enough to overturn governments and institutions and the girly-men who stand in the way of greatness.

It’s nothing more than a hilarious accident that “Captain America: Civil War,” with its story of the Avengers — a world-dominating gaggle of superheroes, in case you’ve been comatose for the last decade — torn apart by moral debates, political squabbles and endless intensely engineered fight scenes, holds faint echoes of the real-world civil war within the Republican Party. If Trump and Ted Cruz could have a big WWE-style throwdown in armor-plated Underoos that involved the destruction of an international airport and featured psychic sidekicks (Carly Fiorina’s Scary Songs of Witchcraft!), John Kasich shrunk down to gnat-size and a surprise appearance by Spider-Man, that would be a lot more fun than flooding the Indianapolis airwaves with attack ads. Oh, wait: John Kasich has been shrunk to gnat-size in reality, too!

Much of “Captain America: Civil War” is just the laborious working-out of leftover dangling plot elements from “Captain America: The Winter Soldier” two summers ago. I guess the enduring friendship between Chris Evans’ stalwart Captain America and his childhood companion Bucky (Sebastian Stan), who was engineered into a sinister super-soldier some decades back by the Soviets or Hydra or whoever the hell, is important to someone. Not that much to me. Both films were directed by the brothers Anthony and Joe Russo and written by the team of Christopher Markus and Stephen McFeely, and a certain coherence and even integrity flow from that.

There are legitimate reasons for the amped-up eagerness of the fanbase, and for the fact that this movie is already a huge hit all over the world. (One of the recent twists to the blockbuster formula is to stage the international release before the North American release, partly to cut down on piracy and partly to make the movies more review-proof than they are already.) I personally find the Russo brothers’ lightning-fast action scenes difficult to process — it’s as if cinema editing now exceeds the speed of human brain functions — but they’re undoubtedly exciting and skillfully constructed. You generally know who’s fighting whom, where they are in the imaginary geography and what the objective is, which are not questions that have ever troubled Michael Bay, for instance.

Furthermore, Markus and McFeely deserve credit for trying to push the moral calculus a bit further toward real-world questions. In recent years action cinema has featured enormous amounts of collateral damage — entire cities destroyed, thousands if not millions of deaths — which the protagonists barely seem to notice. Zack Snyder’s “Batman v Superman: Dawn of Justice” tried to tackle this after its own leaden fashion, but “Civil War” does it better. When Cap America and Black Widow (Scarlett Johansson) and Scarlet Witch (Elizabeth Olsen) and other random Avengers take down a squad of evil terrorists in Lagos, Nigeria, a bunch of African civilians get killed in the crossfire. Some of these are visitors from the peaceful nation of Wakanda, whose benevolent king (John Kani) calls for international action against the caped vigilantes.

This is all old news in the superhero universe, for sure. But Tony Stark and Black Widow and War Machine (Don Cheadle) and the spectral-robot A.I. thingy known as Vision (Paul Bettany) all agree to sign a document that grants command-and-control authority over the Avengers to a special United Nations committee. Nothing could go wrong with that plan, am I right? To no one’s surprise, Captain America — who was asleep for 60 years or whatever and is pretty much the corporeal embodiment of American superpower hegemony — is having none of it. He doesn’t come right out and say that he’s all about making America great again, and that only a bunch of losers would sign an agreement written by a bunch of Third World socialist weirdos with unpronounceable names. But that’s sure how it looks.

Anyway, when we fast forward to the end of the movie there’s a giant rock-‘em, sock-‘em fight between Iron Man and Captain America at a remote Cold War-era stronghold in Siberia, and a bunch of characters we supposedly like get sent to a super-secret U.S. government prison so awesome it might stop Dick Cheney’s heart (for, like, the 14th time). Along the way Downey chews up the scenery and has one moral crisis after another, and for a guy who was supposedly done making Iron Man movies he has pretty much made another one right here. By contrast, Evans just looks blocky and square-jawed and resolute — he is, more or less, the handsome guy that Donald Trump wanted to be when he was younger — although Cap does somewhat unexpectedly kiss someone and I have to admit that scene kind of won me over. (No, it isn’t Iron Man, though I’m not saying that tension is entirely absent.)

I warned you about spoilers many paragraphs ago, and I can’t imagine that anyone who cares doesn’t already know that there’s a pileup of new and old Marvel characters herein. This isn’t officially an Avengers movie, I guess, because Thor and the Hulk are MIA, but the king of Wakanda’s son, played with impressive screen presence by Chadwick Boseman, turns out to be Mm-Hm You Know Who with the silly kitty ears, and because all you people loved Paul Rudd so much in “Ant-Man,” now we’re stuck with him. As I already said, a certain New York City teenage web-slinging sensation is unveiled in his latest and youngest iteration, played by Tom Holland, who is 20 years old and quite charming and English of course. But does it speak well of Spidey, or the Marvel universe, or the actual human race as a whole, that when a rich guy shows up in his bedroom and tells him what to do, he just does it?