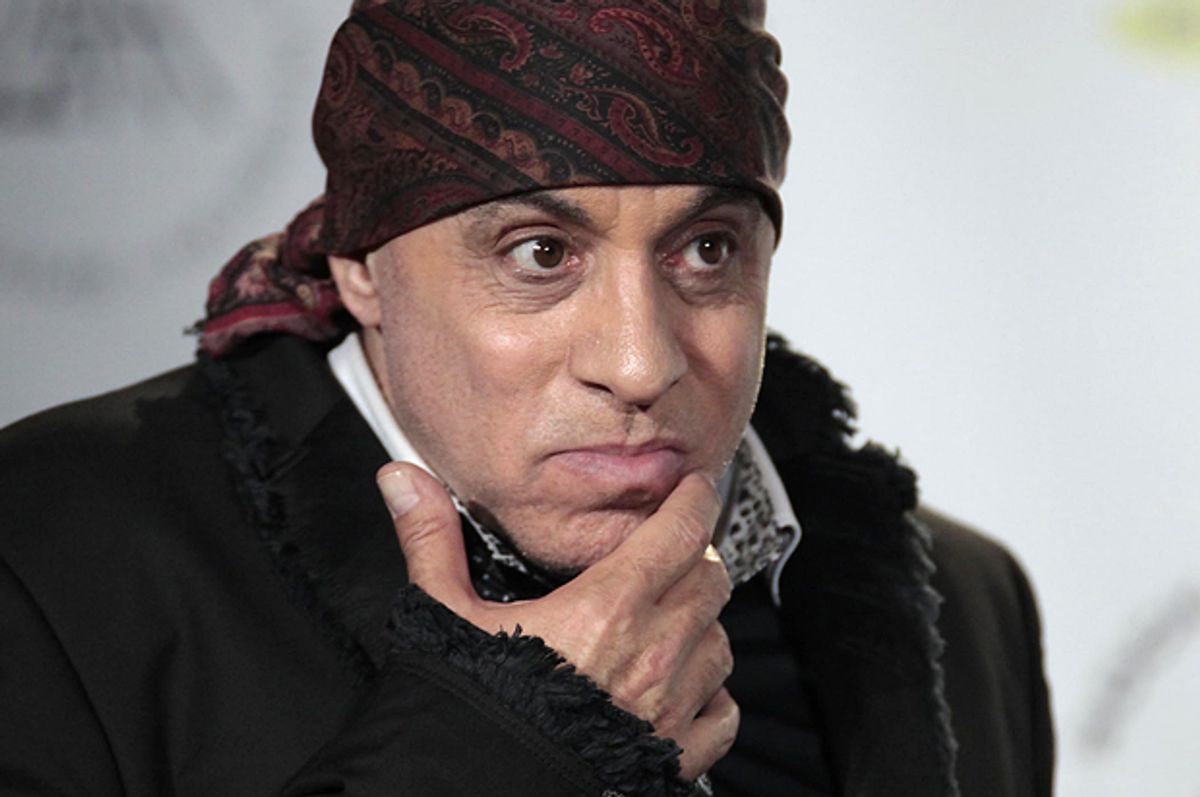 Musician Steven Van Zandt faced backlash and accusations of hypocrisy after a pro-Israel rant in which he got basic facts wrong about the Israel-Palestine conflict.

At the same moment, Van Zandt insisted "the problems there have existed for a thousand years." In reality, however, the problems in Israel-Palestine have not even existed for a hundred years. Israel was not created until 1948.

Van Zandt also firmly rejected comparisons between apartheid South Africa and Israel. Former leaders in the anti-apartheid movement in South Africa such as Desmond Tutu disagree, and have explicitly compared Israel's systemic discrimination against the Palestinians to what black South Africans endured.

The kerfuffle began when Van Zandt defended American exceptionalism in a series of tweets on Sunday.

Explaining his decision on Twitter, he wrote "Discrimination of any kind is unAmerican. And I Am A Patriot."

When a fan asked why he would refuse to perform in North Carolina but still play in countries that commit worse human rights violations, Van Zandt replied "We are Americans. America is supposed to be better," before later adding "the USA is the only country ever formed as a culture of ideas."

Another user then asked about Sun City, referring to the luxury South African resort that came to symbolize apartheid. In 1985, Van Zandt wrote an anti-apartheid protest song named after the resort, inspiring dozens of artists to pledge to refuse to perform there. The song "Sun City" was released by the group Artists United Against Apartheid, which Van Zandt formed.

"It was our government's policy keeping apartheid alive. This was unacceptable and we fixed it and took them down," Van Zandt tweeted on Monday, explaining his decision to boycott South Africa.

Other Twitter users subsequently pointed out that the U.S. government, which propped up South African apartheid until its final days, continues to support similarly discriminatory policies in Israel-Palestine.

Palestinians have lived under illegal military occupation for almost 50 years, and Palestinian citizens of Israel face more than 50 Israeli laws that directly or indirectly discriminate against them "in all areas of life," according to Israeli human rights organization Adalah.

Even the U.S. government, Israel's closest ally in the world, has acknowledged Israel's unlawful killings and use of excessive force and torture against Palestinians living in the occupied territories, as well as the “institutional and societal discrimination against Arab citizens of Israel.”

Shapiro linked to an article by Palestinian journalist Ali Abunimah which notes that "Obama’s military aid to Israel is breaking all records." The U.S. government already gives more than $3 billion in unconditional military aid to Israel each year, significantly more than it gives to any other country — and more than half of total U.S. foreign military financing — yet the Obama administration is hoping to increase this even further.

"Looks like it's time to do it again, for exactly the same reasons," a user responded to Van Zandt. "Please support BDS of Israel," she added, referring to Boycott, Divestment and Sanctions, an international grassroots movement that uses peaceful economic mechanisms to pressure the Israeli government to abide by international law and respect Palestinian human rights.

"You're OK with the BILLION$/year the US gov't gives Israel to keep their apartheid alive?" another user tweeted in response. "How do we fix that?"

Van Zandt aggressively shot back, calling "You and the other Israel boycotters are politically ignorant obnoxious idiots." He added: "Israel is one of our two friends in the Middle East. In addition to the fact that a boycott in that case would accomplish nothing. Go get educated."

After ordering supporters of Palestinian human rights to "go get educated," Van Zandt then falsely claimed that the conflict in Israel-Palestine "have existed for a thousand years."

This is a popular myth, but has no basis in reality. Israel was not formed until 1948. Before that, Jews, Muslims and Christians, and people of a variety of different ethnicities, lived in relative peace for centuries.

At the earliest, the conflict in historic Palestine can be traced back to the late 19th century. In the 1890s, Theodor Herzl founded the modern Zionist movement, which he openly described as a "colonial" project. Herzl, who was not religious, asked British colonial leaders for help in establishing a secular Jewish state. Originally, he considered modern-day Argentina or a British colony in eastern Africa.

In 1917, the British colonial regime's Balfour Declaration pledged the land of Palestine to the Jewish people, without consideration of the people who already lived there.

From 1947 to 1948, Zionist militias waged a war of independence from the British, forming the state of Israel. In this war, Zionist militias ethnically cleansed the Palestinians, forcibly expelling roughly two-thirds of the population, as renowned Israeli historian Ilan Pappé documented in his book "The Ethnic Cleansing of Palestine."

Feld was formerly active in the pro-Israel movement, but has since become an outspoken supporter of Palestinian human rights and the BDS movement.

Feld argued there are large parallels between apartheid South Africa and Israel.

"I understand how it might appear that way but your analysis is incorrect," Van Zandt insisted. "It's a lot more complicated than SA."

Israeli activist Ronnie Barkan, who also supports the Boycott from Within movement, shot back "the Zionist-Palestinian conflict couldn't be any less complicated. Tel Aviv is a modern day Sun City."

Sid Shniad, a member of the national steering committee of Independent Jewish Voices – Canada, replied "Actually, it's pretty simple. One people has expelled another from most of their land, occupies the rest, & is intransigent."

Meanwhile, many South African activists, including former leaders in the anti-apartheid movement, have compared the former apartheid regime with Israel, and have expressed support for the peaceful Boycott, Divestment and Sanctions movement against Israel.

Renowned South African leader Desmond Tutu has said "I have witnessed the systemic humiliation of Palestinian men, women and children by members of the Israeli security forces."

"Their humiliation is familiar to all black South Africans who were corralled and harassed and insulted and assaulted by the security forces of the apartheid government," he added.

Tutu has endorsed the BDS movement, explaining, "In South Africa, we could not have achieved our democracy without the help of people around the world, who through the use of non-violent means, such as boycotts and divestment, encouraged their governments and other corporate actors to reverse decades-long support for the apartheid regime."

"The same issues of inequality and injustice today motivate the divestment movement trying to end Israel's decades long occupation of Palestinian territory and the unfair and prejudicial treatment of the Palestinian people by the Israeli government ruling over them," he said.

The apartheid regime in South Africa was a close ally of not just the U.S., but also of Israel.

Veteran Jewish South African anti-apartheid activist Denis Goldberg, who spent two decades in a South African prison for his activism and briefly lived in Israel before moving in protest, has also called Israel an apartheid state.

"There is no doubt in my mind that Israel is an apartheid state," Goldberg said in 2015. "Having lived through apartheid in South Africa, I cannot allow in my name the same kind of oppression to go on."

Even Nelson Mandela himself insisted "we identify with the PLO," referring to the Palestine Liberation Organization. "Just like ourselves, they are fighting for the right of self-determination."