After Trump, the deluge: Does the GOP catastrophe hold the seeds of renewal?

After the Trumpian ascendancy and the hilarious downfall of Ted Cruz, do the Republicans have a future? Maybe 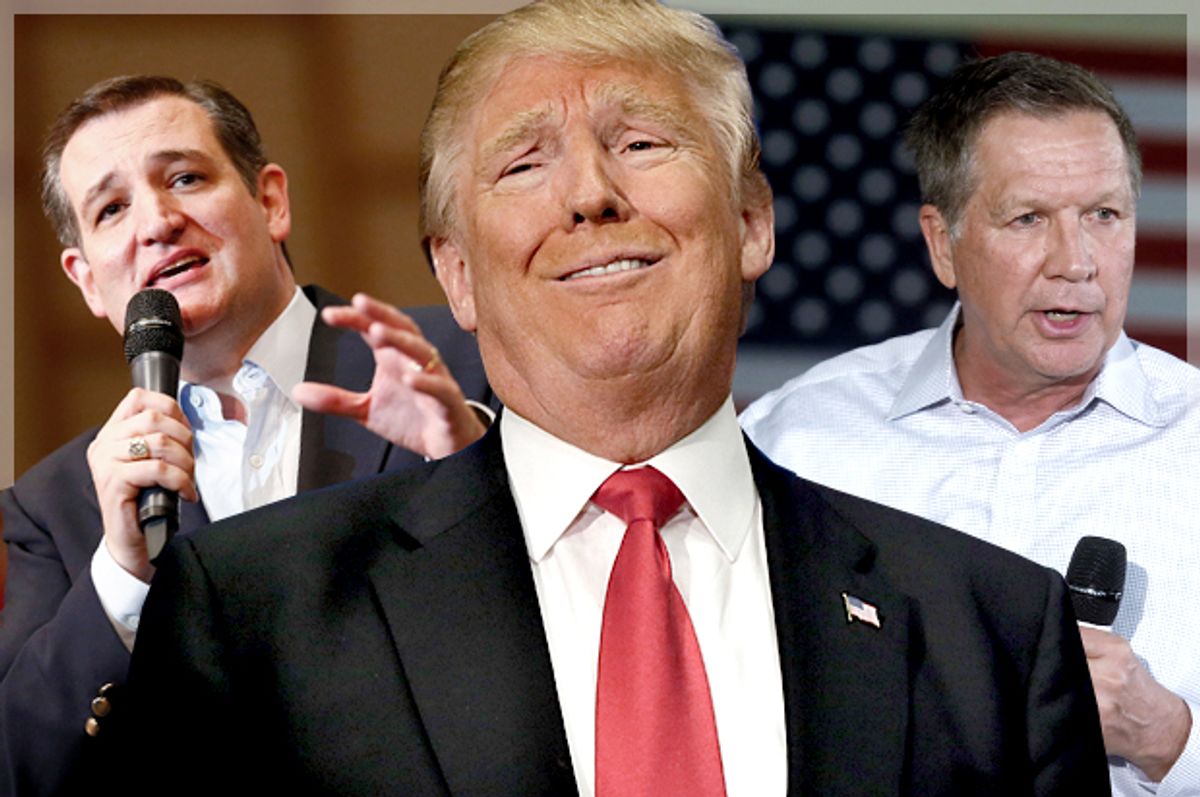 I was looking forward to more of Carly Fiorina’s nightmarish singing. I don’t think that adjective is metaphorical. That moment last week when Fiorina busted out the lullabies for Ted Cruz’s robot children, revealing her true identity as the White Witch from the “Chronicles of Narnia,” was a lot like one of those moments in a “Nightmare on Elm Street” movie where a character thinks she’s awake and in the real world only to realize, skreek-skreek-skreek, that the real world no longer exists and maybe never did.

Now the upper echelons of the Republican Party are having their own nightmare moment, following the ignominious defeat of the worst standard-bearer for their damaged brand they could possibly have conjured up. Seriously: Their final weapon against a hostile takeover by a would-be tyrant who represents virtually none of their party’s supposed core beliefs, and who is positioned for a disastrous defeat in an election they quite likely could have won was a man whose actual wife felt compelled to deny that he was the Zodiac Killer. It was as if the Los Angeles tourist board sat around a table trying to come up with the perfect symbol for their city’s wild and colorful cultural history, and unanimously agreed on Charlie Manson.

I don’t actually think that what has happened to the Republican Party is good for America or for politics, and I have repeatedly argued that the Democratic Party faces a version of the same crisis, more politely and in slow motion. Yeah, now Hillary Clinton wants to claim that losing Indiana doesn’t matter and she barely even tried; that wasn’t what we heard last week. But when it comes to the downfall of Ted Cruz, it couldn’t have happened to a nicer guy. During my one up-close encounter with Cruz in New Hampshire, I witnessed him lecturing a roomful of bored voters about why their region of the country was called “New England,” as if they hadn’t heard about that in elementary school. He may be intelligent and a principled conservative and all that, but he’s also a monumental douchebag. He’s Il Duce of Doucheburg, Lord of the Tiny Tower of Barad-Dûche.

Anyway, Republicans: The nightmare is now your reality. One, two, Donald’s comin’ for you! Three, four, better lock the … Too late! Anyway, locking the door didn’t help, because Donald Trump came boiling through the keyhole of the Republican castle like poison gas. Everybody inside now has a choice between breathing deeply and hoping it’s all over soon, or jumping out the window. Death is not the end, or so an old ballad informs us, and neither the political demise of the GOP’s leadership caste nor the electoral death that lies ahead in November will be the end of the Republican Party. But what in God’s name will its afterlife look like?

Donald Trump really does have some things in common with Freddy Krueger, including his unusual complexion and the fact that he represents the murderous, odious but in many ways understandable lust for revenge on the part of those who’ve been relentlessly crapped on from above. Everybody following this election has made the same observation, but it bears repeating: For 40 years or more, the dark political wizards of the Republican Party have bred and nurtured the Trump demographic, and now they’re shocked that it’s grown up into a carnivorous flower that has snaked its way to the rear to bite them in the capacious collective ass.

Pat Buchanan and Lee Atwater and Karl Rove and the Koch brothers have poured billions of dollars and volumes' worth of Voldemort-level evil lore into convincing disgruntled and downwardly mobile white Americans to vote against their own economic interests over and over again. They fed them a catechism of resentment directed at a long list of nefarious foes — culminating in Barack Hussein Obama, the Kenyan-commie-gay usurper — and promised them a return to an imaginary America that never existed in the first place and definitely couldn’t exist now (and that in any case the Republican leadership absolutely did not want).

But those guys had a blind spot: They never imagined that someone could come along and steal the whole circus from under their noses, promising those voters the same infantile fantasy, freed of the irritating ideological baggage. Trump is the political equivalent of an all-night strip club where the lap dances are free and the bouncer never ends up breaking your teeth on the curb at 6 a.m. All the jingoism and crude misogyny and empty tough talk you could want, with fewer pointless overseas wars and no mystifying asides about free trade or Medicare Part B or bigger tax cuts for the people who already have all the money. (Or “flexible savings accounts.” Of all the Republican scams of recent years, one of the subtlest and most demonic.)

People like me in the educated coastal classes typically view Trump’s voters as stupid, ignorant and dangerous, but that’s no better than two-thirds correct. They may want impossible things, and they may be dug into hardened bunkers of magical thinking. But they eventually noticed that the Republican leadership and its anointed candidates viewed them with contempt and played them for suckers. Maybe they’re not so dumb after all.

Anyone who gets conned is in on the con at an unconscious level, or so psychologists and David Mamet characters say. Trump’s electorate is in on the con at pretty nearly a conscious level, I would say. Many of his supporters understand he probably can’t win the election, and couldn’t build his stupid wall even if he did. Trump and his wall are signifiers of incoherent rage, focal points for unfocused resentment. His voters are less interested in governing the country than in ventilating their rage and “fucking shit up,” to use the vernacular. They have succeeded beyond anyone’s wildest dreams.

What does the Republican Party’s leadership class do now? Better to ask what it can possibly do. Many elected officials and party apparatchiks will uneasily gather behind Trump at Quicken Loans Arena in Cleveland, perhaps the most appropriately named venue in political history. Others will stay home and sulk; a few will actually jump ship and support Hillary Clinton. (Who is, and I’ll say this just once, closer to being a conventional Republican than Trump is.) All of them will try to forget the whole thing as rapidly as possible after November. It's like a Britney Spears wedding: What happens in 2016 stays in 2016.

Given the universally flawed prognostications of virtually everyone, we should make no assumptions about what happens in a fall campaign between Trump and Clinton that will surely be among the most dreadful in American history. But let’s roll, for now, with the conventional wisdom that Clinton is disliked but Trump is despised — he appears to be the most unpopular major-party candidate in recent political history — and that it will be nearly impossible for him to assemble an Electoral College majority.

For the Republican Party, the Trump coup-d’état followed by a November wipeout would be catastrophic. First the party’s leadership and its funders have been comprehensively rejected by the electoral base, and then the riled-up base is (presumably) rejected by the general public. But that catastrophe contains the seeds of possible renewal, or at least it would if there were any Republicans with the wit and imagination to seize them.

In its 21st-century incarnation, the GOP has become the party of rejectionism and nihilism and total whiteness. If there was a turning point — and, really, there were dozens — it came with the shocking primary defeat of House Majority Leader Eric Cantor in 2014, a rising conservative star in a safe Republican seat dethroned by a hard-right upstart. The center-right party of suburban businessmen and ladies who lunched and small-town Protestant ministers, which once had room for Dwight Eisenhower and Fiorello La Guardia (not to mention Edward Brooke, the first elected African-American senator, and Margaret Chase Smith, the first woman to serve in both houses of Congress) has tethered itself to the most resentful and most alienated elements of the exurban white underclass.

That demographic is declining, in relative terms. But it still comprises many, many people, and it’s both heartless and inaccurate to suggest those people are dying out or disappearing. Despite our stereotypes about race and poverty, Census Bureau numbers suggest that of the 47 million or so Americans who live below the poverty line, roughly 20 million are white. Millions more working-class whites outside the big cities live above the poverty line under precarious paycheck-to-paycheck circumstances, amid a pervasive atmosphere of downward mobility and lost opportunity. If those people feel abused or ignored, and believe they lack effective advocates, it’s because they have been and they do.

Whether those people can ever be persuaded to fight for their actual economic interests, in the poisoned climate of American politics, is a question with no evident answer. But in 2016 the toxic marriage between the Republican Party and working-class white America has finally hit the rocks, and for that we have to thank a bulbous pink-and-orange entity whose hair was apparently sculpted by the high-velocity winds of his distant homeworld. Behind the scenes, the GOP’s Washington leadership can read: They know that John Kasich might well beat Hillary Clinton in a general election, but has no chance of winning the nomination in a primary season dominated by angry downscale white folks. Hell, Jeb Bush might beat Clinton, despite having captured the Ed Muskie Memorial Trophy as most hapless primary candidate of all time (previously held by Rick Perry and the late Fred Thompson).

So I guess the Republican brain trust can decide to follow Donald Trump and his true believers down the sewer drain of permanent white resentment. I mean, that’s the way they’ve been going anyway. They’ve still got plenty of money and nice offices, and they’ve baited the Democrats into a pattern of ideological retreat that has won the GOP a hefty share of power in Congress and clear across the middle of the country. That’s all in doubt now, but it’s not like it’s going to vanish overnight.

Or the Republicans could untether themselves from racism and xenophobia and a reflexive hatred of government, and build for the future as a moderate pro-business party with vaguely libertarian social policies and an internationalist foreign policy that tries to balance flag-waving machismo with pragmatism. Kasich and Bush would be leading candidates in that party, while Trump and Cruz wouldn’t even be in the picture. That party could win elections, but there’s no visible path for today’s doomed Republicans that leads from here to there. For one thing, that party already exists, or very nearly does. It’s about to nominate Hillary Clinton.