Does Klingon belong to everyone? "It’s a language — the whole point is to use it!" 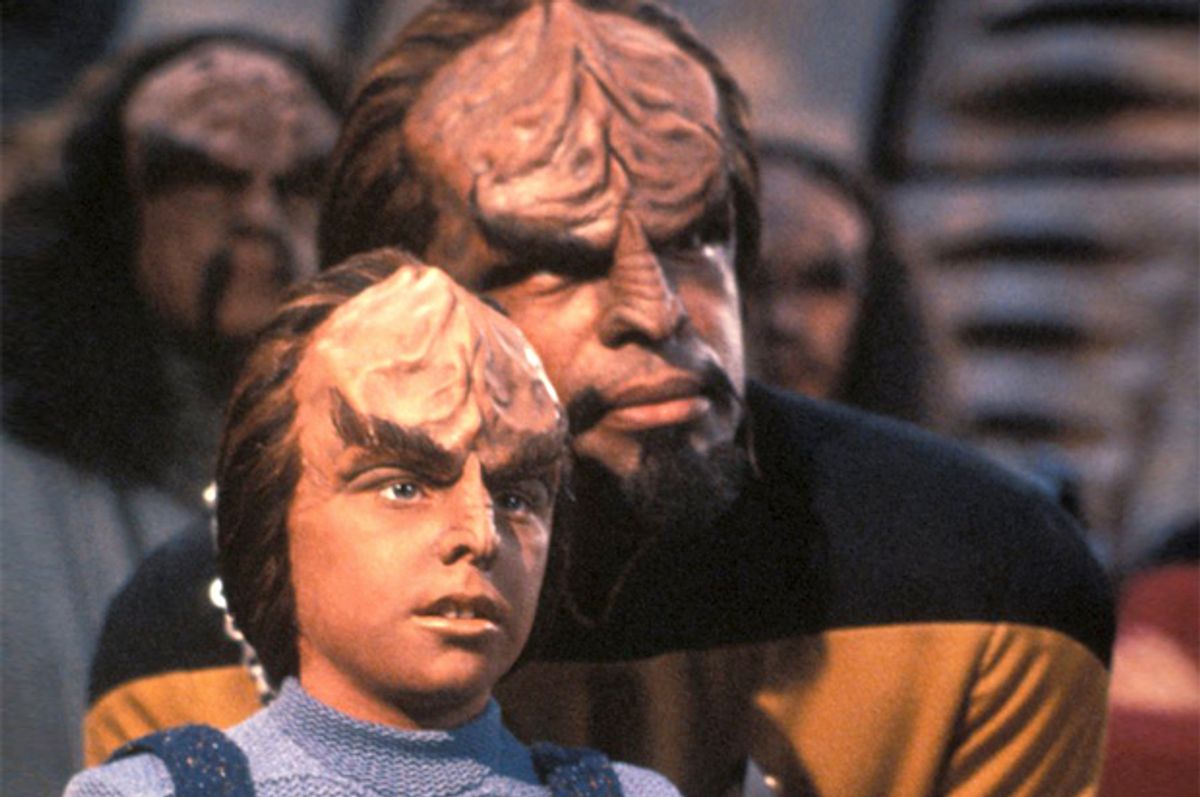 Michael Dorn and Brian Bonsall in "Star Trek: The Next Generation" (CBS)
--

Who owns a made-up language? It sounds like a joke, but the question has become dead serious in a California district court. That’s because Paramount Pictures is suing the Star Trek fan film “Axanar” for using the Klingon language, invented for “Star Trek III: The Search For Spock” by the linguist Marc Okrand.

To Paramount, Klingon belongs to the studio. To Star Trek cultists who’ve been using the language since its 1984 creation, or to groups like the Language Creation Society, it belongs to anyone who speaks or writes or hears or reads it. “Now, with 250,000 copies of a Klingon dictionary said to have been sold,” The Hollywood Reporter notes, “Klingon language certification programs being offered, the Microsoft search engine Bing presenting English-to-Klingon translations, one Swedish couple performing their marriage vows in Klingon, foreign governments providing official statements in Klingon and so on, the Language Creation Society is holding up Klingon as having freed the ‘bounds of its textual chains.’ “

Salon called David J. Peterson, a language creator who has created languages for “Game of Thrones,” “Penny Dreadful,” and “Thor: The Dark World.” He’s also the author of “The Art of Language Invention,” which has an online adjunct on YouTube.

We spoke to Peterson from his home in Orange County, California: The interview has been lightly edited for clarity.

One of the issues that sits behind all of this is how rigorous and demanding it must be to develop a language. It must be an enormous amount of work.

That goes without saying. A language is basically three things — a sound system or a phenology, a series of atoms. You need the grammar — how the things built up into words relate to each other. And you need the tokens and spells lexicon.

To give you a sense of how long this takes: The sound system can be done in a day and maybe revised later. The grammar takes anywhere from three months to a year, depending on how quick you work and how much time you have. And the lexicon can take the rest of your entire life. The languages we speak have hundreds or thousands of words. The language I’ve created, Dothraki, that has the most words of all of them — about 4,000 words over seven years.

I imagine there’s a range of how intricate and filled-out a language is. How does Klingon fit in, from simplest to most complex?

It actually is not a high bar to pass to get a language that can translate whatever you need, especially if the translator has a bit of ingenuity on their side. What’s difficult is finding something that works differently from something else, and that works in an interesting way. It’s more difficult to create a naturalistic language — [an organic one] that looks like it exists on Earth — versus creating something like Esperanto, which is very regular and tries to mirror the way Indo-European languages work.

Klingon is somewhere in the middle, between something like Dothraki and something like Esperanto. It’s regular but its grammar is totally different from what most English speakers are familiar with. Consistent and regular, but totally out there.

As far as completeness goes, I’ve met fans who are totally fluent – they’ve translated texts ranging from Shakespeare’s “Hamlet” to Gilgamesh, and last I heard they were working on their translation of The Old Testament.

I figure if you are translating “Hamlet,” you’re pretty good.

So given all this, with grammar, thousands of words, and a lot of work to design, should a language be copyrighted or should it quote-unquote belong to everyone?

If you think about the various types of artists we have, and think about a famous chef, producing a meal. He can’t copyright ingredients or their combination. He can write them down, and copyright the book, and sell the book. He can’t prevent other people from making that meal.

And he can’t get angry if his recipe shows up in another book unless it’s copied word for word. So that’s where we fall when we talk about a created language.

It sounds like you come down the way the fans do – that the language was invented, but it’s changed, grown, become a living language so they can use it freely.

I agree with that, but also with the larger issue: The minute it’s created, anyone can use it. Just like if a movie comes out and tries to introduce new slang word, anyone can use it… It’s a language — the whole point it to use it!

What made you want to create languages?

It’s just something I started to do as a sophomore in college. I had a larger goal to learn as many languages as I could – I was already an English major, and by then I’d taken two semesters of Arabic, a semester of Russian, a semester of Esperanto, and a semester of French… And then my mother urged me to take a linguistics course. One class, and by the end of it I was hooked. It was amazing that that counted as work. I loved it and found it really easy. And it was in that course that I came up with the idea of creating my own language. I started creating it right there in my notebook in class, and basically kept it up for the next 16 years.

Wow — so how fully developed and sophisticated are the languages Tolkien came up with? I think the main one was Elvish.

He had many different languages the elves speak, depending on which elves they are. Tolkien did some things that were incredibly innovative. First of all, he’s the first person we have a record of who created languages for fun. There were probably other people but we lost the records to the ages.

Tolkien created them because he loved languages. He was a philologist and wanted to create his own family of languages, his own world. He did what he learned in philology – you start out with an old language, a proto-language, and he evolved it into other languages. That was very far-sighted of him.

He worked on several for quite a bit and those are quite interesting. Unfortunately, his language creation was a victim of his fame: Once he started writing these books, the books became very popular and demanded more of his time, and his fame demanded more of his time. So he stopped working on languages – and what exists now are fragments. Some are built up quite a bit. For other cases all they have is a notebook page.