It's a con: Christian men are not "testing" Target's trans-inclusive policy by going into the women's room 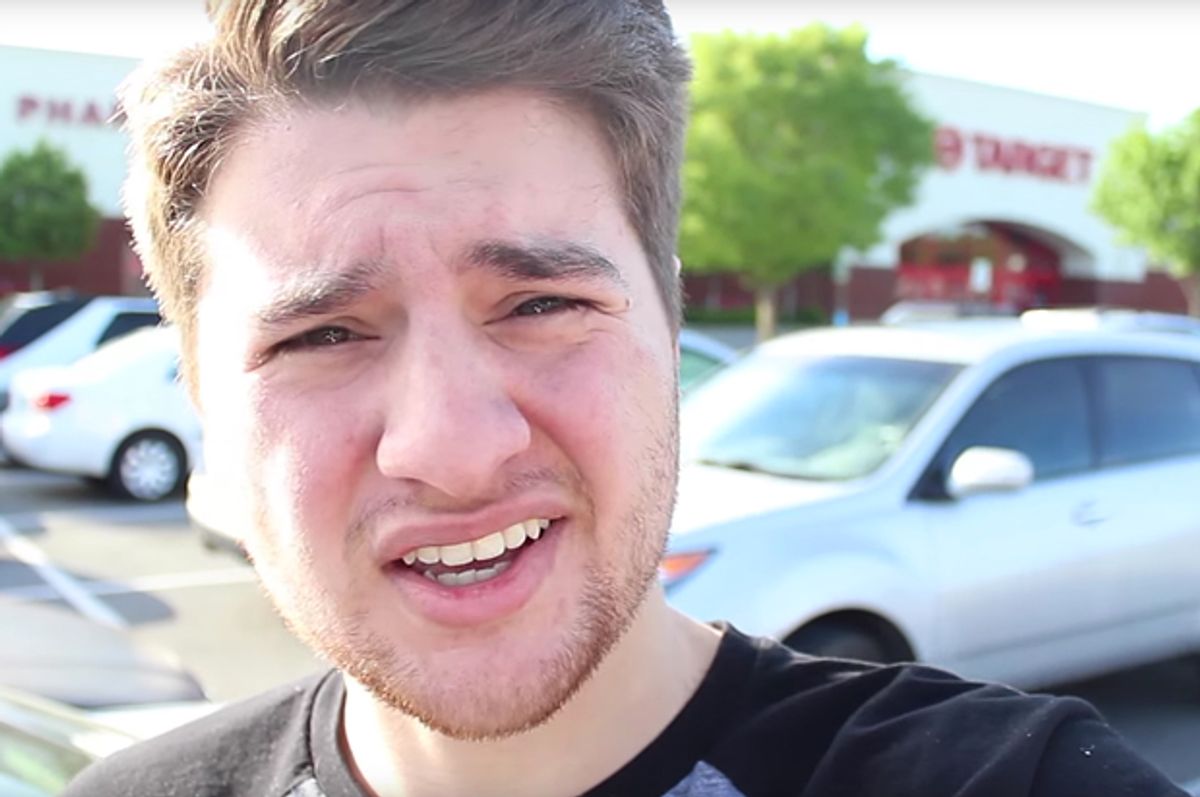 It was a story destined to go viral immediately: The far right and definitely creepy American Family Association (AFA), in order to prove that Target's trans-inclusive bathrooms are a danger to women, is testing the corporate behemoth by sending men into women's restrooms and instructing them to claim they are trans if someone confronts them.

"Group claims to be sending men into women's restrooms at Target," reads a typical headline at the Chicago Tribune.

You couldn't come up with better click bait than a story about a group sending creepy conservatives into bathrooms to somehow "protect" women from creepy men in their bathrooms.

But as hilarious as this all is, there's just no reason to worry about finding men, Christian or otherwise, hanging out in the women's room at Target.

The story is sourced back to a single quote from Sandy Rios, the director of governmental affairs for AFA, who told Breitbart News Daily, "We’ve already had people testing this, going into Targets and men trying to go into bathrooms."

Right off the bat, there's good reason to be skeptical. Rios, like many of her right-wing colleagues, is well-known for having a strong disdain for things like facts and the truth. She has called Beyoncé's videos a sign of the apocalypse and believes that Obama is on the verge of declaring martial law. When someone is so prone to mistaking her vivid fantasies for reality, it's wise to be extra wary of her claims.

Also, the phrasing of her sentence — "We've already had people" — is really vague. It could mean they're sending people in. Or it could just mean that she heard that this was happening.

So is it true? Are men, either for self-directed pervy reasons or for Christian warrior reasons , going into women's bathrooms at Target and claiming to be trans to get away with it? I decided to investigate.

I called the AFA to ask about this. A PR representative got back to me, but when I asked if they were sending men into women's restrooms to "test" if they could get away with going into women's rooms by claiming to be trans, the representative seemed confused. I asked if I could speak to one of these men that are supposedly doing these investigations and she said she would look into it and get back to me. So far, she hasn't done so, even though I called back and left a voicemail with some further questions.

Hunting around online for evidence of conservative men going into women's rooms and claiming to be trans turned up nothing. The AFA website has no testimony from men who supposedly did this. On YouTube, there are videos of conservative men going into Target to grill the managers or ranting in Target parking lots, but there is no video I could find of a man going into the women's restroom, being confronted about it, and using the "I'm trans" excuse to continue to use the bathroom.

(Updated to add: After I wrote this, the AFA issued a statement denying that they are sending men into women's rooms. They continue, however, to be hate-mongerers and bigots who are stirring up hysteria and telling lies about trans-inclusive policies in order to scare people.)

One would think, if this was a thing that was happening, conservative activists wouldn't be shy about producing the evidence. And yet, there's nothing.

There is a story about a man named Michael L. Merichko, who was arrested for causing a disturbance at a Target to "protest" the bathroom policy. Initial reports suggested Merichko was an "active shooter", but police clarified that he did not fire a gun, even though he was arrested for scaring people. The details are vague, but one thing is absolutely certain: He was not pretending to be trans to get into the women's room.

But perhaps Rios wasn't actually talking about conservative men trying to prove a point. Perhaps she meant "we have" in the colloquial sense, to mean "we have heard stories about", i.e. she's reiterating a claim that there are pervy men who lurk in women's rooms and, when caught, claim to be justified because they are trans.

The problem is there isn't any evidence that she does have such stories. At the AFA website, they've amassed an impressive-seeming list of sex crimes happening at Target, but if you actually bother to read the list, what immediately becomes clear is not one of these incidents fits the men-claiming-to-be-trans-in-the-bathroom mold.

Not one single story involves a man pretending to be trans or dressing in women's clothes. Most of the stories don't even involve bathrooms. Most of the assaults were men dressed in men's clothes attacking women and girls right there in the regular store aisles. That might be an argument for banning men from the store altogether, but not for banning trans women from the bathroom.

Of the three incidents that did happen in the bathroom, not one involved a man pretending to be a woman. In one incident, it was a man taping men in the men's room. In another, it was a man hiding a camera in the family room. (Notably, men are allowed in both rooms anyway.) The only story they could find of a man getting into a women's room was a case where a man snuck into the women's room, which is a far easier way to go about such a thing than by drawing attention to yourself by putting on a dress and trying to front like you're trans.

Oh yeah, and in every single instance that AFA recorded, the pervert in question was arrested. Because, despite what conservatives would have you believe, claiming to be trans is not actually license to sexually assault people or videotape them in the bathroom. On the contrary, the fact that a man was arrested for filming other men in the bathroom shows gender identity has nothing to do with it.

There's a larger lesson in this, as well: Be very, very wary of right wingers telling tales. While people of all political stripes can get sucked into urban legends that feed their prejudices, conservatives — especially religious conservatives — tend to traffic in tall tales more than most. Like previous stories about Proctor & Gamble being Satanists or that the Harry Potter series is encouraging occult activity, stories about men claiming to be trans in order to access women's rooms should be regarded as an urban legend, shared not because there's a shred of truth to it but because right wing Christians wish it were true.

Or, in the parlance of the internet: Pics or it didn't happen.