Her days working for Roger Ailes may be numbered, but her rancid views on feminism and food stamps will live on 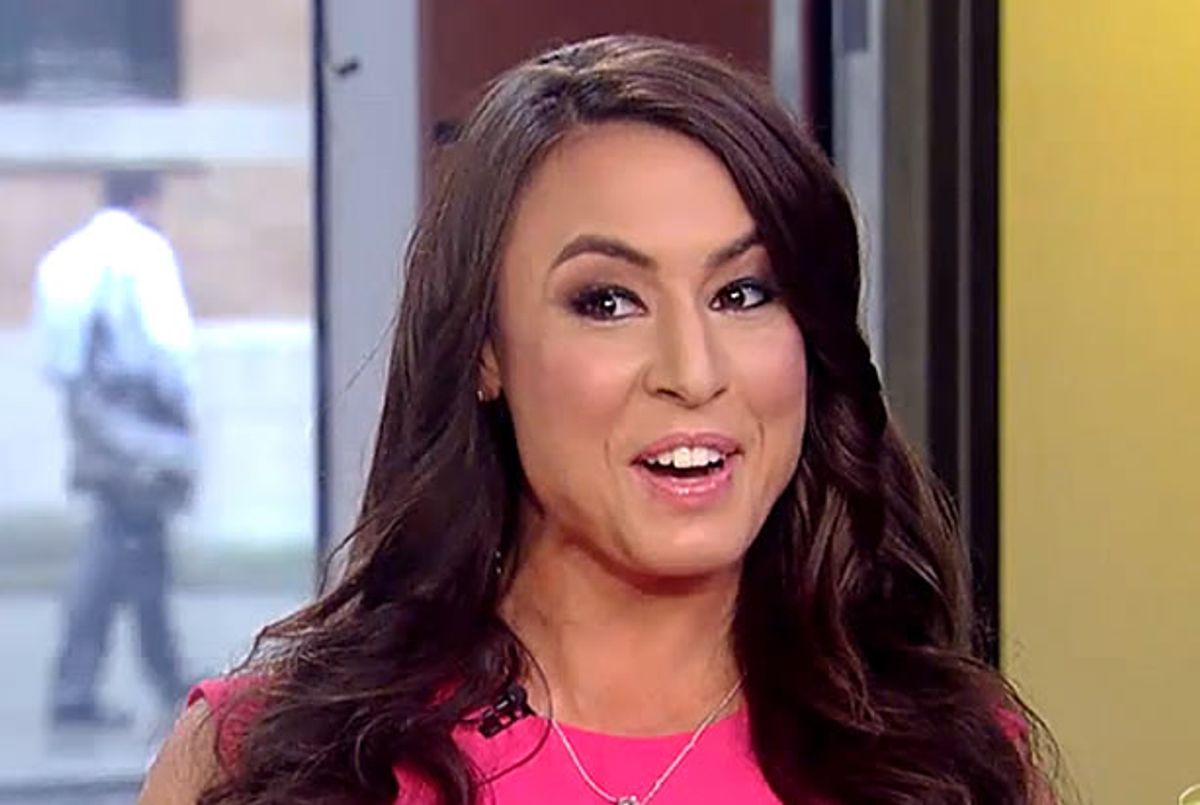 Frequent viewers of Fox News, and those who mock it for a living, have noticed a familiar face has gone missing this past week. Rumors abound as to what pushed "Outnumbered" co-host Andrea Tantaros off-air a day after the launch of her new anti-feminism book, Tied Up in Knots: How Getting What We Wanted Made Women Miserable. Numerous reports suggest some sort of “contract dispute” is at fault. Others say Tantaros may be permanently off the "Outnumbered" couch due in part to her outspoken support of Republican frontrunner Donald Trump, although it hasn't hurt Bill O'Reilly.

Whatever the reason, Fox News is certainly missing an element of entertainment in the form of daily doses of Tanta-rants, so to pacify your need for an IQ drop, we’ve compiled a list of some of the dumbest things Andrea Tantaros has ever said (which was only difficult because there was a ton of material to choose from). Enjoy the stupidity!

1. Tantaros says she would look "fabulous" on the food stamp diet.

During a discussion about food stamps on Fox Business, Tantaros suggested she would look amazing if she tried the food stamp challenge: eating on $133 a month.

“I should try it, because do you know how fabulous I’d look?” Tantaros said. “I’d be so skinny. I mean, the camera adds 10 pounds, it really does. I’d be looking great.”

2. Tantaros blames feminists for the decline of marriage.

During a segment on "Outnumbered," the co-hosts discussed the decline of marriage, eventually coming to the conclusion that feminists are responsible for the rise of cohabiting non-married couples. Tantaros' thesis was basically that feminists give it up for free all the time, ergo men have no need to get married anymore.

“I mean this is a term that been dubbed by Breitbart as the sexodus,” Tantaros said, later adding, “Women have been encouraged to give it up freely with the rise of feminism, have sex like a man.”

“So, they’re doing this and they’re not making the guy step up to put a ring on it,” she concluded.

3. Tantaros says she was "embarrassed" to hear Jennifer Lawrence speak about politics.

As someone who is paid hundreds of thousands of dollars a year to discuss her inane opinions on national television, it’s a little rich for Tantaros to declare she’s “embarrassed to be a woman” after learning of Jennifer Lawrence’s political leanings. The "Outnumbered" ladies eviscerated Lawrence for offering up her opinion on Kim Davis and Christianity, going so far as to suggest Lawrence doesn’t have the right to discuss such complex topics.

“Wow, I’m embarrassed for Jennifer Lawrence; I’m embarrassed to be a woman, Harris, to listen to a female spout such idiocy,” Tantaros said, as several of her co-hosts agreed.

4. Tantaros suggests we should get rid of the Department of Education.

Ah yes, one of Tantaros’ favorite topics: the bloated American bureaucracy stealing our tax dollars and using the money to teach our kids about “meaningless liberal crap.”

"You know how I feel about the Department of Education and government bureaucracy and Washington, D.C. dictating what kids should be taught,” Tantaros said. "I think it's ridiculous.”

"And it seems to me that the universities have always taught this sort of 'Let's apologize for all of the wrongdoing and the boor-headedness—boorish behavior of the United States of America,'" she later added. "It seems that's trickling down to our kids' level. And that is a problem.”

"We are so behind so many countries in math and science,” Tantaros continued. “They are not even getting the basic education because they are getting this meaningless liberal crap every day!”

Okay, this is a weird one. While discussing a case where a woman married a student to avoid having him testify against her on statutory rape charges, Tantaros suggested feminism is “turning women into sexualized freaks” who feel like they can go after underage boys. Wait, what?
"Everything has become so sexualized now,” Tantaros said. “Women who [commit statutory rape] feel like it's not as stigmatizing as it was before. There's something about feminism that lets them know 'I can do everything that a man does. I can even go after that young boy. I deserve it.'”

6. Tantaros jokes the Clinton household should be sent a sexual harassment manual.

This Tantaros quip even earned an audible reaction from the "Outnumbered" couch. While discussing efforts to stymie sexual assault among refugees relocating to the west, Tantaros suggested the Clinton household could use a copy of the sexual assault manual Germany is handing out to migrants.

“The one with the guy reaching for her bottom, we could get a copy [of the manual] for the Clinton household,” Tantaros said. “Maybe they could use it there.”

After her co-hosts groaned, Tantaros was quick to insist she doesn’t “take light of this story.”

Whatever the hell that collection of words means.

“I’m never gonna miss an opportunity to take a shot at the Clintons, though,” she added.

7. Tantaros: America is awesome even though we torture.

Never one to apologize, Tantaros dismissed a report by the Senate Intelligence Committee on CIA torture tactics by insisting we've already “closed the book” on that seedy part of U.S. history. She then went on to insist the reason the government released the report was because the Obama administration wants “to show us how we’re not awesome.”

“The United States of America is awesome,” she continued. “We are awesome. But we’ve had this discussion. We’ve closed the book on it. The reason they want the discussion is not to show how awesome we are. It’s to show us how we’re not awesome. They apologized for this country.”

“They don’t like this country,” Tantaros added. “They want us to look bad and all this does is have our enemies laughing at us.”

Before she was on Fox News, Tantaros was an Alpha Phi sorority girl, which may explain why she was so sympathetic when it was revealed by Jezebel that fellow Alpha Phi and 2015 Miss America winner Kira Kazantsev was kicked out of her sorority for hazing.

On "The Five," Tantaros told her co-hosts Jezebel was “this angry website that tried to out [Kazantsev].”

“It’s a bunch of angry chicks that just hate on really attractive women,” Tantaros continued. “They should find something else better to do—to me this is a total nothing burger.”

Watch the video over at Mediaite.