The revolution is bigger than “Hamilton”: This year's Tony nods offer much-needed contrast to #OscarsSoWhite 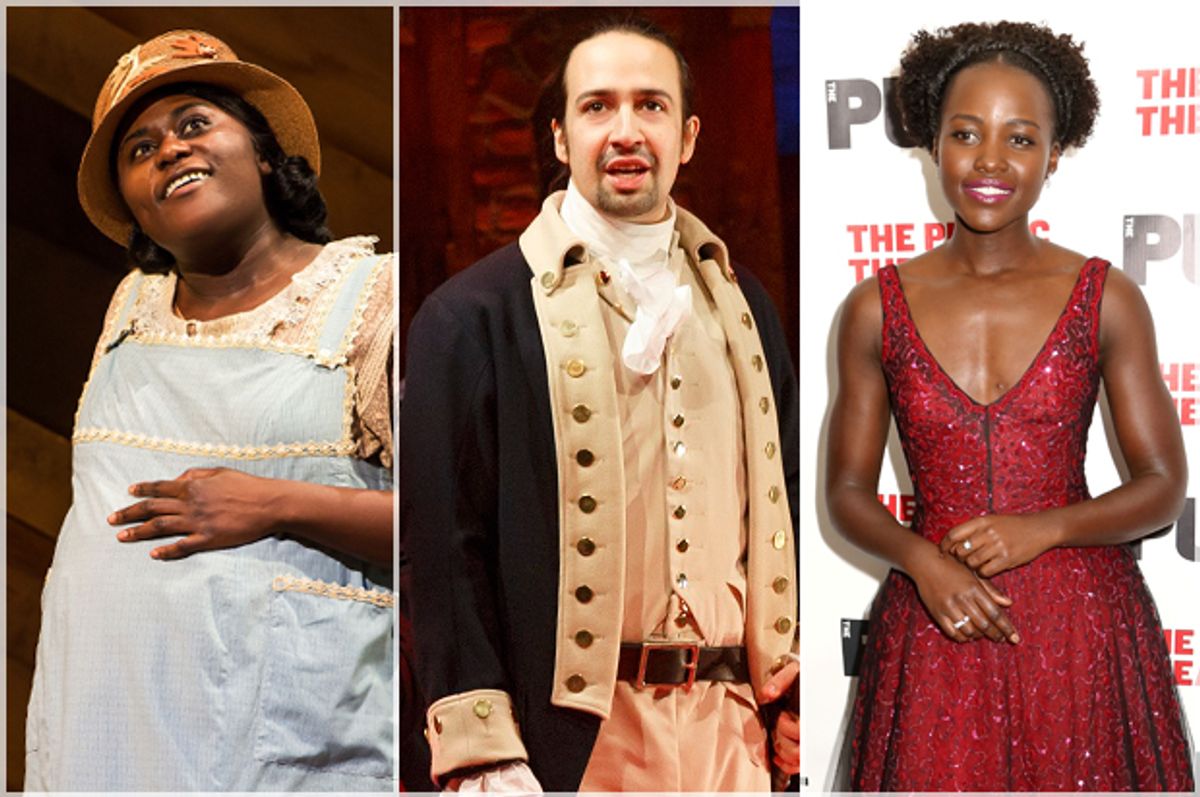 Lupita Nyong'o doesn’t want to be your sassy BFF. In an essay for Lena Dunham’s Lenny Letter, the actress discussed her decision to decamp for Broadway following her Oscar-winning turn in Steve McQueen’s “12 Years a Slave.” Since 2014, Nyong'o has starred in just a handful of films. The Kenyan-Mexican actress had a small role in “Star Wars: The Force Awakens” as Maz Kenata and most recently played a wolf mother in Jon Favreau’s successful live-action adaptation of “The Jungle Book.” Both were CGI roles, meaning that Nyong’o didn’t appear on screen.

“So often women of color are relegated to playing simple tropes: the sidekick, the best friend, the noble savage, or the clown,” Nyong’o wrote. “We are confined to being a simple and symbolic peripheral character—one who doesn’t have her own journey or emotional landscape.” Instead of playing yet another trope, the actress chose to star in “Eclipsed,” which opened off-Broadway at the Public Theater last October before making the move to the John Golden Theatre this March. Its trajectory follows another former Public production: “Hamilton,” the blockbuster musical that was just nominated for a record 16 Tonys. The hip-hop smash from Lin-Manuel Miranda bested the previous benchmark set by “Billy Elliott” and “The Producers.”

The musical, which has become a crossover pop-culture phenomenon, is expected to clean up at this year’s Tony Awards, but what’s equally notable is how many shows featuring people of color in lead roles stand alongside “Hamilton” in the 2016 nominations. In the same category in which “Hamilton” is nominated, Best Musical, the show is in competition with “Shuffle Along,” starring Tony winners Audra McDonald (“Lady Day at Emerson's Bar and Grill) and Billy Porter (“Kinky Boots”). In Best Revival of a Musical, there’s the enormously successful return of “The Color Purple,” including a best actress in a featured role nomination for Danielle Brooks, who Netflix fans know as Taystee in "Orange Is the New Black." Meanwhile, “Eclipsed” is a frontrunner for Best Play, while oddsmakers predict that Nyong’o will take home her first Tony for starring in the production.

The actress wrote the Lenny Letter op-ed after being asked by a journalist why she would choose a “small play” over the big screen. For Nyong’o, the project was personal. “Eclipsed,” which was written by Danai Gurira (you know her as Michonne on “The Walking Dead”), originated at the Yale Repertory Theater. The play—about a group of kidnapped Liberian women during the country’s civil war in 2003—was Nyong’o’s breakout role on the stage, and it was her star power that brought “Eclipsed” to New York. As Forbes notes, the actress was the “driving force” behind the play’s successful stint at the Public, one that proved groundbreaking for Broadway. “Eclipsed” marked the first time a show on Broadway was produced, written, and directed by a an all-black female creative team.

The Broadway of today is increasingly offering a much-needed contrast to #OscarsSoWhite, the hashtag campaign created by April Reign that pointed out the lack of inclusion at the Academy Awards. For the past two years, the Oscars’ all-white voting body elected a group of nominees that looked exactly like they did; not a single person of color was nominated for an acting award. Even outside of the Tony pool, a number of successful productions spotlight a wave of diverse voices changing the face of theater today. There’s “On Your Feet,” a jukebox musical about the life and career of Gloria Estefan, and “Allegiance,” starring George Takei and Lea Salonga. The latter is based on Takei’s own experience as a victim of Japanese internment during World War II.

Salonga told Indiewire that she didn’t think she’d ever see the day where a show like “Allegiance” was produced, let alone receive such a warm embrace from audiences and critics. “Whether it’s providential, coincidence, or meant to be, the fact is what’s happening on Broadway is so diverse it’s almost utopian,” the Tony winner said. “It shows how many stories are out there that should be told, and can be told—so many experiences that make America what it is.” Adding to Broadway’s recent list of firsts is “Spring Awakening,” the first-ever musical to feature a performer in a wheelchair. The production, which also features ASL interpretation, was brought to Broadway by DeafWest, which specializes in theater for the disability community.

To make Broadway more inclusive, these shows are changing the architecture of how the industry operates—from the ground up. As Mashable notes, casting Ali Stroker in “Spring Awakening” meant that the theater in which the show was housed, Brooks Atkinson Theater, would have to become more accommodating to the disability community. “Stroker’s casting meant that for the first time, the backstage of a theater had to be made 100% accessible,” Mashable’s Aliza Weinberger notes. However, it will remain a challenge to bring other theaters up to the same standards: “Broadway theaters are very old, which means they’re also small—with limited accessible seats, many stairs, and few 100% accessible bathrooms.”

In order to change the Great White Way, many shows are also focused on changing its audience. In a demographic study by the Broadway League, the group found that 80 percent of its patrons are white and predominantly middle-to-upper class. When Samuel L. Jackson appeared in Katori Hall's MLK-themed play “The Mountaintop,” the actor told USA Today, “It is called the Great White Way. The people who will see it are either affluent or black people who have saved some money for a special event, or maybe someone got them tickets.” The same issue has faced previous Broadway productions like “The Trip to Bountiful” and “A Raisin in the Sun”: You can build it, but will the audience the show is meant for be able to afford to come?

But shows are tackling the problem of financial accessibility in innovative ways. “Eclipsed,” for instance, pledged to bring young women who would not otherwise have the luxury to experience a Broadway production as part of its 10,000 Girls initiative. Tickets for “Hamilton” will set you back hundreds of dollars, unless you’re one of the lucky winners of the daily lottery. Miranda, however, has been committed to performing scenes from the show on the streets outside the theater—for those who aren’t lucky enough to get their hands on a $10 ticket. As the New York Times reported, “Hamilton” also pledged to “bring 20,000 New York City 11th graders, all from schools with high percentages of students from low-income families” to the show.

2016 marks an incredible step forward from last year, when “The King and I” was the only production to win a Tony for a performer of color, but a great deal of work remains left to be done. As The Guardian’s Alexis Soloski pointed out in 2015, the season featured “no new plays by women or writers of color—no old ones either.” Soloski writes: “As reported in American Theater, last season less than a quarter of plays produced in America and written in the last 50 years were by women, despite women making up a preponderance of the theatergoing population. An accounting of the previous three seasons showed only 12% of American plays were penned by writers of color.” Last year, the Manhattan Theater Club sparked outrage when it was revealed that every single production in its yearly schedule was penned by a white man.

Broadway’s renaissance of diversity, it must also be said, is way overdue. Long-running shows like “Les Miserables,” which debuted in Paris back in 1980, only recently welcomed a person of color to the lead cast. Kyle Jean-Baptiste, who passed away earlier this year following a tragic accident, was cast as Broadway’s first-ever black Jean Valjean in 2015. The year prior, Norm Lewis became the first African-American to don the white mask in Andrew Lloyd Webber’s long-running "Phantom of the Opera." Oscar-nominee Sophie Okonedo (“Hotel Rwanda”) joined Saoirse Ronan in this year’s revival of Arthur Miller’s “The Crucible,” but how many white actresses got to play the part before Broadway decided audiences could accept a black Elizabeth Proctor?

Other shows will continue the historic push to make Broadway, a industry long known for favoring white stories made for white audiences, look like America today. Following the success of “The Wiz” on NBC earlier this year, the musical is slated for a 2016-2017 revival. Playbill also notes that there’s talk of bringing “Sweat” to the Public next season “if there is demand.” The play, which follows a diverse group of blue-collar steel tubing plant workers in one of the poorest cities in the country, was written by Lynn Nottage, who is a woman of color. “Ruined,” for which Nottage won the Pulitzer prize, stalled off-Broadway in 2009. As Indiewire’s Shoshana Greenberg writes, “works by women of color with strong roles for women of color rarely make it to Broadway.”

If there were ever a time to change that, now is the moment.