We must still fear Ted Cruz: His campaign may be over, but sadly for America there's a lot of damage he'll continue to inflict on us

Cruz's presidential aspirations are over, but he's going straight back to his role as America's Worst Senator 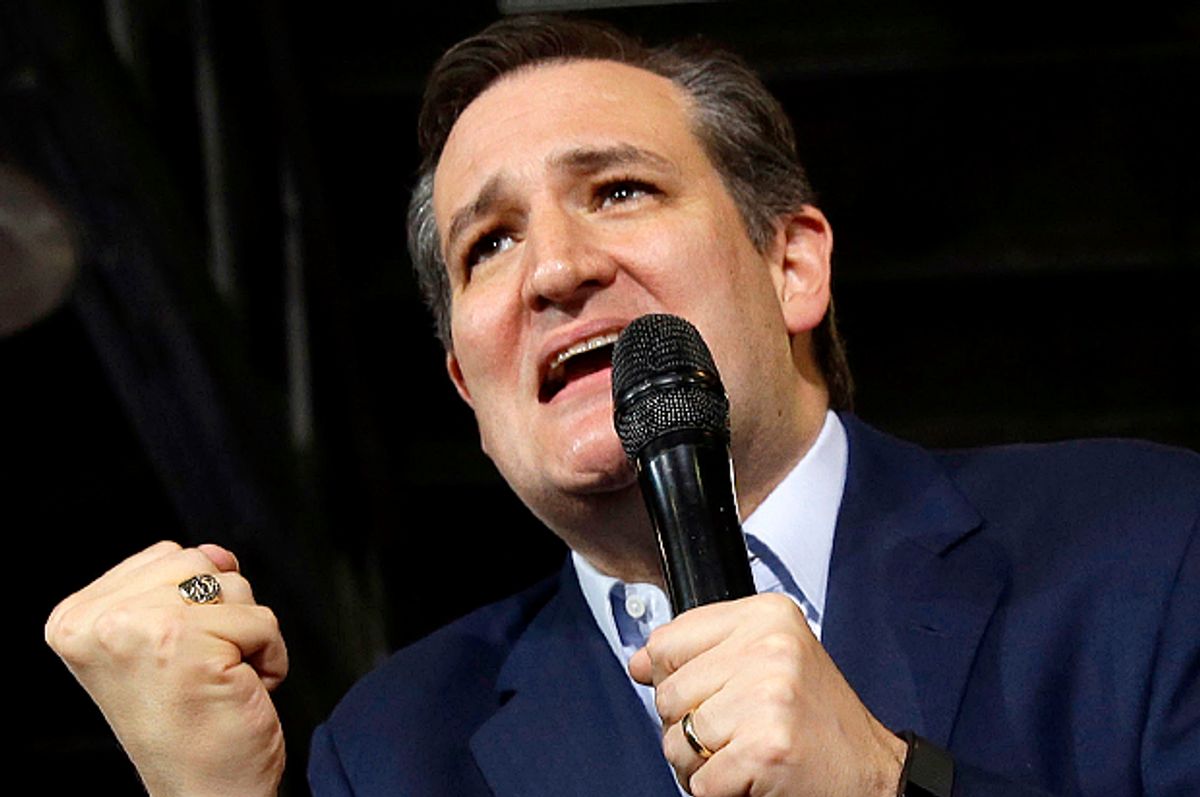 Even though it clears the path to the Donald Trump nomination, it was hard not feeling a spike of glee watching the interminably smug Ted Cruz finally admit defeat after losing to Trump in Indiana's primary on Tuesday night. To add another layer of schadenfreude to the situation, Cruz's last days were as humiliating as you can get, short of TMZ releasing nude yoga photos.

Cruz's last 48 hours:
Wife denied he was Zodiac killer
Had to deny his dad killed JFK
Smacked wife in the face on TV
Quit race
-- Cruz 2020

Alas, Twitter's character limit forces Tbogg to underplay this, because we must, in good conscience, add everything regarding Cruz's "running mate," Carly Fiorina, and this immediately gif-able moment of maximum awkwardness between the two.

But, America, while it is tempting right now to write a celebratory obituary for the career of Ted Cruz, the sad fact of the matter is that there is no way the most repulsive man in politics is going away. Cruz is a man with a distinct eau de Nixon about him, a fierce tenacity of a man certain that the reason no one seems to like him is because there's something wrong with the rest of the world and not with him.

No, Cruz is slinking back to the Senate, which will cause many of his colleagues to regret their decision not to endorse him in a bid to get him into the White House and out of their personal space. And there, fueled by bitterness and no doubt a continued belief that God has pegged him as some kind of prophet, he will continue and likely double down on the havoc he enjoys wreaking from that seat.

It is worth remembering that Cruz has been a big advocate for shutting down the government. Cruz's first big act as a freshman senator, in 2013, was to defy his Republican colleagues and start threatening a government shutdown, in hopes that he could blackmail the Democrats into repealing the Affordable Care Act. The effort turned out to be exactly the folly that everyone told him it would be, as David Fahrenthold and Katie Zezima of the Washington Post explain:

Cruz’s gambit didn’t work. Neither Senate Democrats nor Obama gave an inch on their cherished law. Instead, the government shut down for 16 days, and Republicans in Congress were blamed for it — including by other Republicans, who said they had distracted attention from the disastrous rollout of the HealthCare.gov website.

To make things worse, it's obvious that Cruz wasn't doing this out of some deeply held convictions, but because he just really likes the potential for political theater created by government shutdowns. The theatrics included a 21-hour speech that Cruz clearly hoped voters would think is a filibuster, but was in fact nothing of the sort and which had no real impact on the functioning of Senate procedure. That's right: He peed in a diaper and read "Green Eggs and Ham" on C-SPAN not because he was taking a stand on principle, but because he just really likes being on TV.

But even though the whole thing did nothing but cost the taxpayers a lot of money and confirm to everyone watching that Cruz's ego is a black hole from which no common sense can escape. But despite this, Cruz tried again last year, pushing for another government shutdown, this time demanding that the federal government quit giving Planned Parenthood money they use to make birth control pills and Pap smears cheaper for women.

While few Republicans have any love for sexually active women, the pettiness of threatening a government shutdown just to keep some people from getting condoms was a stretch too far. It also confirmed that Cruz just likes the idea of a government shutdown. It's an end for him, really, not a means.

All of this is what we can expect Cruz will get right back to doing, now that he's no longer occupied with fending off insinuations that he's a serial adulterer and a serial killer. Except, sadly, he's probably going to turn up to volume.

Do not be surprised if there's government shutdown dramas every few months, now that Cruz is back in the senate. Cruz's campaign may have run out of steam, but he still retains that hunger for attention. Being away from the endless stream of cameras that comes with a presidential campaign will leave a hole in his heart, a hole we should expect he will fill by finagling every opportunity he can to get back on TV.

Barring some great catastrophe, Hillary Clinton is likely to beat Trump in November. Do not think for a moment that Cruz will see the first female president as anything but his own personal nemesis, a villainess put on earth just so he can attack her and show off, to his evangelical base, how he is their champion against the dark forces of feminism. His sneering mug is not going away, but will be on our TVs for the next few years, as he tries to position himself as President Clinton's main enemy.

And I wouldn't rule out a run in 2020, either. Sorry, folks, but if ever there was a man who refuses to take a hint when people reject him, it's Cruz. He's got a senate seat in a state that would elect the Republican even if his name was Satan C. Hitler and an endless thirst for pointless political drama. Whatever happens next, one thing is certain: Ted Cruz is not going away anytime soon. My condolences to my fellow Americans