Dear media, please call out Trump on this: He's a tinfoil-wearing conspiracy theorist — ignoring that is irresponsible

Trump is a full-blown crackpot, and journalists should be asking him about it every time he steps out of the house 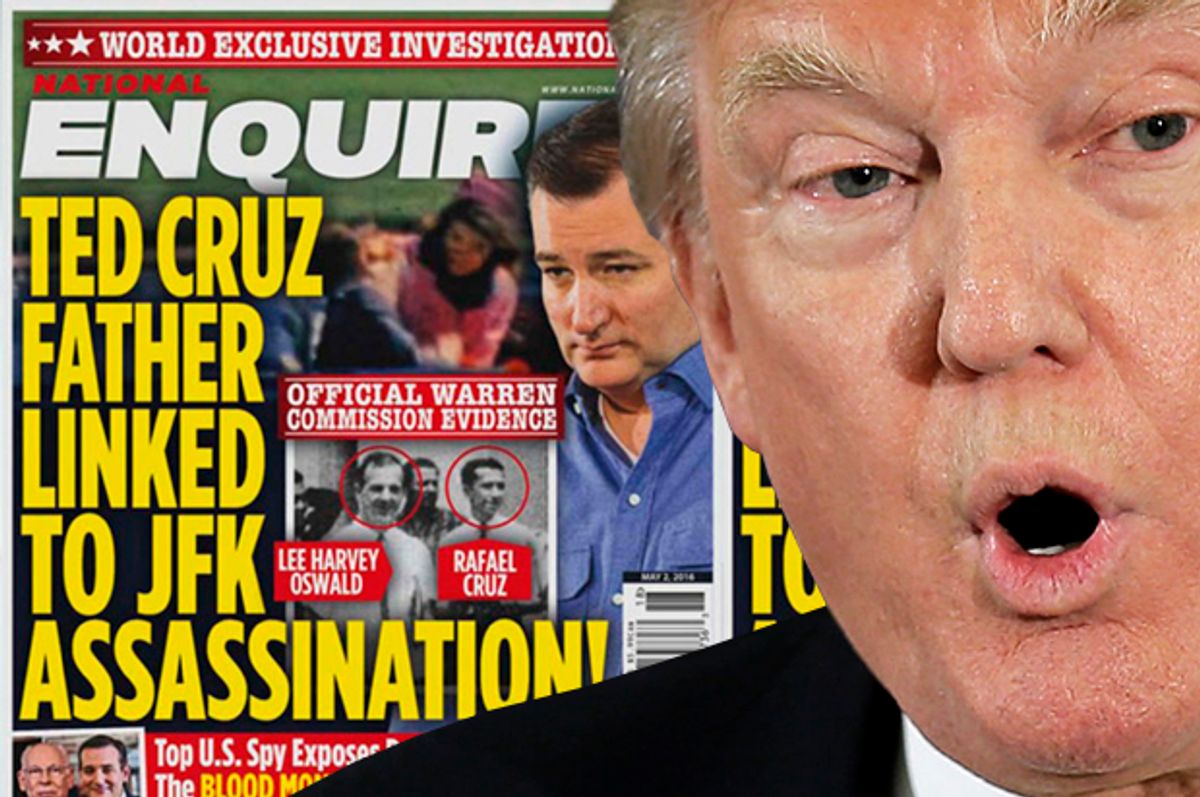 It's a moment likely to be quickly forgotten in the cacophony of humiliations that Ted Cruz endured on his way out of the presidential race: Donald Trump promoting a bizarre conspiracy theory linking Cruz's father, named Rafael Cruz, to the JFK assassination. In an interview with Fox News, Trump found a way to worm this National Enquirer headline into the conversation: And....that's it. That's all the evidence they had, that some guy who looks like Cruz's father was standing next to Lee Harvey Oswald in a picture. We don't know if that is, in fact, Cruz's father. What we do know is that the Warren Commission, where the National Enquirer got this photo, determined that Oswald acted alone and was not actually conspiring with Cuban communists, the Mafia, or space aliens. Which means that even if that is Rafael Cruz — which is a big if — it should be in no way considered evidence that he was conspiring with Oswald who, all evidence suggests, decided to shoot Kennedy all by his lonesome.

I'm not writing this as a defense of Rafael Cruz, who is himself a loathsome piece of work who is also prone to conspiracy theories and fantastical thinking. No, the reason that we should all take a moment to gander at this attack on Cruz is that it perfectly distills one of the most worrisome aspects of the Trump candidacy, alongside his misogyny, racism, and demagoguery: He is a conspiracy theorist through-and-through. And he is not getting called out about this nearly enough by the media, even though debunking conspiracy theories really should be one of the easiest aspects of a journalist's job.

Trump is basically inviting journalists to go after him on this front. While the kids these days like to crack jokes about jet fuel and steel beams, the JFK assassination is really the classic rock version of an event that attracts every crackpot theory imaginable. Finding thin threads to attach every person you don't like to the apparently worldwide conspiracy to kill the President is the calling card for those who believe the world is run by shadowy cabals that apparently involve every person who isn't raving about them on the internet. Trump might as well have accused Rafael Cruz of having an affair with Marilyn Monroe, while he was at it.

Of course, Trump denies having accused Cruz's father of conspiring to assassinate JFK. Like all good conspiracy theorists, he communicates his ideas through "asking questions" and insinuations.

"His father was with Lee Harvey Oswald prior to Oswald's being — you know, shot. I mean, the whole thing is ridiculous," Trump said in the original interview on Tuesday.

"I mean, what was he doing — what was he doing with Lee Harvey Oswald shortly before the death? Before the shooting," he continued, lest you were worried that he was calling the conspiracy theory ridiculous, as opposed to calling Rafael Cruz's behavior ridiculous. Because when you are accusing someone of murdering a sitting president, the word "ridiculous" is the first one that comes to mind.

The bullshit denials continued even after Cruz dropped out.

"You don't really believe that Ted Cruz's father had anything to do with the assassination of President Kennedy," Wolf Blitzer asked Trump on CNN on Wednesday.

"I wouldn't believe it, but I did say 'let people read it,'" Trump added.

Step two: When called out for it, clutch your chest and declare, "Why I never!"

Step three: Claim that you were "just asking questions".  Questions which are clearly meant to point people towards believing a conspiracy theory.

Pretty much all conspiracy theorists use this strategy. The reason "jet fuel can't melt steel beams" has become a punchline on the internet is that 9/11 truthers tend to frame their argument as a series of "questions" about supposed discrepancies in the official reports on 9/11, rather than straightforwardly saying that George W. Bush or lizard people or whatever orchestrated the whole thing.

(The irony is that 9/11 was a conspiracy: The hijackers conspired with the guidance of Al Qaeda to do this. But what makes something a "conspiracy theory" is the belief that shadowy figures are conspiring in secret and getting away with it, with the only people who somehow see this being wild-eyed nuts screaming about it on internet forums.)

Similarly, anti-vaccination conspiracy theorists rarely state straightforwardly that they believe vaccines cause autism, which has been disproved time and time again. Instead, they claim that they are "just asking questions" about vaccine safety, and act like pro-science forces are somehow suppressing free inquiry by calling bullshit on that.

The most recent example of this happened with the controversy over an anti-vaccination film that was set to be screened at the Tribeca Film Festival. When pro-science forces called foul, Robert De Niro argued, "we believe it is critical that all of the issues surrounding the causes of autism be openly discussed and examined." (He eventually caved and pulled the anti-vaccine propaganda film.)

Conspiracy theorists invariably hide behind the banner of free inquiry, but they should not be believed on this front, for a very simple reason: People who actually believe in free inquiry will listen to and take evidence seriously.

Conspiracy theorists, on the other hand, reject evidence against their pet theories in favor of continuing to ask "questions" that they already got the answer to. In the face of evidence that vaccines do not cause autism, they reply with some variation of, "But what if they did?" But they don't. And around and around again. It's a strategy designed to make it seem like there is mystery where there is not and reason to continue clinging to your conspiracy theory.

And Donald Trump is well-practiced at this, a devout follower of the cult of the conspiracy theory. Trump and his main campaign surrogates are all buddy-buddy with Alex Jones, the nation's leading conspiracy theorist, a man who probably can't get a donut from a coffee shop without wondering if it's a hallucination caused by chemtrails.

Just as importantly, Trump was a major factor in stoking one of the ugliest and most racist conspiracy theories of the past decade, the claim that Barack Obama was not born in the United States and therefore not eligible to be the president. As my colleague Sean Illing reminded us this week, Trump launched into national politics by touting birther conspiracy theories, and indeed portrayed himself as the leader of the birther movement.

Now while Trump is currently trying to deflect this — blaming Hillary Clinton, for instance — it's important that the media not let him get away with this. Remember, step two of being a conspiracy theorist is to deflect criticism by acting all offended that anyone thinks you believe the thing you clearly believe.

The other strategy is to frame your conspiracy theorizing as "just asking questions", and that is what Trump has done and refuses to apologize for doing when it comes to Obama. He led a campaign demanding that Obama produce the "long form" birth certificate, which was clearly not a campaign about good faith concerns, but about stoking beliefs that Obama was hiding something.

But when Obama gave Trump and his fellow just-asking-questioners (or, as they are commonly known, JAQ-offs) what they wanted, his long form birth certificate, did these models of free inquiry say, "Oh gosh, you're right! As lovers of evidence and transparency, we are so grateful all our questions are answered and we apologize profusely for having any doubts." No, they did not.

Instead, Trump deflects questions and leaves an air of mystery about what he believes, often reacting like he's the victim here when journalists ask him about it. Classic conspiracy theorist behavior, meant to insinuate you're being victimized by a censorious media for daring the speak the truth.

Which is all the more reason, now that he's the nominee, for journalists not to drop this. Trump needs to be asked about this, over and over and over again, until he actually provides an answer and stops leaning on conspiracy theory tropes about how he's just asking questions and insinuating the rest of us can't handle the truth. Because, while most Republicans these days wallow in some conspiracy theory nonsense (global warming denialism, creationism), Trump is really taking it to the next level. Americans need to know that the Republican nominee is a full-blown tinfoil-wearing crackpot before they make their voting decisions in November.