Joe Paterno failed even more kids: His legacy is still a staggering refusal to stand up for abuse victims 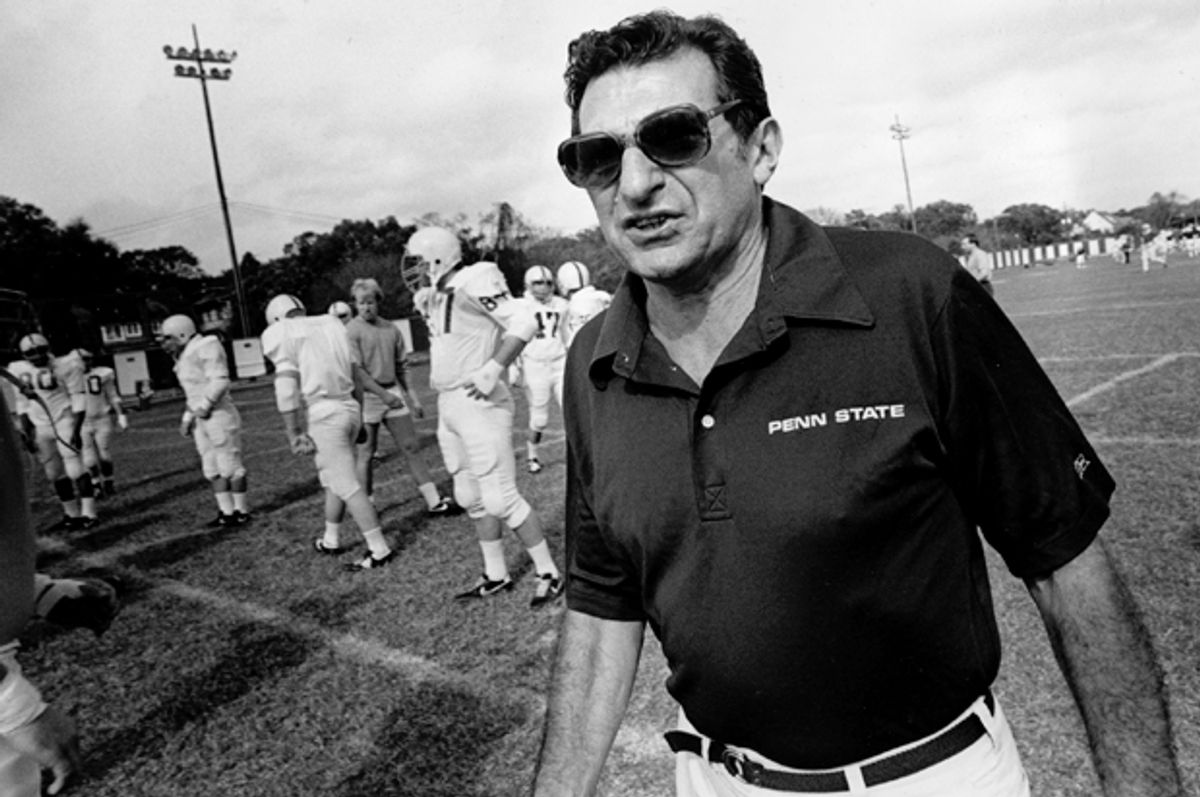 I don't know there's an afterlife, or if we are held accountable in it for our misdeeds on earth, but there sure are days when it's hard not to hope that there's some kind of cosmic justice being meted out somewhere for guys like Joe Paterno. Because while his life ended in 2012, apparently the full extent of his moral accountability is still being calculated.

In new court papers this week in a lawsuit between Penn State and insurance company Pennsylvania Manufacturer's Association, Philadelphia County judge Gary Glazer asserts that the former College Football Hall of Famer knew a full twelve years earlier than previously alleged that his Penn State colleague Jerry Sandusky had been accused of sexually abusing children. He writes, "PMA claims Sandusky committed several acts of molestation early in his career at PSU: in 1976, a child allegedly reported to PSU’s Head Football Coach Joseph Paterno, that he (the child) was sexually molested by Sandusky."

Paterno was fired in the fall of 2011, after revelations that Sandusky had molested several boys who were involved in his Second Mile program for youth. The timeline of Sandusky's actions has been repeatedly adjusted — and pushed earlier and earlier — over the ensuing years. The original linchpin of the case was a 2009 investigation of incidents involving a then-teenaged boy who claimed Sandusky has molested him over the course of years, beginning when he was ten. That trail led to other allegations, including a mother's 1998 report to state police that Sandusky had molested her then 12 year-old son in a locker room shower. Sandusky admitted to showering with the boy and "hugging" him, and promised not to do it again. As the New York Times reported in 2011, "In the end, no prosecution was undertaken. The child welfare agency did not take action. And, according to prosecutors, the commander of the university’s campus police force told his detective, Ronald Schreffler, to close the case."

Sandusky is now serving to 30 to 60 years in prison "on 45 convictions of raping, abusing and assaulting 10 boys" — and continues to face allegations of even more abuses. Last year, another former Second Mile participant came forward to claim he'd been abused by Sandusky in 1988. And in Glazer's decision this week — which he formed based on still-sealed depositions from alleged victims — he writes, "In 1987, a PSU Assistant Coach is alleged to have witnessed inappropriate contact between Sandusky and a child at a PSU facility; in 1988, another PSU Assistant Coach reportedly witnessed sexual contact between Sandusky and a child; and also in 1988, a child’s report of his molestation by Sandusky was allegedly referred to PSU’s Athletic Director." To put this in context, if true, Paterno still got to hang on to his prestigious job, working with someone who is now a convicted child rapist, for another 35 years after that earliest report.

The timeframe of what Sandusky did — and who knew about what and when — forms the basis of the suit to determine who should be financially accountable in victim lawsuits. As PennLive explains, "The insurance case involves big money for Penn State, which hopes to be reimbursed for most of the $60 million-plus it has paid in recent years to settle nearly 30 civil claims pertaining to abuse by Sandusky."

It's true that Paterno is not around to address these claims that go back forty years. But it's also boggling that there can be any ambiguity that Joe Paterno failed the children whom his colleague preyed upon, and he failed them spectacularly and for a long time. It may never be proven definitively when he made a choice, but he made a choice. And yet, writer David Jones on Friday mused, "Demonize or deify: Will latest Paterno allegation change anyone's opinion?" and wondered if Paterno "fully recognized Sandusky's horrors and actively camouflaged them to protect his program or was simply a befuddled and single-minded old man who dismissed them with some degree of negligence, as did good men within the Catholic Church amid their priest scandals."

And elsewhere, PennLive reports that "Parts of Penn State nation still are deeply divided over questions like whether Paterno was wrongly fired in the wake of Sandusky's November 2011 arrest, and whether the coach's Beaver Stadium statue — taken down in the summer of 2012 — should be reinstalled there or somewhere else on the campus." You've got to be kidding me.

This was a man who at the very least did not respond to former Penn State quarterback Mike McQueary's 2001 report to him that, in Paterno's own words, McQueary had seen "a mature person who was fondling, whatever you might call it — I’m not sure what the term would be — a young boy" by calling  the police or even immediately contacting his supervisor, because, "It was a Saturday morning and I didn’t want to interfere with their weekends." Can anyone ever still believe a guy like that should be deified? That he deserves statues? I'll say this — he deserves to not be forgotten. He deserves to be remembered for every single thing he did — and didn't do.