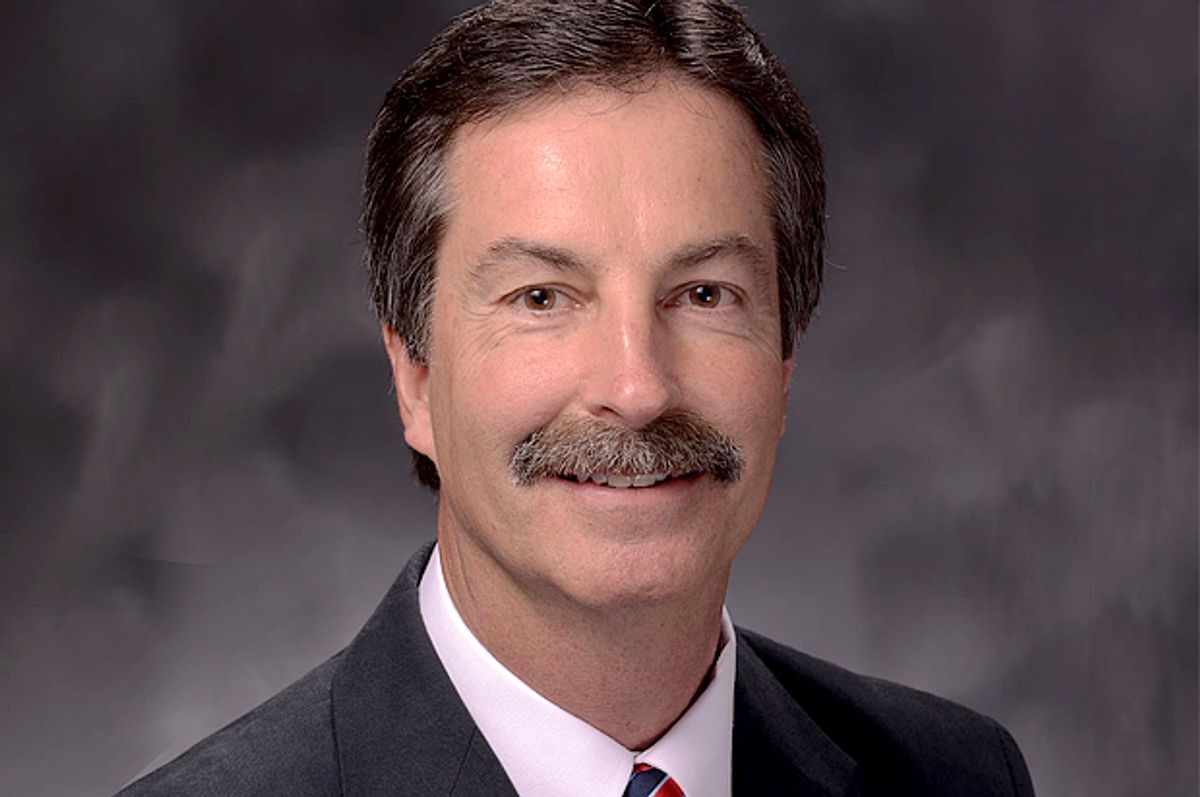 A month after threatening to imprison a Planned Parenthood official for not handing over a list of women who've gotten abortions, Missouri Republicans are at it again. The majority of the Missouri state house voted for a bill that would define fertilized eggs as "persons" that "have a natural right to life, liberty, the pursuit of happiness and the enjoyment of the gains of their own industry."

The bill and the debate around it is a veritable smorgasbord of right-wing nuttiness, starting with the apparent belief that zygotes are industrious workers who can feel happiness and own things. As a reminder, this is what a zygote looks like. It doesn't have brains or skin or eyes or much in the way of neurons, but in anti-choice eyes, it's a kindergartener playing catch and scribbling away in coloring books.

With the opening premise being so ridiculous, it's little wonder that things spiraled quickly out of control with this bill. Despite the fact that talking about rape never works out well for anti-choicers, state representative Tila Hubrecht was eager to argue that rape victims who get pregnant should be grateful that such a wonderful blessing has come their way.

"Sometimes bad things happen, and they're horrible things," Hubrecht began, talking about rape like it's an unfortunate weather event instead of a violent crime someone chooses to commit. "But sometimes God can give us a silver lining through the birth of a child."

At this rate, Republicans might soon be passing laws requiring pregnant rape victims to write "thank you" letters to their rapists.

But this is the rhetorical corner that anti-choicers have painted themselves into. Unable to admit that they want to ban abortion to punish and control women, they instead have to argue that pregnancy is a rare gift, like winning the lottery, that any woman should want at any point in time, and that women are being denied this precious gift by abortionists who want to steal their babies because they are sadistic murderers. When that's your line, you kind of have to start acting like rapists are doing their victims a favor by getting them pregnant.

In case discussion about how forced childbirth is supposedly the "silver lining" awaiting rape victims wasn't bad enough, this bill comes bundled with a whole bunch of racist trolling of activists fighting against police violence.

When the first version of this bill was introduced, by Rep. Mike Moon, it was called the "All Lives Matter" bill, an obvious swipe at Black Lives Matters protesters, who have been working heavily in Missouri after the shooting of Michael Brown in Ferguson, Missouri. The bill's name was changed when anti-racism activists accused Moon of co-opting a very serious movement, but the basic concept of the bill hasn't changed.

And really, "co-option" is probably underselling how ugly and racist Moon was being. Anti-choicers across the country have latched onto this whole "all lives matter" thing, which is straightforwardly asking the country to believe that fertilized eggs have value that is equal to or perhaps greater than the lives of actual men and women (and boys and girls) who have died from police brutality.

Anti-choice activists have become obsessed, in the past decade, with racist trolling around the abortion question. It's common for anti-choicers to look at the higher rates of abortion among black women and argue that it's a "black genocide." But since the abortion decision is being made by women themselves, the implication is that black women are the masterminds behind this supposed "black genocide." It's riffing off old racist stereotypes of black women as sexually immoral and negligent mothers, and it's racist to its core.

Under the circumstances, adding the "all lives matter" trolling to the situation is unbearably cruel. The unspoken but crystal-clear implication is that black women are the real problem for the black community, that a black woman choosing to have an abortion is somehow worse than a police officer gunning down an unarmed black teenager for no good reason.

Consider how much the mothers of the killed have played a major role in the Black Lives Matter movement, and the full extent of the insult should really become clear. This is about Moon trying to replace the image of black mothers grieving with a racist stereotype about black women supposedly killing their own children.

This is where we're at with anti-choicers: rhetoric that treats women who seek abortions and doctors who help them as villains, just as truly vile behavior like rape and killing of unarmed teenagers is being minimized. But beyond just the rhetoric, the bill itself is incredibly cruel.

As with all other attempts to define fertilized eggs as "persons," the Missouri bill has the potential to do a lot more than ban abortion, which is itself just about punishing women for not living up to some stupid right-wing ideal of chastity and compulsory motherhood. The anti-choice movement has spent more than a decade promoting the myth that female-controlled hormonal methods of contraception work by "killing" fertilized eggs, which they equate with abortion. Under the circumstances, it's not a leap to guess that the plan, if one of these personhood bills becomes law, is to use it to start angling to ban the birth control pill and the IUD.

Equally troubling is the possibility that this law will be used to criminalize stillbirth and even miscarriage, something that anti-choicers have been trying to do through backdoor methods in other states. Women are being accused of "killing" children when they miscarry or suffer stillbirth, usually because they used drugs, but in at least one case because she delayed getting a C-section.

Women of color tend to be prosecuted more for stillbirth and miscarriage already. But in Missouri, the personhood bill was written using language that specifically implies that women of color are a unique threat to their children and need to be policed lest they are a danger to the "unborn." It's a situation perfectly set up to terrorize women, especially women of color, for daring to do things like take birth control pills or for having a miscarriage.