Paul Ryan's anti-Trump ploy: The speaker's positioning himself to profit from a Trump collapse 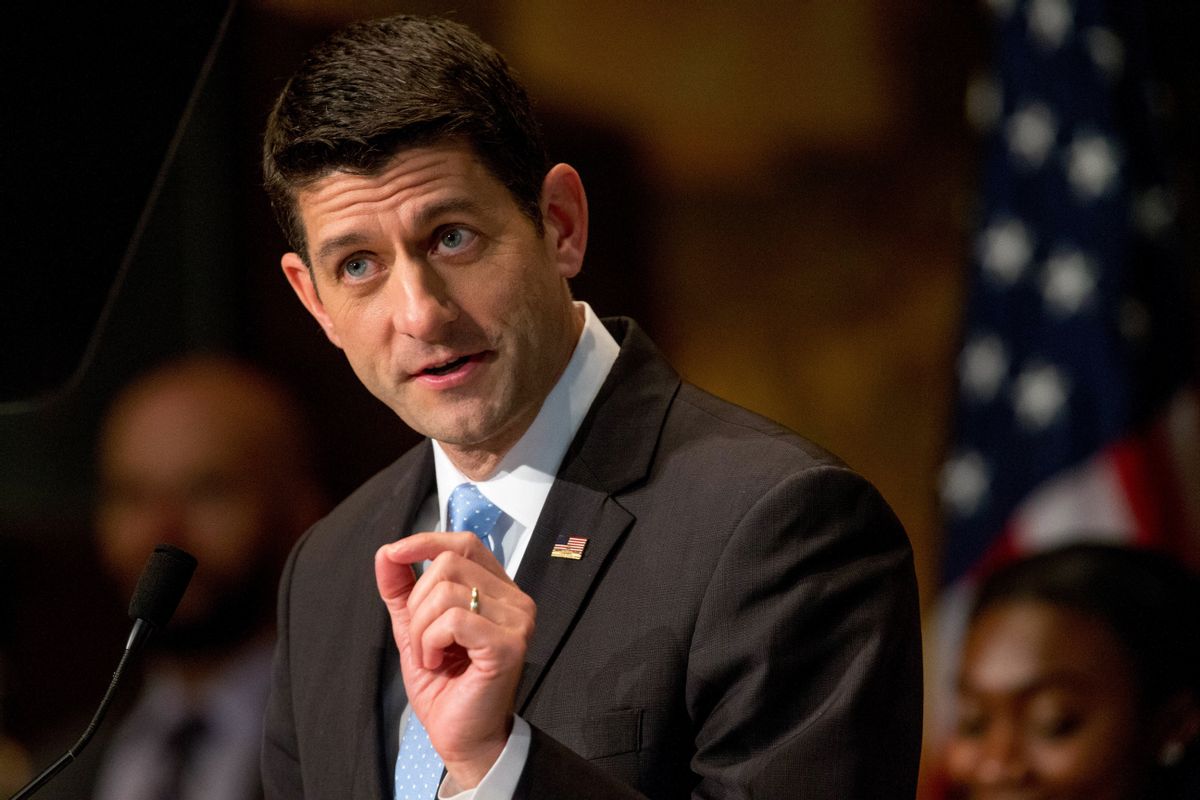 House Speaker Paul Ryan made big news yesterday on CNN when he said that he was not quite ready to support his party’s presumptive presidential nominee, Donald Trump. There is virtue, of course, in refusing to back a manifestly unqualified and bigoted jabberwock like Trump, but Ryan made clear that his endorsement was merely withheld, not denied. “I hope” to endorse Trump, Ryan said, “and I want to,” but Trump had to meet some of the Speaker’s terms first.

Per Ryan, Trump has to “unify” the party before he can expect to get his support. He didn’t explain specifically what that meant, but it has something to do with Trump proving to the Ryan wing of the party that he cares about conservative dogma. “I think conservatives want to know, does he share our values and our principles on limited government, the proper role of the executive, adherence to the Constitution?” Ryan said.

I’m pretty confident that Ryan is not naïve enough to think that he can transform Donald Trump into conservative ideologue, and I’m also pretty sure that Ryan understands he has no real leverage here. Trump is riding high as the top choice of the Republican electorate, and he soundly dominated a vast field of candidates who are far more in line with the Ryan vision of conservatism than he is. Trump’s theory of the race is that the GOP base cares more about nativist resentment and populist agitation than tax cuts and entitlement reform, and thus far he’s been proven correct.

Moreover, Ryan left his metric of party “unification” completely undefined. Trump, meanwhile, is already claiming support from former critics (like Rick Perry), supporters of his rivals (like Mike Pence), leaders in Congress (like Mitch McConnell), blue-state Republicans up for reelection (like Kelly Ayotte), and party elders (like John McCain). Trump can point to all this and say to Ryan “I am uniting the party; you’re the one causing division.” My guess is that Trump will continue on precisely as planned and Ryan will eventually find some pretext to give in and offer his support (it will likely have something to do with how uniquely bad a president Hillary Clinton would be).

So why would Ryan make this dramatic gesture and offer terms he know won’t be met? For the short-term he’s giving cover to House members who don’t want to get behind Trump. But really this is all about Paul Ryan and his ambition to be the guy who picks up all the pieces after Trumpism destroys the GOP. That’s the reason Ryan gave a big speech in the middle of a fractious presidential primary laying out his optimistic vision of American governance. That’s the reason Ryan’s office has been releasing very slick “ads” promoting this optimistic vision of government. That’s the reason he’s preparing a policy agenda designed to allow Republicans to run on something other than the Trump platform. And that’s the reason Ryan set himself at odds with Trump at the precise moment that Trump completed his conquest of the GOP.

If Ryan’s primary concern is party unity, then it seems a bit odd for him to publicly distance himself from the nominee his party overwhelmingly voted for – unless, of course, he understands that a crack-up is inevitable and he wants to take advantage of it. It seems likely that the GOP is heading for a split between the pro-Trump and anti-Trump factions of the GOP, and Ryan wants to be the leader of the anti-Trumps. If, as is generally assumed, Trump is all but certain to lose the general election, then the leaderless and hopelessly divided GOP will find itself casting about for a new leader, and Paul Ryan will be there making the case that he tried offering a positive alternative to Trumpism.