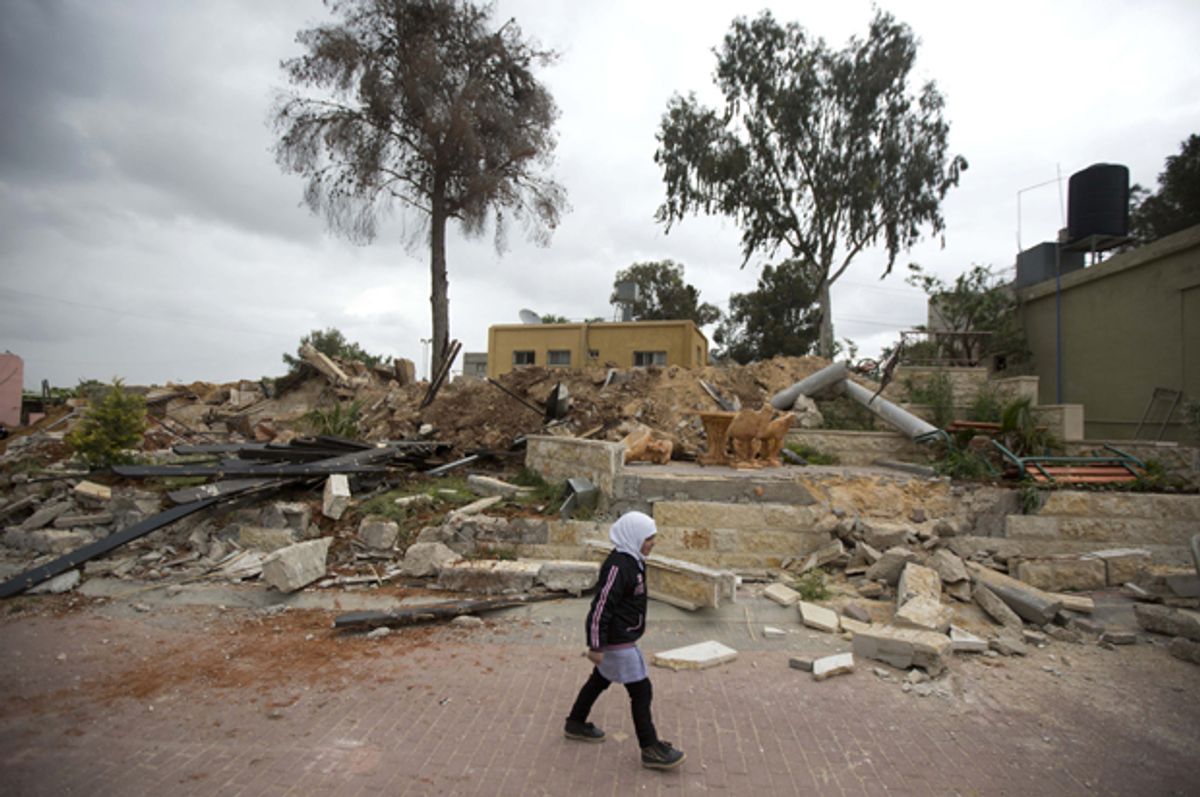 A Palestinian girl passes the ruins of a children's garden after it was demolished by Israeli troops in the village of Za'tara near the West Bank city of Nablus, April 12, 2016. (AP/Majdi Mohammed)
--

Support for Palestinians is growing among Americans, and particularly among progressives and the youth, according to a new report.

The number of Americans sympathizing with Palestinians has risen by 5 percent since July 2014, when Israel was waging a destructive war in the Gaza Strip, a study by leading polling agency Pew reveals.

Liberal Democrats and supporters of presidential candidate Bernie Sanders are more likely to support the Palestinians than Israel, Pew found.

Support for Israel still remains strong among Americans. Just over half of Americans, 54 percent, say they support Israel, while nearly one-fifth, 19 percent, support the Palestinians.

Yet behind these figures, journalist Ali Abunimah pointed out that support for Palestinians has tripled among American youth.

The number of millennials who back Israel has decreased slightly since 2006, and hovers around 43 percent. Americans' positions on Israel-Palestine are heavily split on political lines. Pew notes that there is "a persistent partisan gap in sympathies for Israel and the Palestinians."

The more progressive and the younger an American is, the more likely they are to sympathize with Palestinians.

More than half, 53 percent, of conservative and moderate Democrats support Israel, with just 19 percent backing Palestinians. The only other group that has more support for Palestinians than for Israel are supporters of presidential candidate Bernie Sanders, with 39 percent backing the Palestinians and 33 supporting Israel.

Sanders has changed the discourse on Israel-Palestine in the U.S. He has publicly criticized Israel's 2014 bombing campaign in Gaza, echoing human rights organizations and the U.N., which accused the Israeli military of carrying out disproportionate and indiscriminate attacks that amount to war crimes, as even the U.S. State Department has acknowledged.

The self-proclaimed democratic socialist and longtime independent Vermont senator is also the only presidential candidate to have pledged to be neutral on Israel-Palestine.

Almost half, 47 percent, of the supporters of Democratic presidential front-runner Hillary Clinton would support Israel in a dispute, while just over one-quarter, 27 percent, would back the Palestinians.

Clinton has expressed steadfast support for Israel, and pledged to meet with hard-line right-wing Israeli Prime Minister Benjamin Netanyahu in her first month in office. The extremely hawkish former secretary of state has also attacked Sanders for promising neutrality.

Conservatives, on the other hand, are overwhelmingly pro-Israel.

More than three-quarters of the supporters of presumed Republican presidential nominee Donald Trump and of former candidates Ted Cruz and John Kasich support Israel. Just 7 percent or less of these supporters back the Palestinians.

Independents largely reflect the overall views of the U.S. population. But independents who lean Democrat are also much more supportive of the Palestinians, with about one-third backing Israel and another one-third supporting Palestinians.

Political views on Israel-Palestine are changing in the U.S., slowly but surely.