"'The Lion King' is an extraordinarily sexual film": Inside the fascinating, misunderstood world of furries

Salon talks to the director of "Fursonas," a new documentary about the people inside the animal suits 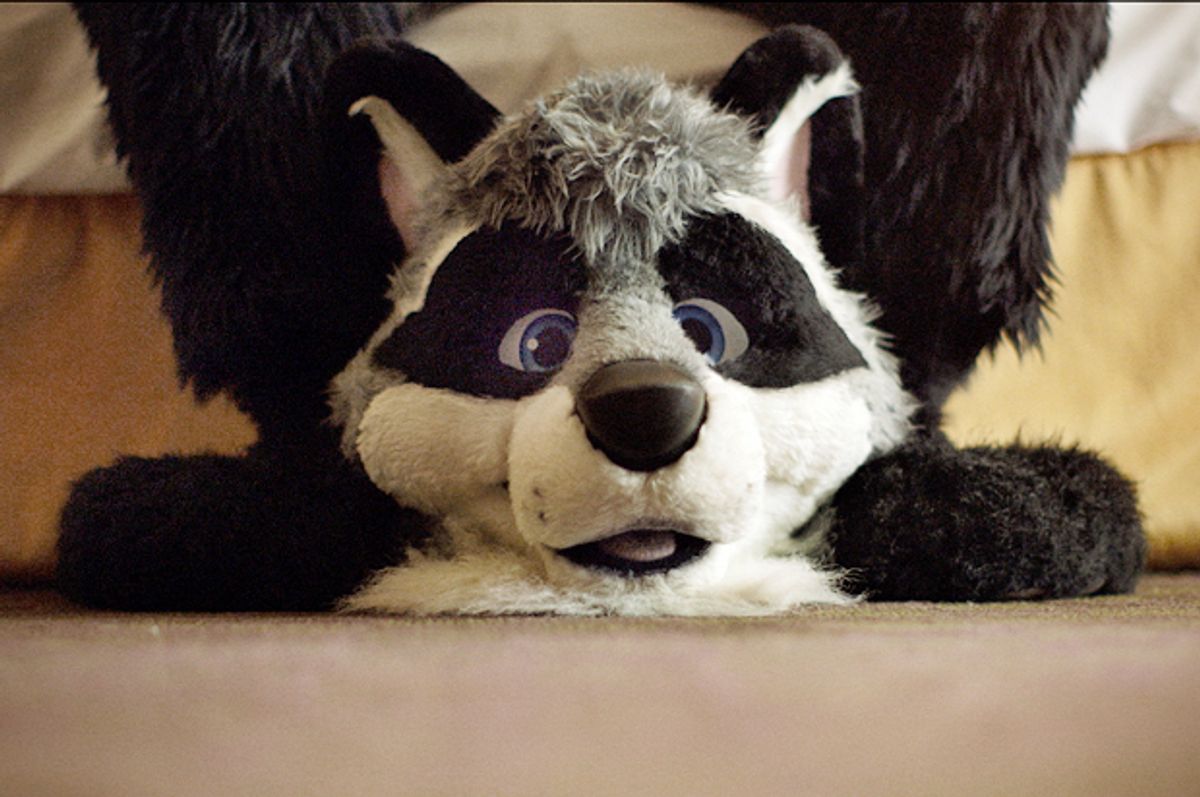 Furries are adults who assume creative/fantasy identities and dress up in fur suits. They are often ridiculed for their behavior, which is, by and large, assumed to be sexual. The new documentary, “Fursonas,” available on VOD now, attempts to demystify members of this subculture by—ahem—fleshing them out as humans.

Directed by Dominic Rodriguez (himself a furry, a wolf named Video), the film introduces characters like Diezel, who found his inner furry by working as a mascot; Skye, who enjoys the friendship and dance competitions at furry conventions; Freya, a mother who hopes her young daughter will find the same appreciation she does in costume; Bandit, who sees furry-dom as a way to memorialize his dog; and Grix and Quad, a gay couple who are equally comfortable in suit and out.

Then there is Uncle Kage, a chairman at furry conventions, who manages the way furries talk to and are represented by the media. He criticizes Boomer, a furry whose outfit is made of paper, not fur, and who went to the extreme of trying to legally change his name to Boomer the Dog, which is also the name of his favorite TV show/character; Chew Fox, whose appearance on “The Tyra Banks Show” discussed a furry taboo (apparently being a furry is like being in Fight Club); and Varka, who provides sex toys to furries, but is now fursona non grata at conventions.

“Fursonas” gives these men, women and animals an opportunity to express their thoughts about perception, tolerance and rejection. Salon spoke with Rodriguez about his film, his fur fetish and this fascinating subculture.

“Fursonas” attempts to debunk the myths about furries. Why do you think there is such curiosity, or misunderstanding regarding this subculture?

I think that when Uncle Kage was on a panel at a convention (Anthrocon), there was an insightful comment about the media, who came and pried into the underbelly about furry meetings being about sex. Because of defensiveness in the community and that attitude, there is more of a stigma. There’s a reaction from the community that thinks that the media is out to get us. That’s why we have to share all these other sides of furries. Being a furry is a positive beautiful thing in furries’ lives. People who aren’t furries want answers. They don’t understand something that they aren’t a part of.

How did you get the approval to make this documentary?

It was not approved by Anthrocon. The Anthrocon media policy is that if you are going to shoot [footage] there, you have to show the finished film to the board of directors. They recommend changes, and if you don’t make those changes you have to take that Anthrocon footage out. We didn’t, because we disagree with that policy. It’s against the rule, but it’s not against the law. We’re not looking to make the furries or the convention look bad. Scenes of Uncle Kage at the convention are available on YouTube for free. We weren’t sneaking around; we wanted to show what was right in front of our faces.

What were your criteria for the Fursonas you showcase in the film?

At first it was about finding people who would talk to me. I didn’t know anybody in the community. I reached out to people with costumes. Not everyone has a fur suit. I think the costumes are cinematic, and that the furries who wear them are passionate. They invest money and time in their suits and I wanted to talk to passionate people. I sent out 100 emails, half the people responded, and half of them spoke to me. I traveled to meet folks, but Boomer lives 20 minutes from my house. I wanted to get diversity. I didn’t know much about these people and their lives until I met them. People like Chew Fox, Varka and Uncle Kage were more people I sought out because I wanted to tell their story.

What observations do you have about why people become furries? Is it infantilization? Fantasy/role playing by unleashing the inner animal? Is it a mask to increase confidence? Is it a sexual fetish? Or all of the above?

For many people it incorporates all of the above. But for plenty of furries it is one of the above. There is enough of a sexual component to the fandom it can’t be ignored, but I don’t know how many people are into it sexually. That is not something that people are comfortable talking about. Which is totally fair. There is an innocence brought to it because of the silliness of putting on a costume, running around and having adventures. There was never a scene in the film where we explain why this person does it. It’s not about the why, it’s about the who. It was important to get to know the people. I don’t have any definitive answer.

How did you become a furry, and what have your experiences been?

What can you say about the difficulties of “coming out” as a furry, which is addressed in “Fursonas?”

When you ask, “How do you come out to your parents as a furry?”—you don’t have to. I understand why people want to be honest with themselves. I feel like I didn’t choose this. That’s how deep it runs for me. That’s why people feel the need to come out. It’s so in line with their identity. I’m lucky—I have a really awesome family. They have been supportive of me talking about these things. But not everyone has supportive people around them. I understand how Diezel might feel, keeping his furry life separate from his work life. The movie is important to show people expressing themselves, but also acknowledge the difficulties of that situation.

“I hate to bring this up,” as Uncle Kage says journalists will ask, “but what is all this about sex in fur suits?” Were you tempted to depict sex scenes with furries?

There has been controversy in the furry community over Chew Fox’s appearance on “The Tyra Banks Show.” She said something that was harmful to the community, but truthful for her. What are your thoughts on what she did?

I think that Chew Fox was not trying to hurt anyone. The most important thing was her being honest about herself. People will say she was trying to throw us under the bus. I don’t agree with that at all. I’ve had to go into the media and now talk about being a furry. I’m now very self-aware. I wouldn’t go on the “Tyra Banks Show.” It’s an exploitative treatment of its subjects. Boomer made a point about that there is no bad media. No matter what it is, there is some truth coming through. So when he goes on “Dr. Phil,” it’s more about him being on the show. “They can do what they want,” he says, “It’s me coming through, there is some truth coming through.” Many furries have responded well, and there’s a difference between how [they and] non-furries respond. A furry who interviewed me thinks Chew Fox was delighting in upsetting furries, and that’s wasn’t obvious to me at all.

How do you think your film will play with furry and non-furry audiences?

I wanted to make something furries and non-furries can get something out of. As far as who is going to accept furries, if you’re going to watch it to laugh at them, I hope you will be moved by these stories. But there are people you will never convince, and that’s fine. I’m more interested in furries’ reactions. It’s played well with non-furry audiences. It’s meant to be about more than this community and where they are right now. I’m interested to see how it will play with furries because we’re all passionate about being furries. I was terrified when I showed the film at a recent furry convention, but so far, all the furry screenings have been extremely positive experiences. It has provoked thoughtful discussion. We’re having conversations, and dialogue is positive.