I've become my hoarder mother: How my kids turned me into a pathological packrat

Mom's compulsions -- and messes -- were traumatizing and I vowed not to have them. Then I had kids 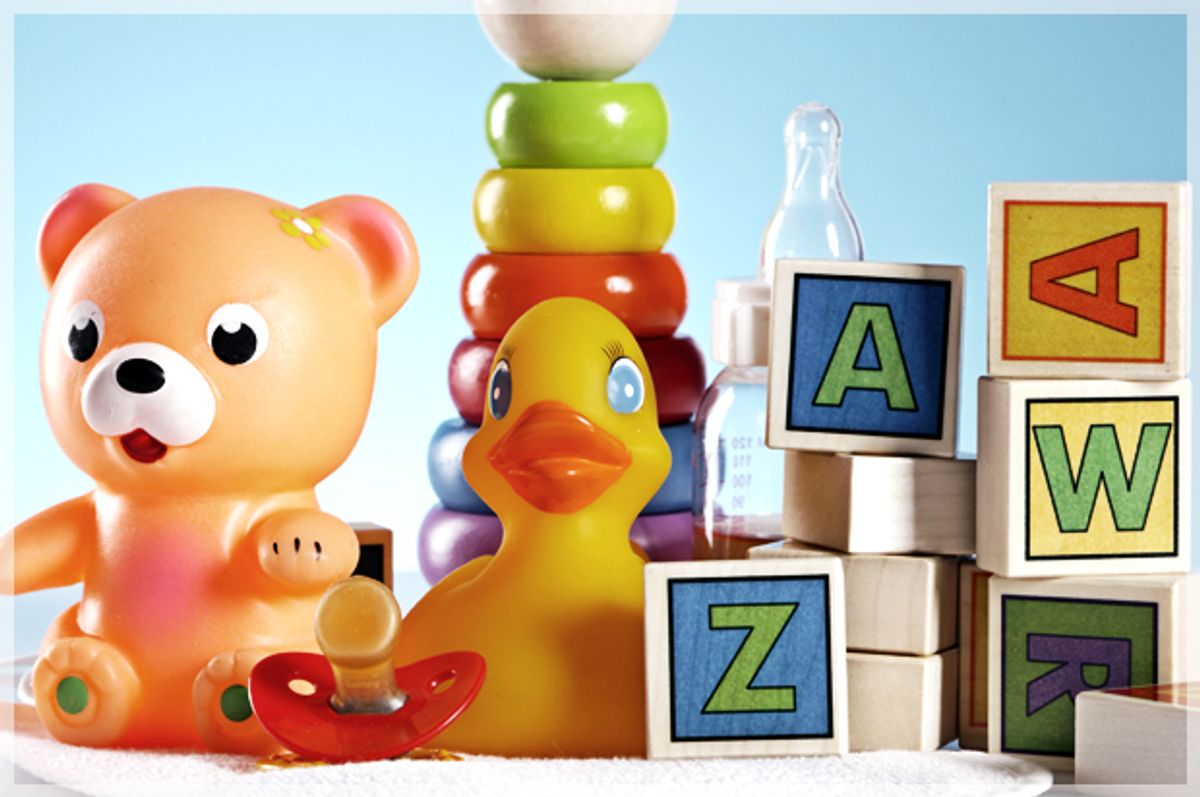 “Thanks for offering me your baby stuff,” my pregnant friend Emily said during Sunday brunch at our apartment. “Can I take it home today?”

With 4- and 1-year-old daughters, and my baby-making business closed for good, I should have been eager to donate the motor swings, elastic-band pants, nursing pillows and pump bags. Instead, I stalled.

“My back hurts too much to dig it up. How about next weekend?”

I stuffed a bagel into my mouth, repulsed by my hanging on. What was I doing, acting like my hoarder mother?

It started a few weeks earlier when I startled myself with a reluctance to throw away Zelda’s bejeweled paper plates and scraps of hand-tracings. Now my clutching was to furniture, anonymous equipment. Could I be exhibiting my mom’s pathological tendencies? I needed to toss this stash, but parting seemed painful.

My mother, born on my grandparents’ flight from the Nazis, was a refugee before knowing what home was. Years later, her house became her protective nest, and she filled it copiously, afraid her things would be taken from her. Mom purchased bargain school supplies in quantities suitable for a school. She recorded every movie to grace 1980s TV and lined the basement with her meticulously marked videocassettes. She kept each piece of my clothing, offering stained onesies (in entirely flammable polyester) when Zelda was born. As a child, I’d felt physically and emotionally blocked from her by her piles. I couldn’t fit onto the sofa; there was no room to snuggle in and watch "Thirtysomething" alongside her. I was anxious and felt unseen and unsettled in the surrounding chaos in which my school notes and bat mitzvah gifts had been lost. As a teenager, I was ashamed of the mess. I projected the ugliness onto my own body. I feared intimacy with others.

I spent my adulthood opposing Mom and decluttering, dreaming that sans objects, I’d be confident, attractive and open to love. Mom was a moody bohemian poet with stuff; I tried to be an aloof biochemist with nothing. I shunned coffee tables and ottomans and put only white clothes on my kids’ (extremely short) gift registries.

My extreme behaviors were often to my detriment. I was confused by molecular theory, and spent years figuring out what I really wanted to study and pursue as a career. I had trouble getting close to people and was once dumped for not having throw pillows (“You’re just not comfortable” my boyfriend told me). My cleaning obsession sometimes blinded me to my daughters’ needs, as when I’d wet-wiped the floor instead of rocking Zelda to sleep, or when I focused on scrubbing the broccoli-yam mash that trickled down my kitchen chair leg (and my own leg) instead of on her outstretched hand, her gleeful desire to feed me. As a child, I’d been nervous and embarrassed inviting friends over to my overly cluttered home, dreaming that a minimalist abode would make me a magnanimous host. Only once I had a white-walled, white-sofa-ed apartment, I found it impossible to entertain without staring at my guests’ sticky hands, or the jiggling menisci of the red wine in their glasses.

But until now, my problems had always stemmed from being Mom’s opposite. Not her mirror.

“I’ll dig up the baby stuff,” my husband offered, all helpful.

“I’ll do it!” Zelda cried, adding pride to my horror. She was the boisterous, feisty kid I hadn’t been. A warrior, not a worrier.

I looked at the special ballet-slipper napkins on the table that Zelda and I had laid together that morning (“not this side up, Mommy,” she’d sighed and corrected my placement). Would I even have trouble tossing these serviettes streaked with memories?

Lurking inside was the threat that I too was a hoarder, that the disorder of disorder was lodged in my genes, waiting to express itself. Compulsive hoarding is a mental illness that affects a staggering 4 percent of the American population (and think of the ripple effect, of all the spouses, children, siblings and domestic partners that suffer too). Hoarders amass and hold on to things, often unread newspapers, old utensils, sometimes animals. Hoarding is frequently coupled with other conditions: anxiety, severe depression, paranoia, an addiction to shopping. Researchers don’t as yet know exactly why this disease emerges nor what sets it off (it does not always manifest in reaction to deprivation), but many hoarders share characteristics: they have trouble letting go and difficulty making decisions, and they tend to prioritize and find value in things in ways that most of us would deem skewed. Hoarders are often suspicious of other people, and are highly creative perfectionists, who see endless potential, who sense the myriad different functions for each object. (Part of their reluctance to get rid of them.) Compulsive clutterers usually do not have insight about their illness; they are not aware that their relationship to their stuff and surrounds is extreme. Indeed, they often have a system underlying their collection, like my mom’s shelving units for her (ironically) stashes of organizational supplies, or her collection of laundry baskets, all stacked together on the living room sofa.

There’s no blood test to determine whether one is a hoarder; amassing is considered to be the symptom of an illness when the amasser’s daily life, self-care and social relationships are affected or endangered. But many of us share hoarders’ traits. We shop, collect, surround ourselves with objects, and even hang on to ridiculous red denim cut-offs in the hopes that we might one day fit into them again, or they might one day fit into fashion again, or because they remind us of a particularly thin and happy summer past.

Now I heard Zelda laughing, as Billie stumbled into my legs and clutched my knees. Motherhood had caught me by surprise. I hadn’t wanted kids, fearing I’d had no role model for mothering, resentful that I’d never had a carefree childhood myself, that I’d spent my youth suffocated by stuff and had wasted energy trying to clean it up. But parenthood turned out to be gloriously grounding. I’d created the loving family and organized household I’d always craved, with bedtime routines, to-do lists, tidy toy shelves, large windows, open spaces in which my children could play. I hated to imagine the emptiness I’d feel when they left me.

Suddenly I saw how for decades I’d thought of my mother’s junk as a blockade, but perhaps it was a connection. Her stockpiled Fisher-Price miniatures and Raffi LPs were tied with love and hope. My daughter’s craft scraps and old sweatshirts marked her growth, my fortune, reminding me of those newborn months when our bond was basal, solid, the anchor of my existence. I finally understood the desire to hang on to remnants of these good times; who knew when they’d come again?

Jon and Zelda returned, schlepping a mound of stuff -- body pillows, size zero diapers -- which they dropped by the door. “I hope you aren’t starving Emily,” Jon said, pointing at the heaps of food I’d laid out on our teak table.

“Judy ordered only a dozen bagels today -- she was holding back,” he mocked my over-catering. Suddenly I recalled my early years when Mom hosted get-togethers, the very same teak table overflowing with whole schools of smoked fish and flocks of Danish.

I checked the clock, thinking of the baby’s nap, Zelda’s snack. I was hyper-organized, and still, mapping out each moment of two kids’ lives was an administrative feat. If I let Zelda’s room go un-tidied for a day, it was chaos. How hard motherhood must have been for my overwhelmed mom, raised as a refugee, whose mind wasn’t organized to begin with.

I recalled old Sundays where I’d wait all day for Mom to call me, checking my phone, growing resentful even though her withdrawal was due to her depression.

I’d worried so much about how my childhood would affect my parenting, never considering how my parenting affected how I was as a child. Being a mom made me a better daughter.

My toddler climbed into the baby napper. It toppled over. She was way too big. I braced myself for her wail, but instead she babbled “ma-ma.” Our connection is taking on new forms, I thought, glimpsing Zelda sweeping down the table, flinging every crumb. She was so different from me, and so similar.

“I hope your baby likes pink mobiles,” I said to Emily, gesturing at the mound that I’d be passing on.

Then my hand grazed a rattle, soft and smooth. I stashed it in my pocket.