After boycotting "Morning Joe," Donald Trump picks a fight with CNN's "New Day": "They call it the Clinton Network and I believe that" 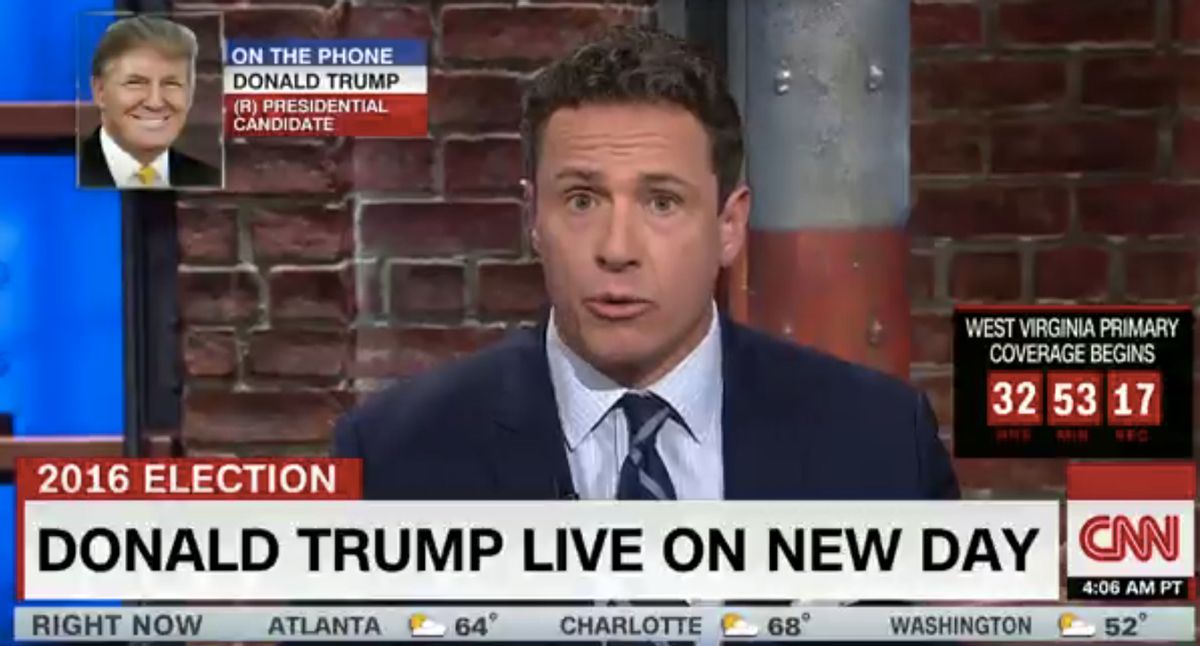 Forget about any presidential pivot for Donald Trump.

Almost a week after vanquishing the last of his 16 Republican rivals to become the presumptive presidential nominee, the thin-skinned candidate is still tweeting insults to cable television hosts and demanding that journalists congratulate him for winning elections before conducting an interview.

On Friday, Trump suddenly turned on his most loyal media sycophant, tweeting that MSNBC host Joe Scarborough actually had little insight -- despite Scarborough predicting Trump's rise to the top of the Republican field almost immediately after the businessman announced his candidacy last June -- after the Republican bloviator said he wouldn't vote for Trump because of his call to ban Muslims from the U.S.

On Monday, Trump kept up his temper tantrum, announcing a new boycott of MSNBC’s “Morning Joe”:

“How you doin’, Donald? It’s very funny when you said you don’t watch the show,” Scarborough said, responding to Trump's tweet live during his show Monday morning. “I think it’s cute. Keep it up. It makes us feel good that you care that much that you tweet about us."

Trump may not have gotten Scarborough's directed message, however, as he was on rival network CNN's morning show, "New Day."

"We need to talk policy," host Chris Cuomo told Trump to start off the interview. Cuomo went on to inform Trump that a CNN commissioned focus group of Independent voters found his attacks on Hillary Clinton's husband's martial infidelity to be "hypocritical" and "distracting."

"Well, that's a nice way to start off the interview," Trump sarcastically shot back. "First of all, you should congratulate me for having won the race," he demanded of Cuomo.

"I thought you know there would be a small congratulations," Trump remarked incredulously. "But I'm not surprised with CNN because that is the way they treat Trump," he said, referring to himself in the third-person.

"They call it the Clinton Network and I believe that."

“Wait. Hold on. Mr. Trump, I did congratulate you the last time we spoke. I said congratulations on winning the big race,” Cuomo responded.

“Thank you very much. So warm and so well-felt,” Trump, again, shot back sarcastically.