Bennifer Watch is out of control: Take it from one who knows — don't root for exes to get back together

The strange allure of the on-again, off-again love fuels gossip, but trust me—let splitting couples be 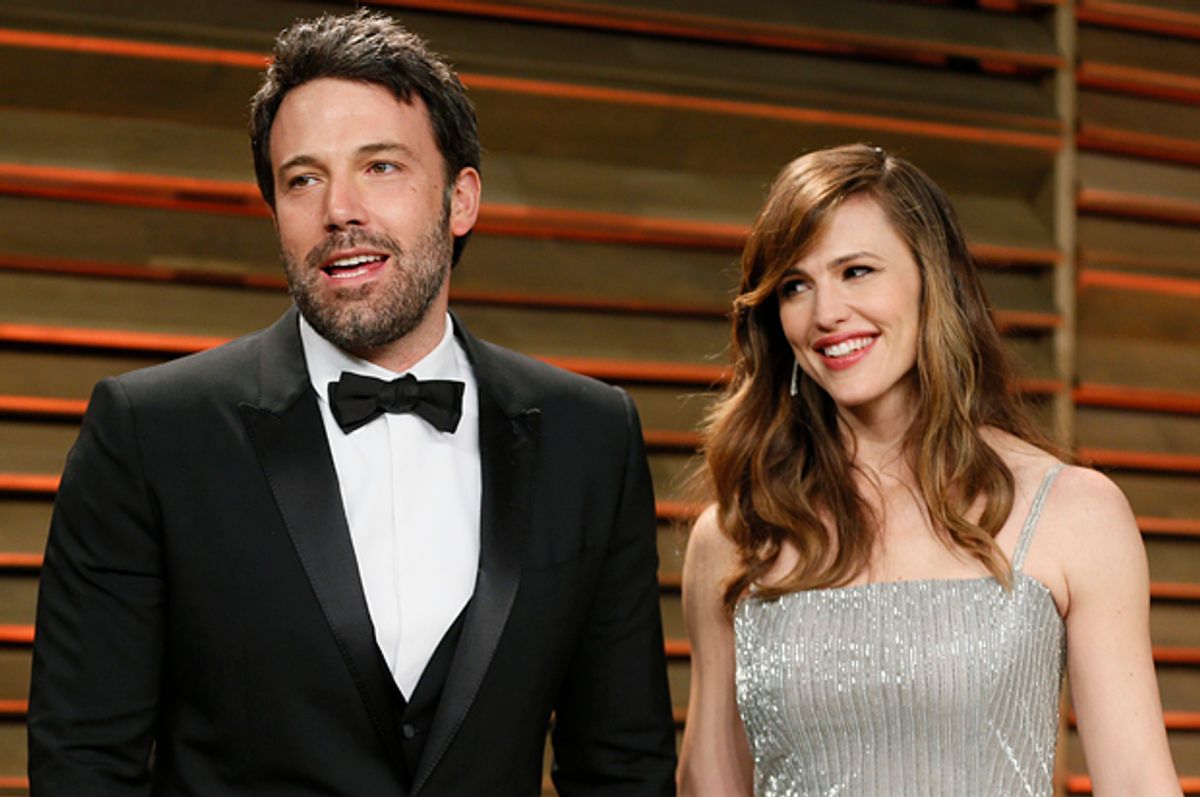 There are few tabloid narratives as enduringly foisted upon on us as the breakup-makeup one. Right up there with the breathless baby bump watch and the dramatic, infidelity-laden triangle, the no doubt tempestuous, on-again, off-again love story holds a strange allure. But how intense, really, is the gravitational pull of an ex? And why would anyone want to make another go of something that's ended? Or to put it in People magazine-speak, are Ben Affleck and Jennifer Garner really canoodling again?

The celebrity couple, who have three young children together, announced they were ending their ten-year marriage last year, amid rumors that Affleck had engaged in an affair with the family nanny. (Affleck called the claim "complete garbage and lies.") This past winter, Garner admitted to Vanity Fair that Affleck was still "the love of my life," calling him, "the most brilliant person in any room, the most charismatic, the most generous. He’s just a complicated guy."

And now, over Mother's Day weekend, the two were in Paris together with their children, showing their family the City of Light. Sources told E! that the vacation was simply about how "They continue to do what's best for the kids," and Us noted that "Garner and Affleck have been spotted together on numerous occasions — including Christmas and Valentine’s Day — and have remained on good terms." But the very idea of two good-looking people who've had sex in the past together again in Paris proved irresistible the more starry-eyed celebrity watchers. People reported that they'd gone out to a restaurant and "At first they were alone and appeared to be affectionate" before they were later joined by their children, adding that despite denials of reconciliation, they still haven't filed their divorce papers.

Elsewhere, meanwhile, also not-officially divorced duo Khloé Kardashian and Lamar Odom's ambiguous status are an ongoing plot point on "Keeping Up with the Kardashians." Kardashian famously stood by her estranged spouse's side after his near fatal incident at a Nevada brothel last fall. On Sunday's episode, the family teased Odom about getting back together with his ex, but Kardashian said firmly that first, "We're definitely getting out of this marriage, because it's been a little tainted." And that's how it's done. Move on first, then figure it out.

Sometimes in love, you just don't really know if the fat lady has truly sung. In 2008, P!nk and Carey Hart announced they were calling it quits — and then didn't. But often, a breakup, especially one in which kids are involved, is merely a Gwyneth and Chris "conscious uncoupling," complete with shared holidays and continued bonding long after the romance itself is over. That is as it quite often should be — and I say this as someone who's something of a poster girl for second go-rounds.

When my spouse and I ended our marriage a few years ago, believe me, I thought that decision was as for keeps as I'd thought the original vows were. Instead, somehow, we fell for each other again and took another shot. I have never for a moment regretted any step of it — the first relationship, the ending of it, the second, more mature new love that followed. What I never never understood, however, was the weird idea that getting back together should ever be the hoped-for outcome of a split. Most of the time, it's not. So please don't automatically root for, or think it's the most romantic thing in the world, to come back from a breakup. As Louis CK wisely says, "No good marriage has ever ended in divorce. It's really that simple."

So if someone — whether it's Jennifer Garner or your next door neighbor — says that her marriage is ending, believe her. Believe that this is for the best. Believe that this is what growth and healing look like. And if two people who once loved each other can find each other again someday on a deeper level, take it as indication they have changed and grown, and be happy for them. But if they can form a friendship and harmonious parenting partnership out of the wreckage of their old marriage, trust that that's enough of a miracle for anybody.