John McCain gives in: The senator's slow, awkward surrender to Trump is likely the first of many on the Republican side 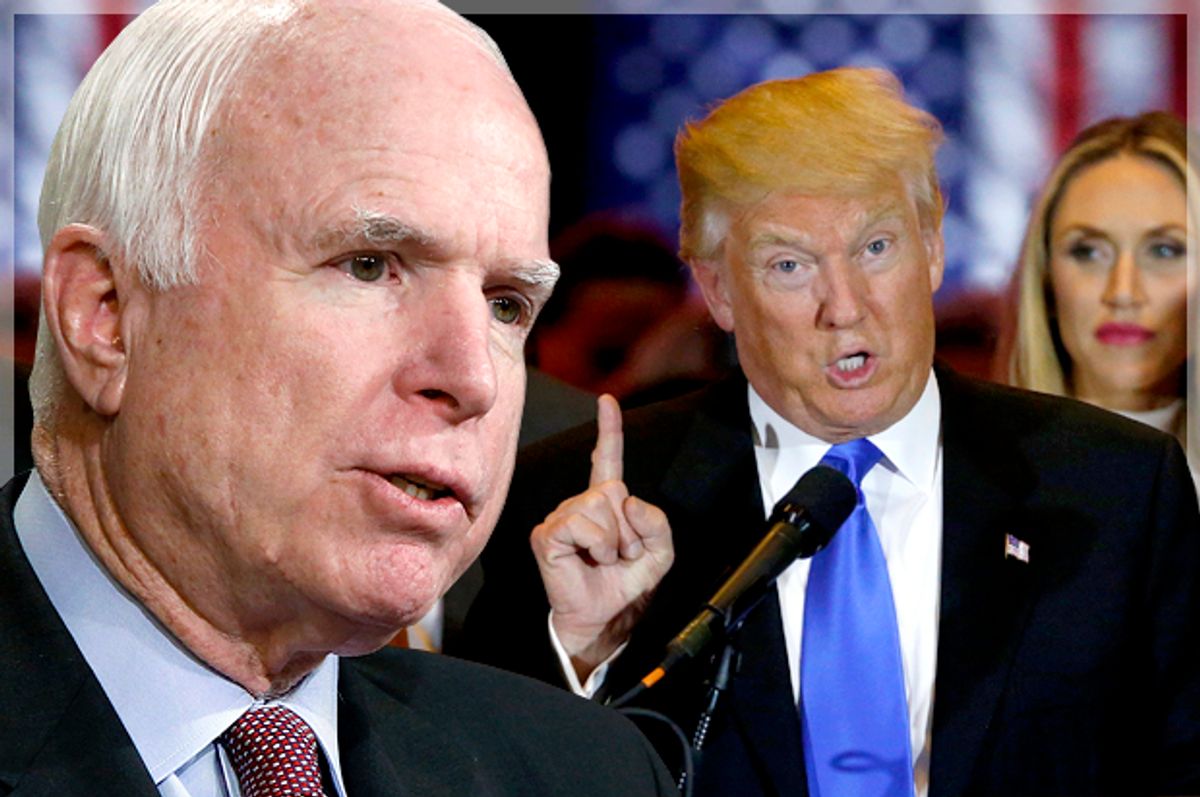 “He's not a war hero. Well, he's a war hero because he was captured. I like people that weren't captured.” - Donald Trump

That was Donald Trump talking about Arizona Sen. John McCain last July in Ames, Iowa. Trump followed these off-the-cuff remarks with a statement in which he refused to apologize, calling McCain “another all talk, no action politician who spends too much time on television and not enough time doing his job.”

The backlash to Trump's comments was fast and furious, especially from the other Republican presidential candidates. “Enough with the slanderous attacks,” Jeb Bush tweeted. “@SenJohnMcCain and all our veterans – particularly POWs have earned out respect and admiration.” “John McCain is an American hero. I have nothing but respect for his service,” wrote Bobby Jindal. Lindsey Graham tweeted, “If there was any doubt that @realDonaldTrump should not be our commander-in-chief, this stupid statement should end all doubt.”

McCain, for his part, stayed quiet about Trump's comments. Like most of the Republican establishment, however, he was opposed to Trump's candidacy.

At the time, a Trump nomination still seemed impossible, or at the very least highly unlikely. It wasn't an act of political courage to denounce the Donald then. Despite what the polls said, none of it felt real. The wheels, everyone assumed, were bound to fall off. But that never happened. Trump carved through the GOP field with remarkable ease, picking off the candidates one by one. Today, he's the presumptive nominee, and party elders have a difficult decision to make: Stick to their principles and refuse to endorse Trump or surrender in the name of political expedience.

No one has more reason to stand their ground against Trump than John McCain. If there's a prominent Republican with the moral and political stature to defy Trump, McCain's an obvious candidate. Although the Arizona senator debased himself in 2008 when he nominated a buffoonish celebrity as his running mate, he's still a respected figure in Washington, a man with enough cachet to resist the political winds.

Sadly, McCain's capitulation is already underway. In an interview with CNN over the weekend, McCain signaled to GOP leaders that it was time to surrender. While he insisted Trump needs to “express his appreciation for veterans,” McCain abandoned any pretense of opposition:

“You have to draw the conclusion that there is some distance, if not a disconnect, between party leaders and members of Congress and the many voters who have selected Donald Trump to be the nominee of the party...You have to listen to people that have chosen the nominee of our Republican Party. I think it would be foolish to ignore them.”

McCain is hiding behind the voters here, but this isn't about the general will; it's about re-election and, to a lesser extent, party loyalty. In that same interview, McCain perfunctorily rebukes Hillary Clinton, claiming a Clinton presidency “would cause the economy to continue to stumble along and put us in the economic malaise that basically we've had for 8 years.” Nonsense. McCain well understands that Trump's proposals are both dangerous and unworkable. What impact a Clinton administration would have on the economy is a legitimate debate, but there's no reason to suppose a Trump administration would be better. In truth, we have no idea what he would actually do. All we know is that he can't do what he says he will. And yet McCain stared into the camera and called Trump a “capable leader.”

McCain's about-face is a sign of what's to come. Trump has all the leverage now. Paul Ryan, arguably the GOP's most credible leader, is among the few to publicly challenge Trump since his presumptive nomination. Trump isn't surrendering, however. On NBC's “Meet the Press,” he suggested that removing Ryan from his post as chairman of the Republican National Convention may be necessary if he doesn't fall in line. This is precisely the stance you'd expect Trump to take - it's worked marvelously for him thus far.

The party will have to conform to Trump's agenda, not the other way around. “I'm going to do what I have to do,” Trump said on ABC's “This Week.” “I have millions of people that voted for me. So I have to stay true to my principles also. And I'm a conservative, but don't forget, this is called the Republican Party. It's not called the Conservative Party.”

More accurately, it's Trump's party. McCain knows it, which is why he's fumbling his way into backing Trump, who won his home state of Arizona by 33 points. Ryan, too, will come around eventually. If he doesn't, it's because he's given up on 2016 and is positioning himself for 2020. For everyone else, though, the choice will be to hop on board the Trump train or risk alienating his coalition of voters. McCain's pathetic flip-flop is likely an indication of how Republicans running for office will handle the Trump dilemma: Self-preservation, not integrity, is the guiding light.