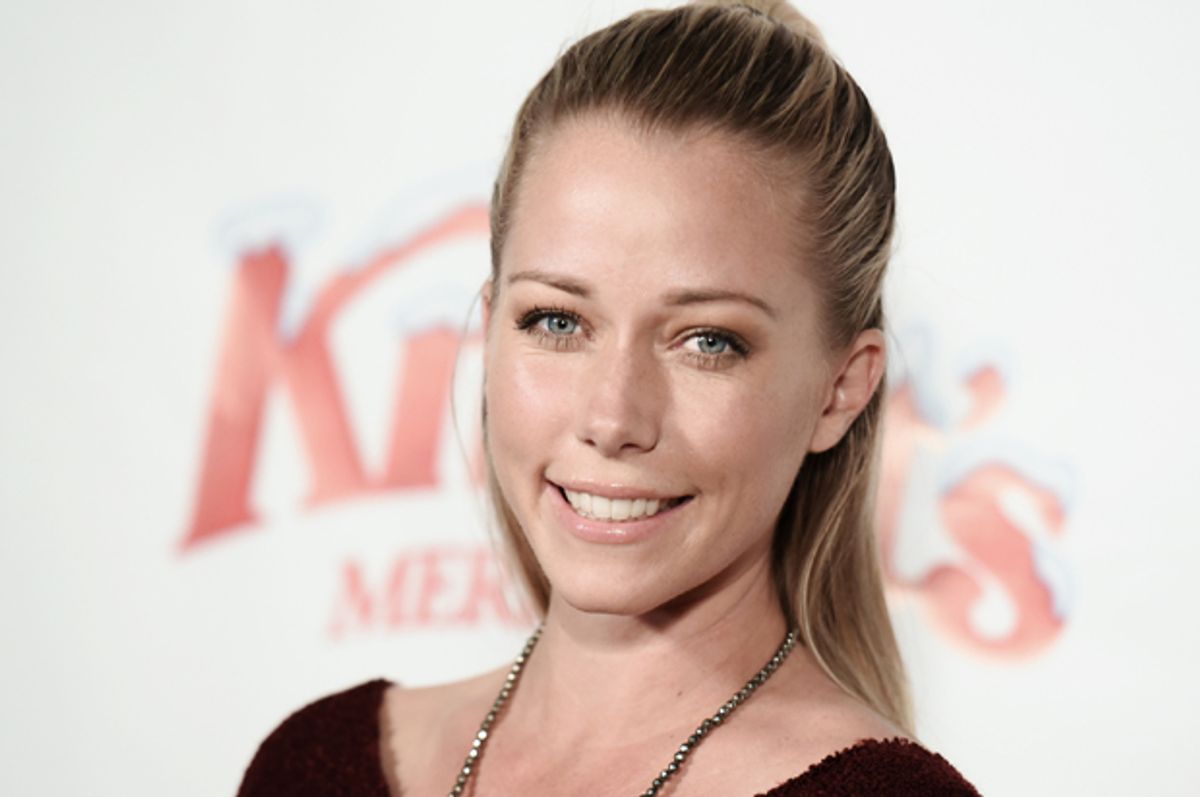 The cycles of an adult female celebrity's life are very clear — she is to be, for the duration of her childbearing years, sporting a possible baby bump, in an advanced state of pregnancy and naked on a magazine cover, or immediately post-partum, bikini-clad and hot hot hot. The most important thing, at all times and regardless of where she currently is on the reproductive spectrum, is that she always appear totally taut and bangable. So let us praise now Kendra Wilkinson-Baskett, who took to Instagram on Mother's Day to flaunt her abs — her un-retouched, stretch-marked, pushed around baby two babies abs. Oh, hell yes.

Smiling, wearing a very practical and not Victoria's Secret-ish sports bra, and shot from below, Wilkinson-Baskett shared an image of what motherhood really looks like for a lot of women, along with the caption, "Look what my 2 babies did... They made me happy. #happymothersday." The skin is loose and lined. There is no six pack. It's pretty damn awesome. Her post is currently closing in on one hundred thousand likes and has garnered loads of supportive comments, like the one from the woman who admits, "I love how honest & real this is. I have a ton of stretch marks & always feel bad when comparing myself to others."

Look what my 2 babies did... They made me happy. 😊 #happymothersday

Sure, some women go through the rigors of pregnancy — even multiple pregnancies — and then go right back to their lives as underwear models. Some women — like notorious "Fit Mom" Maria Kang — insist that even busy moms have no "excuse" for not being in top shape. And based on the eagerness of magazines to put hot moms on their covers — with a boast of how many pounds lost and in how few weeks — you might think that that's the norm. But for many women, that landscape is just never quite the same as it was before it grew people in it. Stretch marks appear. Breasts lose some of their girlish perkiness. And as a hilarious new campaign from HelloFlo will tell it to you straight — the bladder may find itself at the mercy of unexpected sneezes. Sorry. Sometimes that's just the price of the ticket.

Yet even the 30 year-old former Playmate and star of "The Girls Next Door" and "Kendra On Top" has previously participated in the aspirational mom body story. Back in 2009, she appeared "seven months along and loving it" on the cover of In Touch in a bikini, fielding questions about how "excited" her NFL star husband Hank Baskett must be about all her new booty. By February of 2010, she was on the cover of OK!, bikini clad and clutching her new baby, bragging "How I lost 25 pounds in 8 weeks." And by that fall, she was back on the cover of In Touch, talking about getting ready for her second child. By then, she may have been humbly talking about "stretch marks and saggy boobs," but was also still holding her son Hank Jr. while wearing a bikini and talking about how much weight she'd lost. But maybe there's something about the the birth of daughter Alijah that's changed her. Shortly after her daughter's arrival in 2014,  Wilkinson admitted, "I used to weigh 109 pounds, but after kids that’s just unrealistic. Now 120 pounds is perfect for my new shape. I’m still 15 pounds away from that."

As an Instagram photo from last week with the simple caption "boobs" will attest, Kendra's still plenty hot. A little slack in the midsection won't change that. But with her very real view of what a stomach can look like after childbirth, a woman who's spent much of her adult exposed is revealing something new. That we can measure a body's achievements not just in pounds lost or muscles gained, but in scars and droops. As one fan told Wilkinson on Instagram, "You earned your stripes."