Instead of talking about taxes like a normal human candidate, Trump falls down a hole of total incoherence 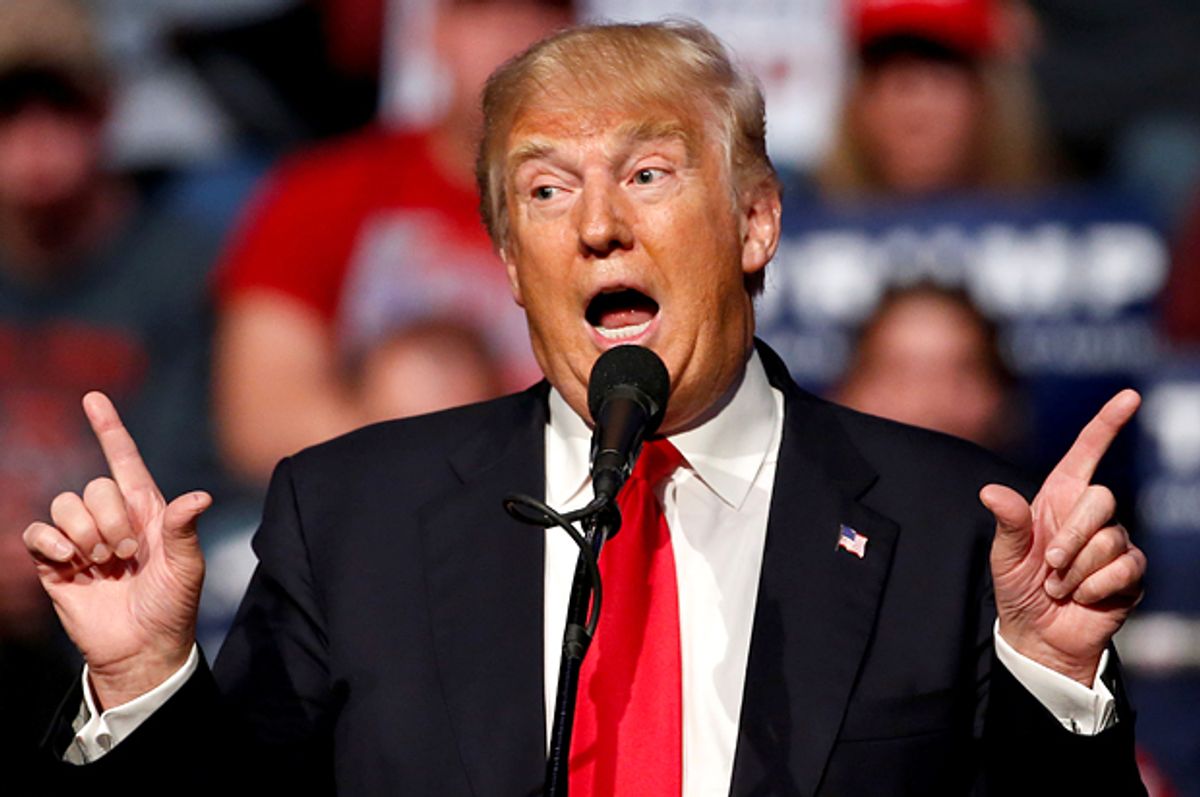 Does Donald Trump want to raise taxes on rich people? The answer to this question is shifting and variable, and made all the more confusing by the fact that the Republicans’ presumptive presidential nominee gives deceptive answers while insisting at the same time that his tax plan – one of the few specific policy proposals he’s put forth – will not survive contact with Congress.

It’s damn near impossible to keep track of where Trump stands, given that most of what he says about policy is impossibly vague or indecipherable nonsense, but we can tease out some broader themes and track how they’ve abruptly shifted over time. Last summer, Trump set the tone for his “populist” campaign by taking a stand against “hedge fund guys” who “get away with murder” through the tax code. Asked if he was ready to raise taxes on himself, Trump said yes. “I'm OK with it. You've seen my statements, I do very well, I don't mind paying some taxes. The middle class is getting clobbered in this country.”

Then came Trump’s tax plan, which turned out to be an almost impossibly large giveaway to the wealthiest strata of Americans. “The largest benefits, in dollar and percentage terms, would go to the highest-income households,” the Tax Policy Center wrote of Trump’s plan, which would also gouge open a $9.5 trillion hole in the budget. The Trump plan does target the “hedge fund guys” by closing the carried interest loophole, but the increase they’d have to pay would be minimal given the huge rate cuts he calls for, and it would be more than offset by cuts elsewhere. So all that business from Trump about the shenanigans of the hedge funders and the increased tax bill for rich folks like him was, in a word, bullshit.

But whenever it was convenient for Trump to sound a “populist” note, he’d drop indications that – contrary to what the plan on his website lays out – he was ready to hike taxes on rich people. “Do you believe in raising taxes on the wealthy?” Trump was asked at a NBC town hall last month. “I do, I do – including myself. I do,” he said. And, just last week, after he had locked up the nomination, Trump began making noises about changing his position on tax cuts for rich people. “I am not necessarily a huge fan of that,” he told CNBC. Over the weekend he seemed talked about rich people like himself paying more in taxes. “I am willing to pay more,” Trump said on ABC. “And you know what? Wealthy are willing to pay more. We’ve had a very good run.”

Well, it turns out he was just using confusing language – Trump insists that when he says the rich should “pay more,” he means “more” in relation to how much they would pay if his proposed tax scheme suddenly became law. Right now Trump’s plan calls for calls for the top rate to be cut from 39.6 percent to 25 percent. When Trump says the rich could “pay more,” he means more than 25 percent. “If I increase it on the wealthy, that means they’re still going to be paying less than they’re paying now. I’m not increasing it from [the current rate], I’m talking about increasing from my tax proposal,” Trump said on CNN. He could, of course, talk about this like a normal human being and say something like “I would agree to a smaller tax cut for the wealthy,” but instead he goes the circuitous and deliberately unclear route of describing an “increase” relative to a theoretical decrease.

If you don’t follow it, that’s because Trump doesn’t want you to. The policy argument here isn’t being fought on solid ground – Trump just changes what his overall philosophy is whenever the circumstances warrant. He says the wealthy should pay more, but his tax plan leaves them paying far less, and when he says “more” he doesn’t really mean “more” in the sense that most people understand the term.

The way Trump squirms out of all this contradictory nonsense is by insisting that the plan he’s put forth is merely a starting point for a negotiation with Congress. “I'm not under the illusion that that's going to pass,” he said on “Meet the Press” on Sunday. Seems like a bad negotiating tactic to admit ahead of time that the proposal you’ve put forth is unrealistic and will never see the light of day, but then again I don’t have the business savvy required to bankrupt a casino.