It sounds crazy that a man as lacking in piety as Donald Trump could win over religious voters. But he has 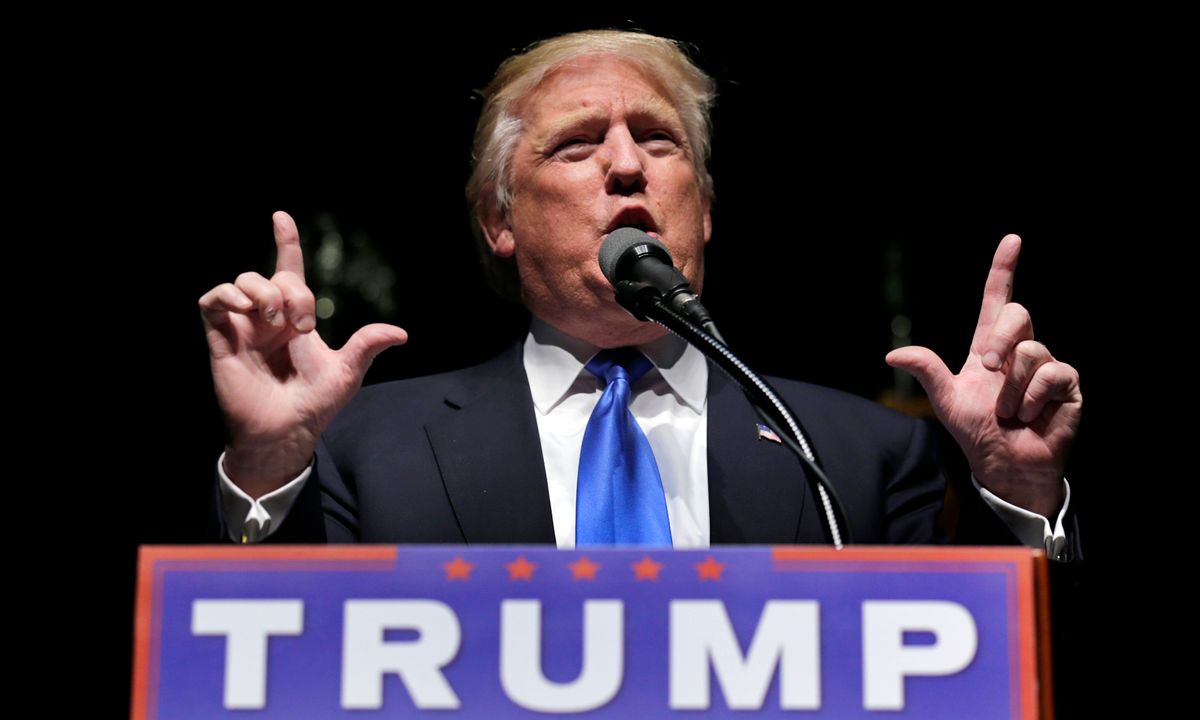 FILE - In this Friday, April 15, 2016, file photo, Republican presidential candidate Donald Trump speaks during a campaign event in Hartford, Conn. In the event that the U.S. economy crashed, Trump has floated a recovery plan based on his own experience with corporate bankruptcy: Pay Americas creditors less than full value on the U.S. Treasurys they hold. Experts see it as a reckless idea that would send interest rates soaring, slow economic growth and undermine confidence in the worlds most trusted financial asset. (AP Photo/) (AP/Charles Krupa, File)
--

One of the fascinating ongoing sideshows of the Conservative Crack-up is the deep schism Trump has revealed within the Christian Right. It's just one of many sub-stories in this outrageous campaign, but since so-called conservative "values voters" have been such major players in GOP politics and American political life in general for decades now, it's an important one.

Although there have been rumblings of discontent over the past few years, as younger evangelicals with more tolerant views began to infiltrate the movement, the embrace of Trump by millions of evangelical Christians is a development very few people saw coming.

(I certainly didn't when I wrote this piece last year about the history and impending break-up of the conservative coalition between Catholics and Protestants; I ended it by saying the evangelical right was solid as a rock. Chalk that one up to yet another pundit fail.)

The current split among the evangelical right started to become obvious when Donald Trump was feted as an exalted visiting dignitary by Moral Majority founder Jerry Falwell's Liberty University. It turned out that he had visited before, and had been making gestures of friendship for some years. Indeed, Jerry Falwell Jr. is a big fan, who says that Trump reminds him of his own father.

It became clear that this wasn't an anomaly when Trump's electoral success among this cohort derailed Ted Cruz's southern strategy, with which he had hoped to corner the Christian Right and therefore take the delegate lead long before the campaign got to more godless environs. That didn't work out, obviously, and Cruz along with everyone else was surprised by the willingness of so many people who call themselves conservative Christians to vote for man who is anything but pious and repeatedly shows that he is religiously illiterate. As it turned out a lot of those people aren't actually all that religious themselves:

[E]vangelicals do boast higher worship attendance numbers than other faith communities, and those who do go to church regularly tend to vote and behave in ways that match the greater evangelical agenda. But that doesn’t mean they all sit in the pews every Sunday, nor does it mean they blindly accept whatever their pastor tells them: anywhere from 35 to 40 percent of evangelicals attend church occasionally, seldom, or never. You’re less likely to see this more wayward subset of evangelicalism singing hymns on Sunday morning, but they’re happy to identify as evangelicals on opinion polls anyway, and have often been the group lifted up by progressives as examples of evangelical “hypocrisy.”

As it turns out, these biblically “prodigal” evangelicals are the heart of religious support for the equally prodigal Trump: According to the Wall Street Journal, only 38 percent of Trump supporters attend worship weekly or more, compared to 56 percent of social conservative voters and 43 percent of Republican establishment voters.

For all of his advanced voter models and analysis, it appears that Cruz didn't delve deeply enough into the actual beliefs of the evangelical voter to see that many of them hold "moral values" much closer to Trump's than to his own. Those biblically "prodigal" evangelicals tend to be divorced at higher rates than even the godless atheists, have higher incidents of premarital sex and sexually transmitted diseases and are more likely to be involved in domestic violence.  Indeed, rather than being devoted to Jesus, at the moment their evangelical fervor seems to be directed at Donald Trump.

It was reported earlier that some evangelical preachers of the "prosperity gospel" are all in with the Trump campaign, which is hardly surprising. He is nothing if not conspicuously prosperous. But as Peter Montgomery of Right Wing Watch reports, they aren't the only ones:

What is a bit more surprising is the support Trump is getting from a leading advocate of Seven Mountains dominionism, which teaches that government and other spheres of influence — “mountains” like media, entertainment, business — are meant to be run by the right kind of Christians. Lance Wallnau is an influential leader in the Seven Mountains movement. In 2011, he declared that it is the obligation of Christians to “seize those high places” in order to bring about the return of Jesus Christ — something he has said they should do by both “overt” and “covert” means. In 2012, he said that the mountains of government, media, and economics were currently occupied by Satan.

“When God wants to move in history, he doesn’t always pick the favorite evangelical,” said Wallnau. He said that God brought Abraham Lincoln and Winston Churchill to power at crucial moments in history, the way He is now raising up Trump for our time. And he knows this, Wallnau said, because God told him so. Wallnau said God told him specifically that Trump is “a wrecking ball to the spirit of political correctness.”

It's not just the people at his rallies Trumps is bring to ecstatic states of near-worship.

But, needless to say, at least some members of the Christian Right are not amused, most famously the Southern Baptist convention's Russell Moore, who has written several scathing op-eds criticizing Republicans for backing Donald Trump. And just as it has happened among the other factions of the GOP coalition, this conflict has broken out into open warfare. Moore appeared on "Face the Nation" on Sunday and let fly:

"One of the key aspects of conservativism is to say, character matters in public office and in the citizenry and virtue has an important role to play in our culture and in our politics...And so when you have conservatives who were saying in the previous Clinton era that character matters, rightly so, who now are not willing to say anything when we have this sort of reality television moral sewage coming through all over our culture and conservative who previously said we have too much awful cultural rot on television, who now want to put it on C-SPAN for the next four years and to give a model to our children really with either of these two candidates of an amoral sort of vision of America that isn't what we believe in."

In fairness, Moore also called Hillary Clinton decadent just to be even-handed, although I don't know that she's called anyone a "pussy" on the stump or discussed her genitalia in a debate. Maybe I missed it. Needless to say, Trump was angry, and he fired back on Twitter with this:

It went back and forth, with Moore hurling Bible verses at Trump and Trump undoubtedly ordering an intern to look up what they meant. But it isn't just Moore. As Think Progress reported yesterday, there are a few other Christian Right leaders registering concern:

In February, the Christian Post — an evangelical publication — took a position on a candidate for the first time in their history by publishing an impassioned take-down of Trump. And last week, at least one Liberty University board member resigned in protest after the school’s president endorsed Trump.

The Washington Post recently featured a story about some heartland evangelicals who are upset by the Trump victory in the Republican primary. One pastor from Nebraska named Gary Fuller poignantly put it this way:

“In a sense, we feel abandoned by our party. There’s nobody left.”

It wasn't very long ago that we were seeing magazine cover stories about preachers and other Christian leaders' outsized influence on American politics, with titles such as "Thunder on the Right" and "The Right Hand of God." They were political powerhouses as much as religious leaders going back to the earliest iteration of the Christian Right, the Moral Majority. They didn't just have tremendous influence but literal veto power within the Republican party. Now, with a few notable exceptions, most of them are either signing on to the ugly, proto-fascist Trump movement or sitting quietly in the back of the bus, saying little as the Republican Party bows its head to an amoral man on a white horse. For these men of God, it practically begs the question: What would Jesus do?