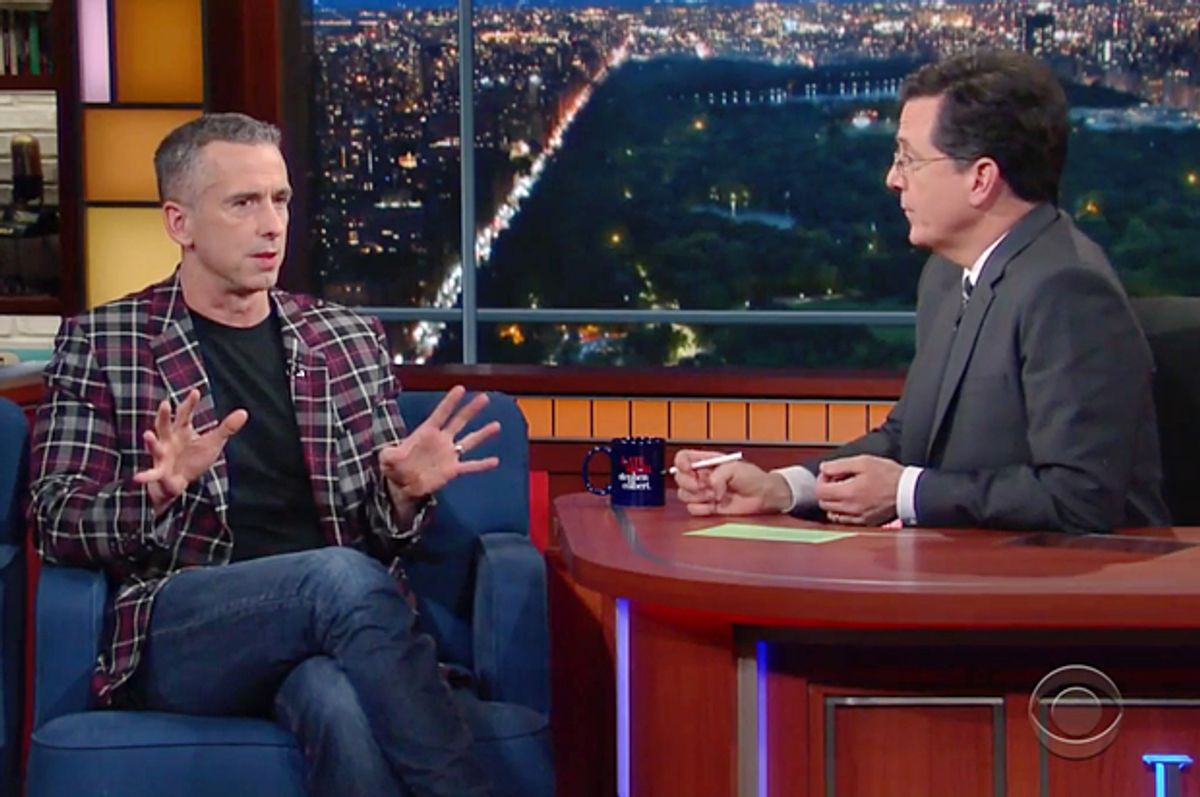 Dan Savage on "The Late Show with Stephen Colbert" (CBS)
--

Last night on “The Late Show With Stephen Colbert,” after a long interview with Kaley Cuoco of “The Big Bang Theory” and a cold open with Senator Bernie Sanders, host Stephen Colbert invited on sex columnist and activist Dan Savage. Ostensibly, Savage was on the show to discuss 25 years of his column “Savage Love.” But in the current climate of “The Late Show,” Savage’s presence appeared to be there to say some things that Colbert couldn’t or wouldn’t, specifically about North Carolina’s now-infamous discrimination law against its transgender citizens.

Colbert hasn’t been silent about the issue, but as he said, half-sincerely, back in April:

I believe it is not my job to deny you my talents. I believe it is possible to use the magic of television to bridge our differences. I mean, for Pete’s sake, even after the Civil War, great figures like Abraham Lincoln and Robert E. Lee believed this country could come together. That’s why I will never withhold this show from anyone.

Of course, while he was saying these words, two men in the costumes of Lincoln and Lee first gravely shook hands and then passionately made out, with a kind of no-holds-barred enthusiasm that might only be matched, on broadcast, by the gay characters in Shonda Rhimes’ shows.

But the parody doesn’t quite undercut the message. Colbert can make jokes about his own bathroom bills, as he did just a few weeks ago, or depict Lincoln and Lee engaged in a tragic romance, but he’s also not going to demonize parts of the viewing audience for their beliefs, especially if those beliefs are tied to one of America’s two major national parties. This Stephen Colbert, which may be closer to the real-life Stephen Colbert, is not about skewering, but about conversation.

Which is, by and large, admirable; in an increasingly polarized country, the only way to reach the most entrenched segments of our population is through understanding, not vilification. But in the case of North Carolina House Bill 2, Colbert is caught between the idealism of conversation and the reality of a group of lawmakers that cravenly calculated to deny a marginalized group of people even more rights—and effectively struck down statewide anti-discrimination laws, in the process. The Republican party does not always make it easy to believe in dialogue.

For Colbert’s now-mainstream audience, Savage’s presence on “The Late Show” functioned as a kind of bootcamp in queer politics. In that sense, Savage is essentially perfect for the job—though he’s criticized within the queer community for his racial, class, and gender privilege getting in the way of his politics, he has become the perfect ambassador of the exceedingly unthreatening existence of out gay people. As he told Colbert last night, he’s been married for 21 years; his “Savage Lovecast” is one of the most popular podcasts in the world. He was there to talk about how queer people are just like the rest of us, and for the most part, that’s what he did: citing Neil Patrick Harris, Ellen DeGeneres, and Laverne Cox. For “The Colbert Report”’s audience, this would have been a too-simple investigation of the queer experience in America.

But in the new Stephen Colbert’s fledgling “The Late Show,” any hint of liberal demagoguery is a great one. The live studio audience was absolutely loving it. Savage is part of the establishment now, but he became popular with his trenchant attacks on mainstream homophobia. In 2011, he famously told Bill Maher on “Real Time” that he wished Republicans would “fucking die,” a statement he’s had trouble walking back (because where do you walk that back, really). And last night, he expressed healthy skepticism of Caitlyn Jenner as a trans role model, pointing to the fact that up until quite recently, she was planning to vote for Ted Cruz. When Savage said that electing Donald Trump would not just bad for queer voters, but “bad for all Americans,” the audience practically whooped.

To my mind, this is another installment of Colbert’s genuine quandary over the past year—caught between the liberal warrior we know he can be and the mainstream host he’s trying to be. I believe that Colbert wants to create conversation. But I'm skeptical that even Colbert could have a productive conversation with this Trump-supporting, Muslim-banning, trans-terrified Republican party.