Will they ever learn? North Carolina lawsuit shows why the religious right was downright stupid to pick on trans people

After losing the same-sex marriage battle, the right decides to make the same mistake by attacking trans people 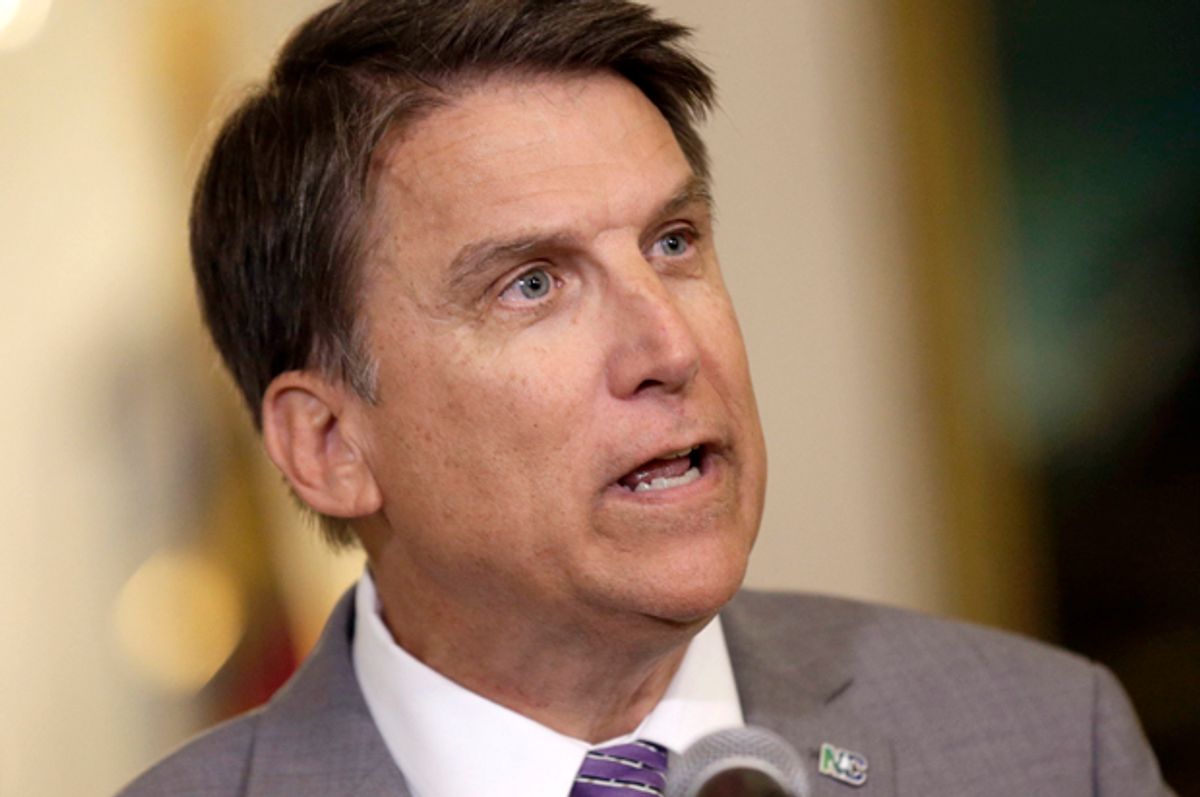 North Carolina Gov. Pat McCrory is bound and determined to go into the history books as a villain.

After the Department of Justice sent McCrory a letter last week, warning him that North Carolina's new law that bans transgender people from using public bathrooms that correspond with their gender, there were a lot of options, ranging from accepting that you can't just violate federal anti-discrimination laws to begging for more time to waiting for the lawsuit and battling it out in court.

Instead, McCrory escalated, rushing to sue the federal government first, making it impossible for the DOJ to do anything but make good on their original threat to sue, which they did the second the initial deadline given to North Carolina passed. Now North Carolina, which had already dug itself into a huge hole by passing this stupid bill in the first place, has dug itself even deeper.

The whole thing is a microcosm of the larger stupidity the religious right has shown in picking this battle in the first place. And make no mistake: It was right wingers who picked this fight. Trans people were already facing plenty of stigma and discrimination before, to be clear. Still, this is the right deliberately choosing to escalate the issue, by turning what was not really something most people thought much about — trans people in the bathroom — into a nationwide hysteria.

It's extremely obvious what's going on here. Ever since last summer, when the Supreme Court legalized same-sex marriage in all 50 states, the Christian right has become a bit unmoored. They had lost not just the legal battle over their signature issue, but also in the court of public opinion. The majority of Americans now support same-sex marriage. Just as importantly, the normalization of it has made it hard for the religious right to keep at their armageddon-style rhetoric on the issue, as more Americans realize that the world really won't fall to pieces because the nice gay couple down the street is married instead of just cohabiting.

On top of that, it just seems like they are losing their power in the popular discourse generally. The Republican party is on track to nominate a man who can barely feign interest in their issues. A significant chunk of self-proclaimed evangelicals voted for Donald Trump, thereby embarrassing the religious right by revealing that many of their supposed loyalists are people who don't actually darken the church door very much.

Even on the abortion issue, the religious right is failing.Forty years of hysteria over abortion hasn't moved the needle of public opinion on the issue, and the main reason the abortion rate has declined is contraception use is up. They have been effective at curtailing abortion rights in many states, but even then, they have to use subterfuge and lies, because the public straight up does not agree with their point of view on this issue.

Under the circumstances, it's no surprise that Christian conservatives have been flailing around, looking for a new signature issue to latch onto in order to make themselves seem relevant again. And thus, they landed on trans people and stoking hysteria about the supposed threat to the country's moral fiber if we let trans people pee in peace.

Picking on trans people is immoral, of course, but it's also stupid and there's reason to believe the right will rue the day they decided to turn what was previously uncontroversial — letting people use the bathroom in peace — into their next big battle. It's clear the right learned nothing from the same-sex marriage fight, because they are making exactly the same mistakes they did then.

It's easy to see why the right thinks picking on trans people will give them an easy win: Trans people are a tiny minority, making it hard for them to fight back. Demagoguing on issues around sexuality and gender is easy, because these issues strike close to home and make it hard for people to be rational about these things. Most people are unfamiliar with the struggles of trans people, which is an opportunity for right-wingers to demonize. Early polling suggested that this was a winning issue, as a plurality of voters supported banning trans people from bathrooms.

But it is worth remembering that all this was true of the same-sex marriage issue: Most people opposed it, most people were ignorant about the issue, it was easy for conservatives to stoke disgust for gay people because they were unfamiliar to the majority of Americans.

But what we learned from the same-sex marriage battle is that while it's not easy to overcome these obstacles, it is possible. More importantly, there's a straightforward roadmap to overcoming people's fear-based objections: Education, education, education. Which is oh-so-coincidentally easier to do pull off when the issue is in the headlines, giving activists more opportunities to educate the public.

With same-sex marriage, it boiled down to convincing straight people that gay people are just like them. It sounds trite, but it's true, and most importantly, it worked. Once straight people realized that same-sex marriages are basically the same deal, from date night to squabbles over laundry, it became increasingly hard to justify meddling with other people's private business.

There's reason to believe that the trans bathroom issue will go exactly the same way.  The Christian right will be able to stir up a temporary hysteria by plucking at people's "ew, weird" strings. But the longer the issue stays in the headlines, the more trans people will be in the public eye, and they will seem increasingly normal and non-threatening to people.

Indeed, the right has already started to concede on this issue a bit, denying that they are banning trans people to ban trans people, but instead concocting easy-to-debunk urban legends about cis men pretending to be trans to get into women's rooms. This, too, has created a stir, reaching past people's rational centers and pushing their buttons, but it's quickly becoming apparent that the right doesn't actually have any examples of this happening.

In the end, just as with the same-sex marriage issue, the right is going to come up against the problem of why the public should care. It's easy to demonstrate why denying someone their right to marry hurts them, but impossible to argue that letting them marry hurts anyone else. There's a similar issue going on with trans people, who are in real danger of being humiliated, harassed, or terrorized. Meanwhile, it's hard to imagine what harm is done to a cis woman who has to pee in a stall next to a trans woman peeing in her own stall.

There's already evidence that these factors are coming into play. New polling data shows that nearly 6 in 10 Americans oppose laws forcing trans people to use the wrong bathroom. That's after less than a year of LGBT activists doing hard work educating the public on why it's  so critical to leave people alone to pee in peace. But it's just so incredibly hard to come up with good reasons to meddle with other people's right to pee in peace that we can expect this polling data to improve the longer this issue drags out. Which will be awhile now that North Carolina and the DOJ are suing each other.

The end game here is that the religious right reminds the public that they are a bunch of creepy and possibly perverted people who can't stop worrying about what someone else has going on in their pants, even though it's none of their business. Not really the best look for a movement trying to find some relevance in the modern world.