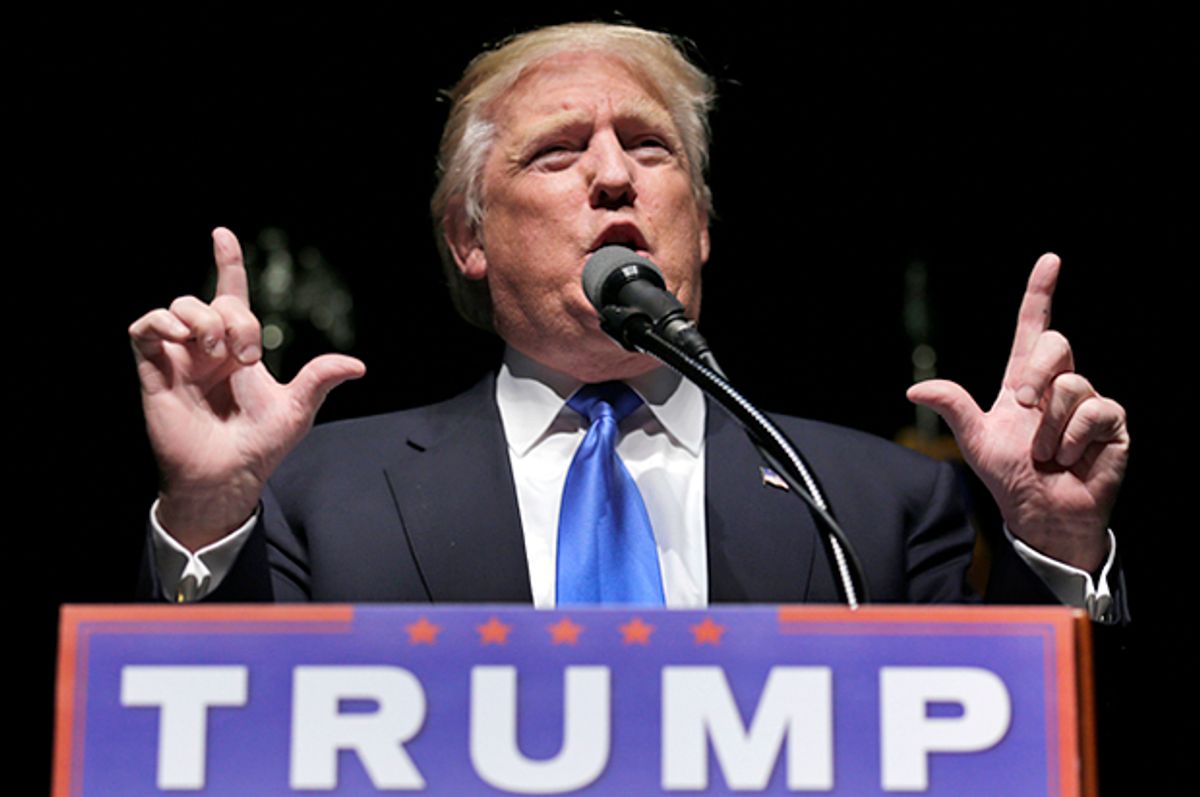 Is an “October surprise” that could put Donald Trump in the White House already baked into the American electorate? That’s the frightening question one could derive from this week’s column by Thomas B. Edsall, one of the most useful (and least ideologically hypnotized) contributors to the New York Times. We can’t be sure how many people really support Trump, Edsall reports, since there’s considerable evidence that they aren’t telling pollsters the truth. Voting for Trump, it appears, is something white people do in the shadows. It’s a forbidden desire that is both liberating and self-destructive, not unlike the married heterosexual who has a same-sex lover on the down-low, or the executive who powers through the day on crystal meth and OxyContin. On some level you know the whole thing can’t end well, but boy does it feel good right now.

I have argued on multiple occasions that white Americans, considered in the aggregate, exhibit signs of an unconscious or semi-conscious death wish. I mean that both in the Freudian sense of a longing for release that is both erotic and self-destructive — the intermingling of Eros and Thanatos — and in a more straightforward sense. Consider the prevalence of guns in American society, the epidemic rates of suicide and obesity (which might be called slow-motion suicide) among low-income whites, the widespread willingness to ignore or deny climate science and the deeply rooted tendency of the white working class to vote against its own interests and empower those who have impoverished it. What other term can encompass all that?

Trump is the living embodiment of that contradictory desire for redemption and destruction. His incoherent speeches wander back and forth between those two poles, from infantile fantasies about forcing Mexico to build an $8 billion wall and rampant anti-Muslim paranoia to unfocused panegyrics about how “great” we will be one day and how much we will “win.” In his abundant vigor and ebullience and cloddish, mean-spirited good humor, Trump may seem like the opposite of the death wish. (He would certainly be insulted by any such suggestion. Wrong! Bad!) But everything he promises is impossible, and his supporters are not quite dumb enough not to see that. He’s a death’s-head jester cackling on the edge of the void, the clownish host of one last celebration of America’s bombast, bigotry and spectacular ignorance. No wonder his voters are reluctant to ‘fess up.

Normal public-opinion polls conducted by telephone, Edsall writes, have consistently shown Hillary Clinton well ahead of Trump in head-to-head trial runs, by a recent average of about nine percentage points. But online surveys compiled by YouGov and Morning Consult tell a different story, showing Clinton ahead by much smaller margins. The most recent YouGov/Economist poll of registered voters, for example, shows Clinton leading Trump by just three points (43 percent to 40 percent), well within the margin of error. Edsall quotes Kyle A. Dropp, who runs polling and data for Morning Consult, estimating that throughout the primary season Trump has gained a consistent advantage of eight or nine points in online polls versus old-fashioned telephone surveys.

In fairness, we don’t know which numbers come closer to the truth. There are valid reasons why many political scientists and statistics wonks believe telephone polling is more accurate in predicting actual voting, and Edsall doesn’t discuss those. But as he puts it, “an online survey, whatever other flaws it might have, resembles an anonymous voting booth far more than what you tell a pollster does.” Your computer won’t raise its eyebrows in microscopic disdain when you click the box for Trump; it won’t tell its friends after work about this person it met today who seemed normal but turned out to be a raging bigot. And the idea that “social desirability bias” — in English, the desire not to seem intolerant or unenlightened in someone else's eyes — can distort poll results has a long history that may give the Clinton campaign some sleepless nights.

Social desirability bias, in its Trumpian context, is closely related to the “Bradley effect,” a polling problem frequently observed in elections where one candidate is white and the other isn’t. That name goes back to my youth and the California gubernatorial election of 1982, when Tom Bradley, the African-American mayor of Los Angeles, led in the polls throughout the campaign but wound up losing to Republican George Deukmejian. A significant subset of white voters (so the theory holds) told pollsters they were planning to vote for Bradley, but didn’t. Either they lied about their true intentions because they didn’t want to sound like racists in the supposedly liberal context of ‘80s California or they discovered, in the privacy of the voting booth, that they couldn’t pull the lever for a black man.

We don’t have that scenario to contend with this year, obviously, and many social scientists believe the Bradley effect has faded: Barack Obama’s actual support among white voters, during his two election campaigns, was pretty close to his poll numbers. Hillary Clinton’s likely status as the first female major-party nominee will clearly be an X factor in this year’s fall campaign, a positive for some voters and a negative for others. But the Trump-specific version of social desirability bias is different from those things in a subtle but powerful way: Voting for Trump can be understood as embracing something rather than rejecting it, even if that something is viewed as insane or repulsive by polite society. Turning your back on a candidate because he’s black is a negative, private act that’s likely to make you feel bad about yourself; embracing the jingoism and misogyny and small-mindedness of the Trump campaign is joining a movement.

It’s transparently unfair to compare Trump to Adolf Hitler (even though I’ve already done it), and it isn’t likely, in the context of the 21st century, that a Trump administration would actually resemble the Third Reich or provoke World War III. But here’s how they’re similar: Hitler cloaked the death wish in positive terms too. Nazism rolled the most noxious elements of German nationalism and European anti-Semitism into a package that seemed affirmative and optimistic, to a nation struggling with economic difficulty and an internal identity crisis. Trump has tried to do the same with his toxic package of racism, sexism and xenophobia, his thoroughly imaginary version of America built from white people’s despair and paranoia and self-loathing. We have underestimated its allure all along, and we still don’t know how deep it goes. Mainstream pundits and politicians in 1930s Germany made a similar mistake.