Beyoncé, Radiohead and FOMO: How sustainable is the era of the "insta-release?"

Music fans now have to whiplash from one blockbuster album drop to the next—is there a better way to listen? 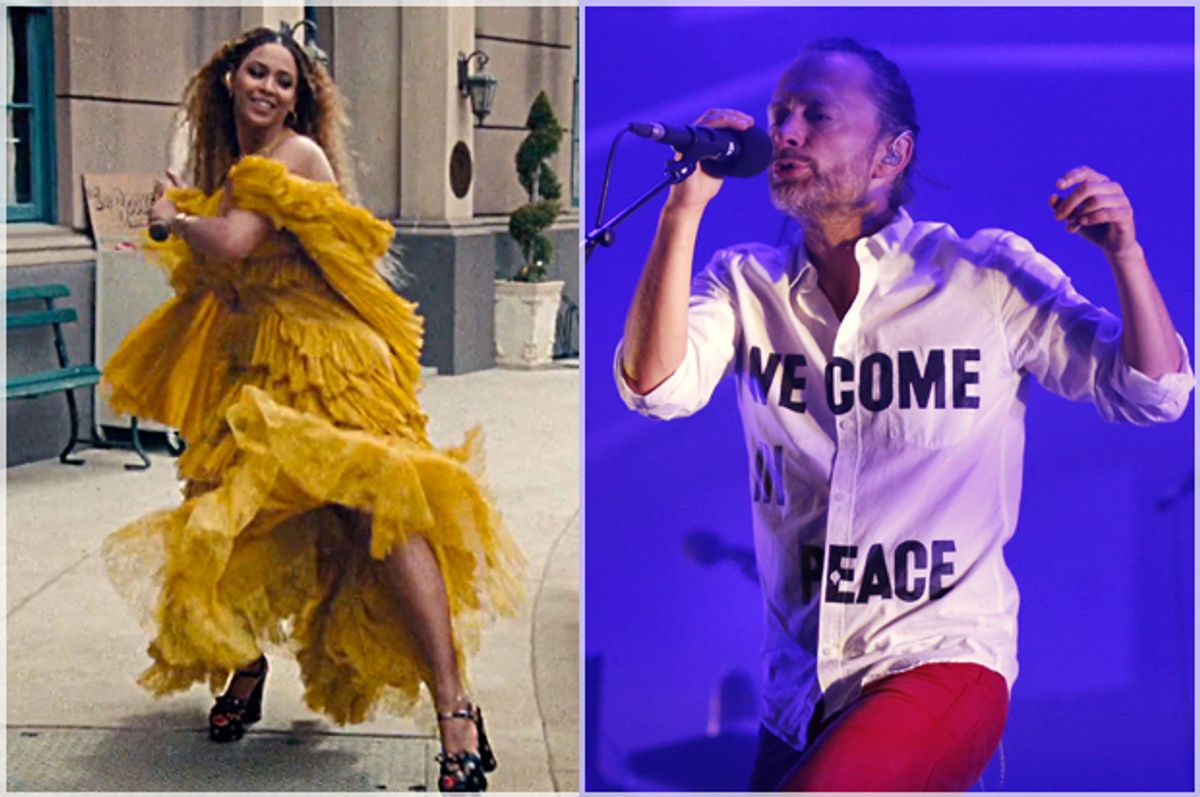 If 2016's blockbuster releases have taught us anything, it's that a protracted promotional period is unnecessary. This trend kicked off in early March with Kendrick Lamar, who unveiled "untitled unmastered" several weeks after debuting a new song at the Grammys. Beyoncé entered the fray in a massive way with the April-released "Lemonade," a video album announced with both a one-hour HBO special and a digital release. That record featured U.K. electro-R&B artist James Blake, who himself unleashed a studio album, "The Colour In Anything," on Friday, May 6. Two days after that, Radiohead digitally released "A Moon Shaped Pool," in the wake of a brief promotional period featuring social media disappearing acts and a mysterious video for the song "Burn The Witch."

None of these albums were surprises, per se—but they did arrive without the months of pre-release rigmarole that once preceded huge records. In the modern era, this trend dates back to Radiohead's 2007 album, "In Rainbows," which was released with 10 days' notice as a pay-what-you-want download. The following year, Nine Inch Nails went one step further and self-released two separate projects, "Ghosts I-IV" and "The Slip," via their website, with only two weeks of advance warning. In the coming years, manufacturing instant urgency around an impending release became a preferred marketing tool and a way to grab the attention of the hyper-speed online news cycle. Naturally, this gimmick tended to work best with high-profile albums and digital music platforms: U2's "Songs Of Innocence" was dropped into people's iTunes accounts in 2014, while Beyoncé also used iTunes to unveil the music and videos from her 2013 self-titled album.

All of these acts have the luxury of a loyal fanbase, name recognition and built-in demand: No matter when they release something, people will listen. And no doubt this release method is a reaction to the propensity of albums leaking early, as well as a proactive measure to prevent promos from circulating. But when outliers drop into an already-crowded new release schedule, it's exacerbating the listener whiplash that's become an increasingly troublesome phenomenon. As fans, it's difficult to focus, engage and actually savor the music that's already out there when there's always something shiny to absorb—a problem present even without the added consideration of no-lead-time releases. "I used to really know so much about contemporary music, because I was an avid reader of the music press and I really knew my shit," Shirley Manson said last year when she spoke to Salon. "And now it’s too much. I’m just overwhelmed by it. I don’t even see a jumping in point without spending hours and hours and hours of my day trying to figure it all out and give everything a listen. It’s just impossible."

The potential consequences are disheartening: more surface relationships with albums and artists; difficulty keeping on top of new releases, even by favorite bands; a propensity to reach for what's familiar, since discovery is overwhelming; and sheer listening fatigue. When every week brings a FOMO situation, the path of least resistance looks more and more appealing. But on a pragmatic scale, there simply aren't enough hours in the day to catch up on a listening backlog or keep up with the number of new bands out there. To keep up with new music is to be in a defensive position, where even an anticipated release often needs to be put on the back burner in favor of something bigger, more popular or simply newer. This phenomenon trickles down to the critical level, too. Coverage-wise, something has to give to make room for unexpected albums by bigger names—and the collateral damage is often other worthy releases that week, which might be downgraded or not covered at all. The repercussions of that are even more disheartening in an age of shrinking word counts (and number of publications).

From a critical standpoint as well, having to immediately form an opinion on something is an experience fraught with anxiety akin to a "Jeopardy!" question countdown. Listening to an album and turning around a cognizant, coherent review within hours isn't easy—it's an approach to criticism and thinking about music that's less about soul-searching and more about impulsive reaction. In a perfect world, these knee-jerk snap judgments would reflect the most primal, emotional responses to a record, and highlight the most heart- and brain-grabbing moments. In reality, as Amanda Petrusich recently examined a The New Yorker piece, "The Music Critic In The Age of the Insta-Release," the "drawbacks to precipitous, hysterical judgment are obvious. Good art often takes time to make, and it often takes time to understand, too. It doesn’t feel unreasonable to suggest that perhaps the very first thing a person should do when faced with some nascent creation is not frantically and qualitatively assess its value."

Yet letting an album sink in over time is a luxury that most writers don't have these days. No website or publication wants to be seen as being behind a news story or trend, whether from an economic or perception standpoint. Chances are, the powers-that-be—whether that's an editorial team or someone higher in a company—will be expecting written commentary about a new release as soon as humanly possible. Although there are many ways to measure online audience engagement or impact, the antiquated mindset that "being first = more clicks" lingers. It's not necessarily an incorrect assumption: Ask any web editor, Beyoncé is a huge online traffic-driver. However, ensuring a news hook garners a site pageviews is a permanent shadow over online editorial departments. And sure, no writer is being forced to participate in the review rat race—but for those whose livelihood is tied to staff jobs or freelance checks, dropping everything to have an opinion is a smart move. (Full disclosure: I've reviewed both "Lemonade" and "A Moon Shaped Pool" very quickly in recent weeks, and enjoyed doing so.)

The paradoxical wrinkle is that long-lead-time album promo campaigns are becoming equally tiresome. Every aspect tied to a new record—release date, track list, album art, lyric videos, regular videos, full-album stream—is now divided into a bite-sized chunk ripe for an exclusive premiere or online reveal. This laborious rollout makes the record's actual release day feel anticlimactic, if not obfuscated: When an album is constantly in the news, it's easy to forget that it's not available yet. There's a big difference between instant and delayed gratification, but the net effect from each is that albums aren't immune from being lost in the shuffle.

As listeners, it's certainly difficult to complain about an abundance of new music. But at the end of the day, it's becoming more difficult to discern whether these dropped-in-our-lap albums are worthy of the fanfare and hype. As Amanda Petrusich noted in her The New Yorker piece, "How much time is enough time to responsibly assess a concept already as odd and pliable as 'merit'? How does art figure into a life? How long will it take until we really know what a song or record means, how it works on us, how it works on others, what it does, if it might endure, and why? Who hasn’t lived with a record for weeks, only to wake up one morning and find that it has suddenly unlocked a whole new suite of rooms deep in one’s subconscious?" Finding out which albums have staying power after the buzz fades is one of the toughest things for a music fan today. Carving out time for such discernment is perhaps even more of a challenge.