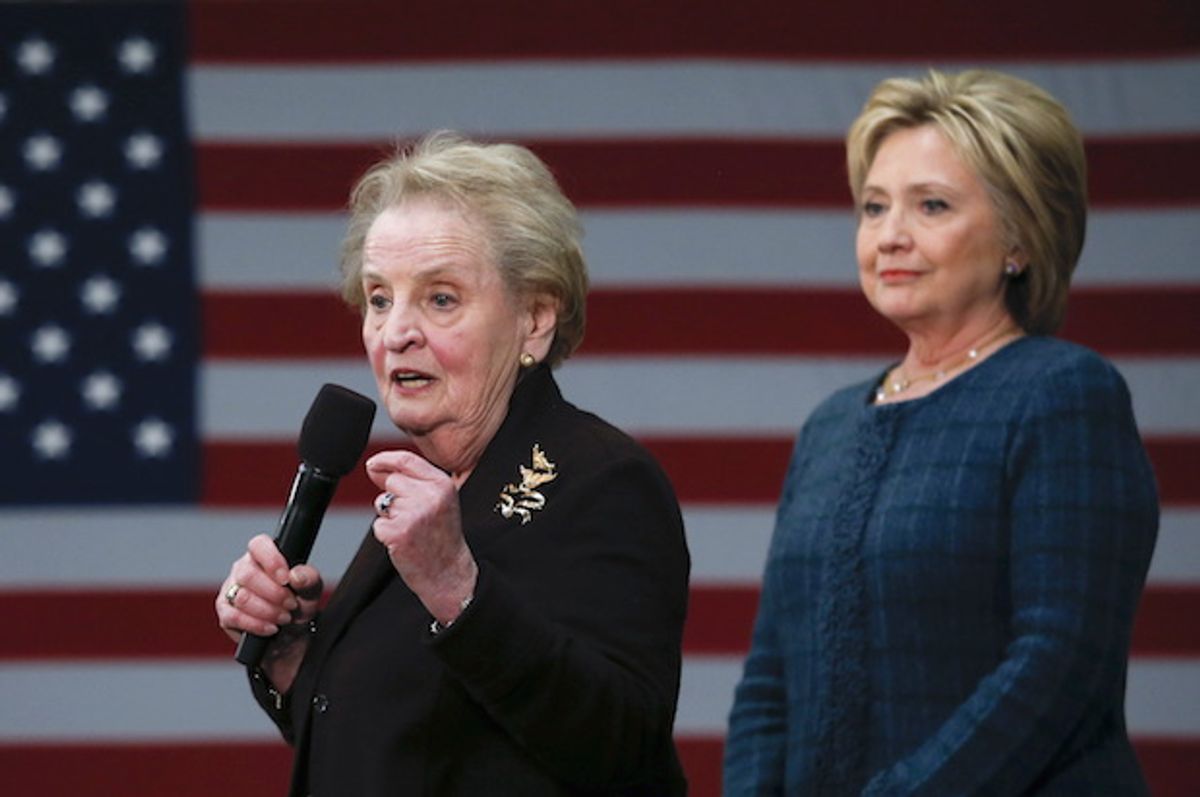 Students and faculty alike have joined in protests at California's Scripps College, where former Secretary of State Madeleine Albright was booked to headline the graduation commencement ceremony.

Critics have blasted the ex-Clinton official as a "war criminal" and "repeated genocide enabler," and have pledged to boycott commencement if she is not disinivited.

The protests have reinvigorated the debate around Albright and her legacy.

Scripps is a prestigious all-women college in Claremont, California. It is relatively small, with just around 1,000 students.

Class President Jennie Xu booked Albright, the first woman to serve as U.S. secretary of state, in early 2015. "She was our top choice," Xu told the Los Angeles Times. "I was really, really ecstatic."

Nearly 30 Scripps staff members published an open letter in the student newspaper in April expressing "outrage" at the selection and declaring that they will not participate in the May 14 graduation ceremony in protest.

As former secretary of state and U.S. ambassador to the United Nations, Albright "supported several policies that led to the deaths of millions of people," the faculty wrote.

They cited numerous examples of extreme crimes of which Albright has been accused, in Iraq, Rwanda, Yugoslavia and Colombia.

In the 1990s, the Clinton administration pressured the U.N. Security Council to impose one of the most brutal sanctions regimes in history on Iraq, ostensibly in order to punish dictator Saddam Hussein — whom the U.S. had backed throughout the Iran-Iraq War in the 1980s — for his 1990 invasion of Kuwait.

A U.N. report found that, from 1991 to late 1995, as many as 576,000 Iraqi children died because of the harsh economic sanctions, of which Albright was a staunch supporter.

The Clinton administration responded not by lifting the sanctions, but rather by helping to create the U.N.'s Oil-for-Food Program, a corruption-plagued agreement in which Iraq gave away its oil in return for basic necessities like food and medicine, which the sanctions restricted.

In an Emmy Award-winning 1996 interview on CBS program "60 Minutes," the Clinton-era secretary of state was asked whether the deaths of half a million Iraqi children was worth it. “The price is worth it,” Albright bluntly replied.

After working for 34 years at the U.N., Humanitarian Coordinator in Iraq Denis Halliday resigned in 1998 in protest of the sanctions, saying they amounted to "genocide" in Iraq.

"We are now in there responsible for killing people, destroying their families, their children, allowing their older parents to die for lack of basic medicines," Halliday said. Other longtime U.N. officials joined Halliday in resigning in protest.

Albright later apologized for seemingly justifying the genocide of Iraqi children, and claimed she was asked a loaded question.

This is perhaps Albright's most infamous moment, but the Scripps faculty cited other crimes of which she has been accused.

The U.S., with Albright's and Bill Clinton's leadership, pressured the U.N. to withdraw peacekeeping forces from Rwanda during the first two weeks of the 1994 genocide that left hundreds of thousands of people dead.

The National Security Archive at George Washington University obtained Clinton White House emails and handwritten notes from Susan Rice — then a member of the National Security Council staff and now a national security advisor and former U.S. ambassador to the U.N. — that show the U.S.'s role in removing the peacekeepers.

A report commissioned by the Organization of African Unity cited by the Scripps scholars reveals that the Clinton administration knew that a genocide was taking place, and yet the "Americans, led by U.S. Ambassador Madeleine Albright, played the key role in blocking more expeditious action by the U.N."

Albright's role in the 1999 NATO bombing of Yugoslavia has also again come under intense scrutiny. While the U.S. stymied U.N. action against the genocide in Rwanda, it claimed that genocide could possibly take place in Yugoslavia if NATO did not intervene (as it would again do in 2011 in order to justify war in Libya).

Former Secretary of State Albright was a staunch supporter of the NATO bombing. The Scripps scholars, however, noted that "the bombing was linked to U.S. efforts to thwart Russia in Europe, and Yugoslavia was given a choice between accepting a peace treaty that allowed a NATO occupation of the country or U.S. bombing."

"Thousands were killed and much of the country’s infrastructure destroyed in what amounted to a U.S.-led NATO aggression," they wrote in the open letter.

Moreover, Albright played a large role in the Clinton administration's so-called Plan Colombia, "which funneled billions of dollars in aid to the country, 80 percent of which took the form of military aid to security forces, during a time when those forces were linked to right-wing paramilitary organizations," the scholars added. This was an extension of the Ronald Reagan administration's support for far-right, anti-communist death squads in Latin America.

"As a women’s liberal arts college, we should promote the advancement of women and transgender peoples broadly and not simply emulate and celebrate those individuals who participate in U.S. state power and wield its violence," the 28 Scripps faculty members wrote in the open letter.

"Representing the category of 'woman' in this way evacuates feminism of its anti-racist, anti-paternalistic, and anti-imperialist potential to address those lives that are systematically made vulnerable to sickness and death," they added.

Supporters of Albright's commencement invitation have turned the incident into a free speech issue.

Denise Nelson Nash, the Scripps College president's chief of staff, told the LA Times Albright's address could be an enriching opportunity for students, who are "looking for someone who is going to inspire them."

Albright herself told the newspaper "I also think they have a duty to listen to people that they might disagree with."

"People have a right to state their views," the accused war criminal said. Albright insisted the protests have something to do with gender, even though Scripps is an all-women college.

In addition to the ceremony at Scripps, the accused war criminal is also speaking at the 2016 commencements at Harvard's John F. Kennedy School of Government and the University of Denver.

In February, Albright publicly declared that there is a "special place in hell" for women who won't vote for Hillary Clinton.

Mabon published an op-ed in the student paper in March titled "Madeleine Albright Has Blood on Her Hands."

"I’m deeply disgusted that on the happiest day of my life (up to this point) I have to sit quietly and smile at the cameras of my parents and grandparents while this woman tells me to go out into the world and be amazing, even though according to her, I’m going to hell," the Scripps senior wrote.

"You see, in addition to Madeleine Albright condemning me to eternal damnation for choosing to vote based on a candidate’s political record and proposed policies instead of my gender identity, her hands are also covered in blood," she continued.

Mabon said she does not mean to discredit "former Secretary Albright’s considerable achievements," but stressed that "we cannot allow people to escape criticism simply because they’re women."

"Madeleine Albright is not my feminist idol. I don’t want her to be my ten-year-old sister’s idol," she wrote. "I cannot forgive her for the deaths of those children or for the trauma her actions helped inflict on hundreds of thousands of people."