Entitled, racist, bigoted, thugs: It is time to call Donald Trump supporters by their real names 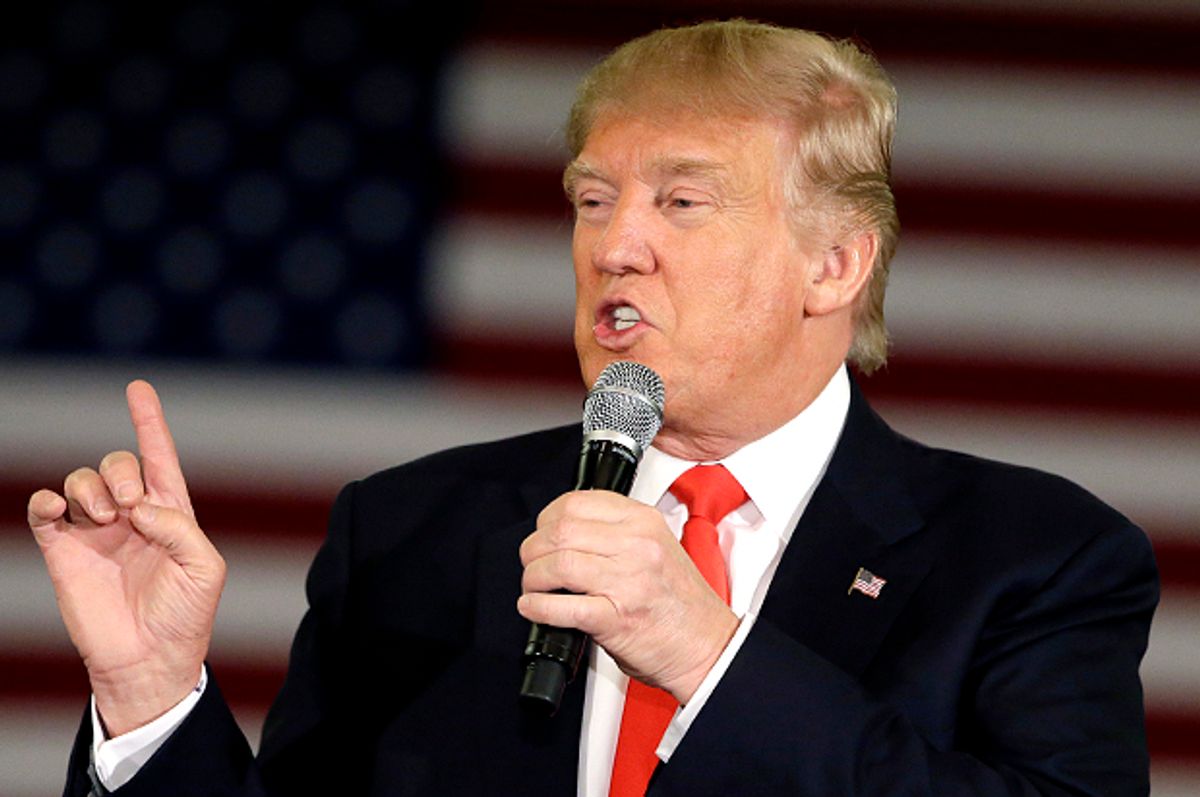 What is the best way to describe Donald Trump’s supporters?

Are they the Tea Party on steroids? Right-wing populists? Fascists? Something else?

During a presidential primary season when so many members of the commentariat and political chattering classes have avoided speaking truth to power, Mike Papantonio’s observation is a refreshing and very important step in the right direction. However, he is still too kind in his description of Donald Trump’s public.

Donald Trump’s supporters are not merely “Trumpublicans,” they are something far worse: his voters are actually “Trump-thug-licans.”

Donald Trump is the leader of a cult of personality. Traditional political wisdom suggests that voters respond positively to consistency and predictability in their elected officials and candidates. Trump has upended such standing norms and logic: he changes his opinions in response to the political winds, offers no apology or shame for doing so, and is rarely held accountable by the news media for such decisions.

And while considered a sin in American (especially right-wing) politics, to change one’s opinion in the face of new information is, in reality, a mark of wisdom and intelligence. But Donald Trump is not acting in the pursuit of wisdom, knowledge, or to advance the Common Good. He is a nihilistic pragmatist who craves power at any cost—and will say and do anything to achieve said goal.

To that end, Donald Trump is a name brand; he is also a reality TV show hustler who is simply applying his carnival tricks and con artist routine to another venue of American life.

Donald Trump’s supporters have demonstrated a pattern of politically thuggery that is almost unprecedented in modern American politics. His rallies—which are more like human political rodeos—feature violence against those who dare to protest Trump’s bigotry, racism, and nativism as the central attraction. Trump, the master showman, orchestrates the violence by promising to pay the legal fees of “his people” who attack protesters, gesticulating from the podium and ranting about how violence is fun, and reminiscing about “the good old days” when “protesters” would be taken out on stretchers.

Donald Trump’s supporters have physically assaulted people they identified as “illegal immigrants” or as enemies of the American Il Duce’s movement and message.

Republicans form the core of Donald Trump’s base of support. White, angry, entitled, nativist, bigoted, and racist voters constitute the base of the Republican Party in the Age of Obama and the post-civil rights era. While a lazy corporate news media has tried to spin the rise of Donald Trump as some type of aberration for the Republican Party and movement conservatism, he is instead the logical outcome and spawn of at least five decades of right-wing social and economic policies.

Trump’s brand of gross antipathy towards Muslims, hostility to Hispanics and Latinos, anti-black racism, and declaration of war on “political correctness”—what is just a right-wing talking point dog whistle for disrespecting the human rights and dignity of anyone who is not white, male, Christian, and heterosexual—is the American right-wing’s playbook of the Culture War, Southern Strategy and Fox News-talk radio bubble of epistemic closure and disinformation brought to fruition with a faux populist bent.

The Republican Party’s elites and news media have tried to use this formula to create a controlled political explosion. Instead, Donald Trump took the same ingredients and made a dirty bomb of radiation and indiscriminate shrapnel.

The corporate news media is complicit in allowing a proto-fascist to become the presumed presidential nominee of one of the United States’ two institutional political parties. In exchange for viewers and money, the corporate news media normalized and mainstreamed Donald Trump’s political poison into the American body politic. The Fourth Estate is supposed to be the guardian and watchdog of democracy; in the case of “Trumpmania” many of its members instead chose to be enablers and fans.

One should also not ignore how this abandonment of responsibility (and accountability) is part of a several decades-long pattern where the so-called liberal news media has coddled and enabled the lies, distortions, and civic irresponsibility by the Republican Party specifically, and conservatives, more generally.

The corporate news media and its army of so-called “experts” and “opinion leaders” cannot undo the harm they have done to American politics during the 2016 presidential primaries. They can however start to use accurate language to describe Donald Trump and his supporters. These racists, bigots, nativists, bullies, and right-wing authoritarians are Trumpthuglicans. It is long overdue that that this rabble is described by the mainstream news media and political chattering classes with the scorn and disgust they have earned and deserve.