The real costs of a "Marvel body": How the pressure to look like Thor and Captain America is hurting men 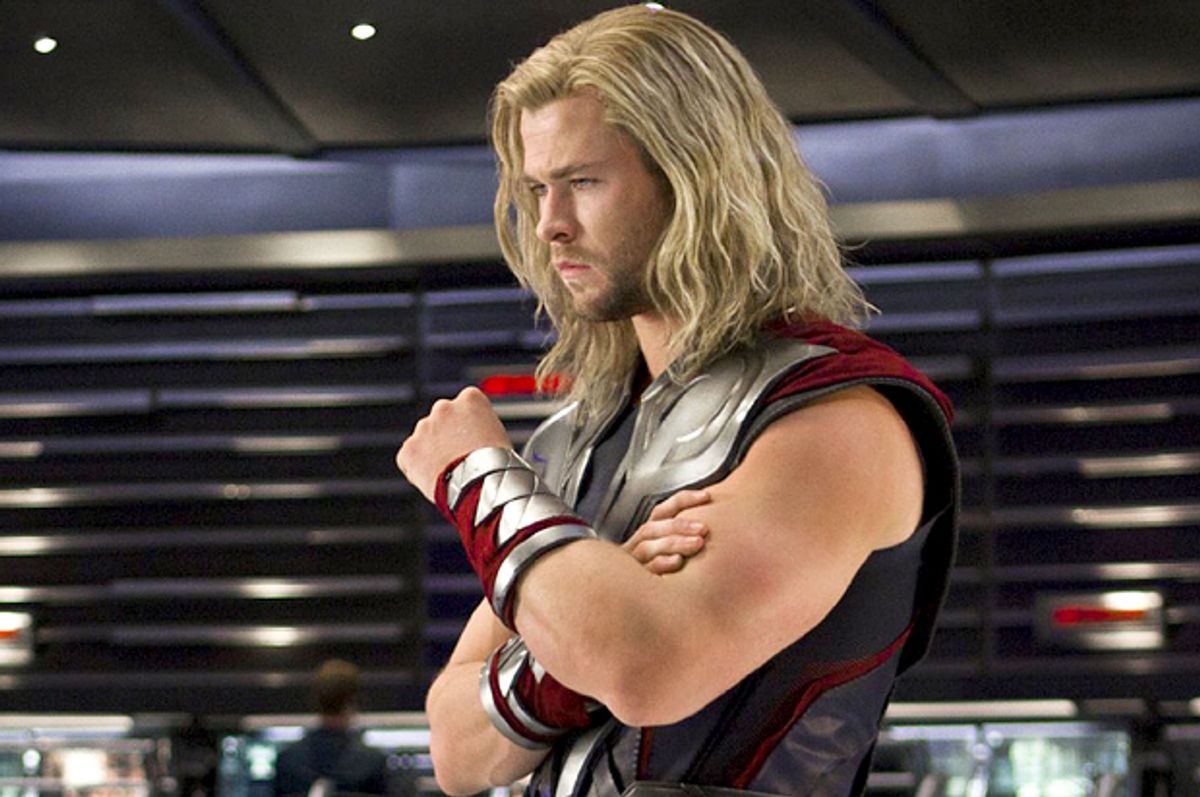 Chris Hemsworth as Thor in "The Avengers" (Marvel)
--

Do you want a body like a Marvel superhero? Be prepared to eat—a lot.

In a recent interview with BuzzFeed, Chris Hemsworth’s stunt double, Bobby Holland Hanton, told the outlet that he has to eat 35 times a day to “anywhere near [Hemsworth’s] size.” Henton, who claims that he also worked out twice a day to stay in superhero shape, previously told Muscle and Fitness that his high protein diet (which consisted of turkey, chicken, nuts, eggs, and spinach) was a massive impediment to having a healthy social life: “It made me kind of unsociable in a way because you can’t go out with friends or family because you’re picking what you can and can’t in the menu. … It was a big challenge for me.”

Hanton’s interview illustrates the extreme pressures that men face to be as fit and as big as humanly possible. Following the success of “The Avengers,” and most recently “Captain America: Civil War,” a number of workout and diet regimens promise to help men look like Thor, Hawkeye, and the Captain (in as little as six weeks!). These routines have become so widespread that as Muscle and Fitness reports, they are arguably more popular than the actors who popularized them: “The physique he built has made ‘Chris Hemsworth Workout’ the top search suggestion when you punch the actor’s name into Google.”

There are several different Marvel-themed programs that will help men seeking maximum muscularity achieve their fitness goals, many of which are prohibitively expensive. If the USDA estimated in 2016 that the average adult male aged 19-50 spends around $69.80 every week on food, that’s based on the expectation that these men eat around three meals a day—with perhaps a snack in between. Hanton eats 10 times that amount, meaning that a fitness enthusiast hoping to keep pace with his diet would spend $698 a week to do so. That comes out to $36,000 a year. (To clarify: That's a top-end estimate; it's possible Hanton is not eating full meals every time he eats.) That’s not even adding in the costs of paid programs like CrossFit, which commonly set members back around $200 each month.

In addition to the cost, there are a number of dangers to the Marvel plan. The first is overexertion: As Time reported in February of last year, working out too much can actually be just as harmful for one’s health as working out too little. Researchers in Denmark found that “people who push their bodies too hard may essentially undo the benefit of exercise.” In the case of Gerard Butler, the famously grueling workout he was subjected to for “300” stopped him from exercising at all after the movie wrapped; he quit working out for a year. In a 2007 interview with Film Monthly, the Scottish actor claimed that he would never make the choice to put his body through that again.

Extreme fitness programs can be dangerous in a variety of ways: They are bad for your body, decrease life expectancy, and are associated with a high rate of injury. As fitness instructor Erin Simmons argued in a 2014 article on CrossFit, crash exercising can be a gift to doctors because it “means job security for medical professionals.” Simmons spoke with a number of “strength and conditioning coaches” about the rise of regimes like CrossFit and “not a single one of them” would recommend it. She continues, “These same athletic trainers warn every single athlete against CrossFit and tell them the health risks of being involved in it.”

With the extreme risks and financial burden associated with looking like Steve Rogers, it’s worth asking: Is this emphasis on getting big at all costs making us any happier? In 2015, a BBC report noted that "bigorexia" (more accurately known as “muscle dysphoria”) is on the rise in young men. Rob Willson, who serves as the president of the Body Dysmorphic Disorder Foundation, told the BBC: “We know about 10 percent of men in the gym may have muscle dysmorphia.” Dr. Michele Kerulis of Adler School of Professional Psychology told The Daily Mail that rate may be even higher: She claimed as many as 45 percent of frequent male gym goers male suffer from disordered body image.

That estimate seems very high, but it’s impossible to ignore the fact that male body standards have changed dramatically since Superman looked like George Reeves, rather than a human action figure. There’s nothing wrong with wanting to build muscle mass or be fit, but it’s worth remembering that there’s a reason Chris Hemsworth has the ability to look like a Norse God: He’s paid to. He has the luxury to spend absurdly long hours in the gym because it is his job. For the rest of us, attempting to live our lives by those same standards isn’t just impossible. It might be killing us.