The right's absurd Facebook freakout: How the uproar over "Trending Topics" exposes its gargantuan victim complex

Normally, conservatives are arguing against government intervention into private business. Not this time 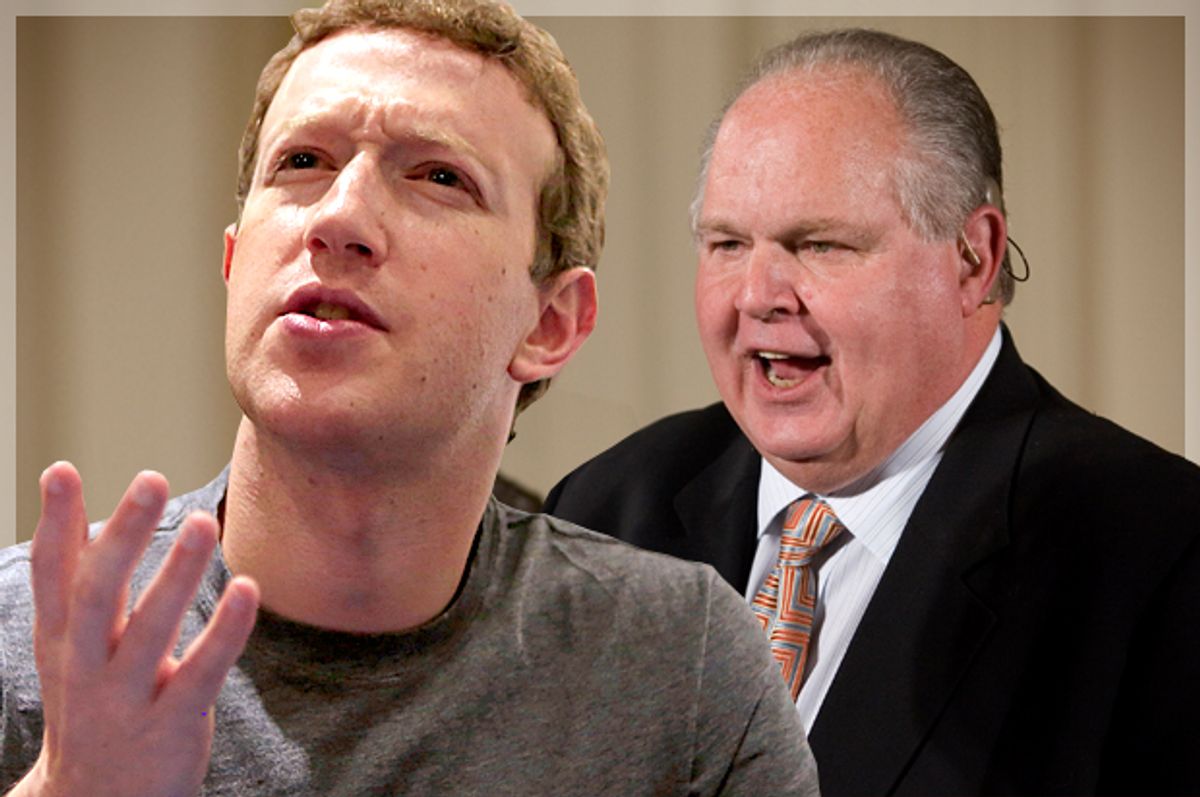 If you have a Facebook account, you may have noticed the Trending Topics widget that appears in the upper-right corner of every user’s homepage. This list of news stories listed as trending is usually fairly mindless piffle. (As I write this, the top two stories on my page are about baseball star Bryce Harper cursing at an umpire and Justin Bieber’s new face tattoo.) Still, placement of links can result in enormous traffic increases for the sites that publish the stories covering the topics listed. Capturing that traffic is essential to the survival of news websites. And if the topic is a big, national or international story like the recent death of the musician Prince or the Belgium airport bombing, Facebook links can be essential.

Facebook has been developing the widget for a couple of years as it seeks to become a “neutral pipeline” driving traffic to other websites and, not coincidentally, making itself the arbiter of what news becomes important to the online world. In theory, the word “neutral” is supposed to protect the company against charges that it displays any bias against any political ideology. In practice, of course, it isn’t that simple.

Over the last week, Gizmodo has published a couple of stories tracing the combination of computer algorithm and human decision-making that decides what topics appear in the widget. The stories interviewed anonymous former Facebook workers who claimed that the company showed bias against conservative news sources such as Breitbart and the Daily Caller. Stories from those sites were regularly ignored unless a more mainstream source like the New York Times was also covering them.

Now, a normal human might think it a net positive to humanity if the openly racist swill published by the alt-right chuckleheads at Breitbart is being marginalized. But these are conservatives we’re talking about, so reaction has been swift and apoplectic. On Tuesday, Sen. John Thune (R-SD), who heads the Senate’s Commerce Committee, demanded that Facebook provide him with information about how it determines what news goes in the Trending Topics session, and whether the company is purposely repressing conservative news and sources.

Thank goodness for John Thune. The Senate can’t find time in its hectic three-day workweeks to write budget appropriations bills, dig up the money to help prepare for a possible outbreak of the Zika virus, or do something about Puerto Rico’s debt crisis. But someone’s conservative grandmother might not have seen an important story about how the Catholic school Paul Ryan’s kids attend asks prospective students if they are Catholic in her Facebook news widget, and suddenly Republicans can find a use for the government they usually decry as overbearing and intrusive.

The possibility that private companies are repressing their free speech is a terror that strikes conservatives regularly when a Democrat is in the White House or an election is approaching. Early in the Obama administration, a rumor circulated on the right that the Kenyan-Muslim Usurper planned to reinstitute the Fairness Doctrine, a relic of the early era of television broadcasting. The Fairness Doctrine required holders of broadcast licenses to occasionally air content about important social and political issues, and to give equal airtime to multiple points of view on the subject. The FCC abolished it in 1987 during the de-regulation frenzy of the Reagan administration. Ever since, conservatives have policed liberals for any hint that they may want to reinstitute it. This stance required the Obama administration to publicly state it had no intention of doing so, and for the president himself to announce that he did not favor the Fairness Doctrine in a probably-useless attempt to soothe their fee-fees.

By the way, if anyone would like to know what John Thune thought of the Fairness Doctrine and the whole idea of government “chilling” the free speech of private media companies, this editorial for Real Clear Politics in 2007 should answer the question. Spoiler alert: He opposed the idea.

Joking aside, there are a couple of points to make about this story: One is that Facebook is one of the world’s most highly trafficked sites, so that gives it tremendous power as a news aggregator. But as a private media company, it is under no obligation to be fair and balanced, or to push links to any conservative media site if it does not wish to do so. That the Senate should investigate it for this practice – if Facebook indeed is even engaging in it – is absurd. Facebook is not providing a public-facing accommodation like, say, a bakery that refuses to bake a cake for a same-sex wedding. That conservatives, who usually screech loudly about government interference in anything, are the ones doing the investigating would be laughingly ironic, if it wasn’t for the fact that they thrive on pretending to be persecuted underdogs at all times. That just makes the whole spectacle sad.