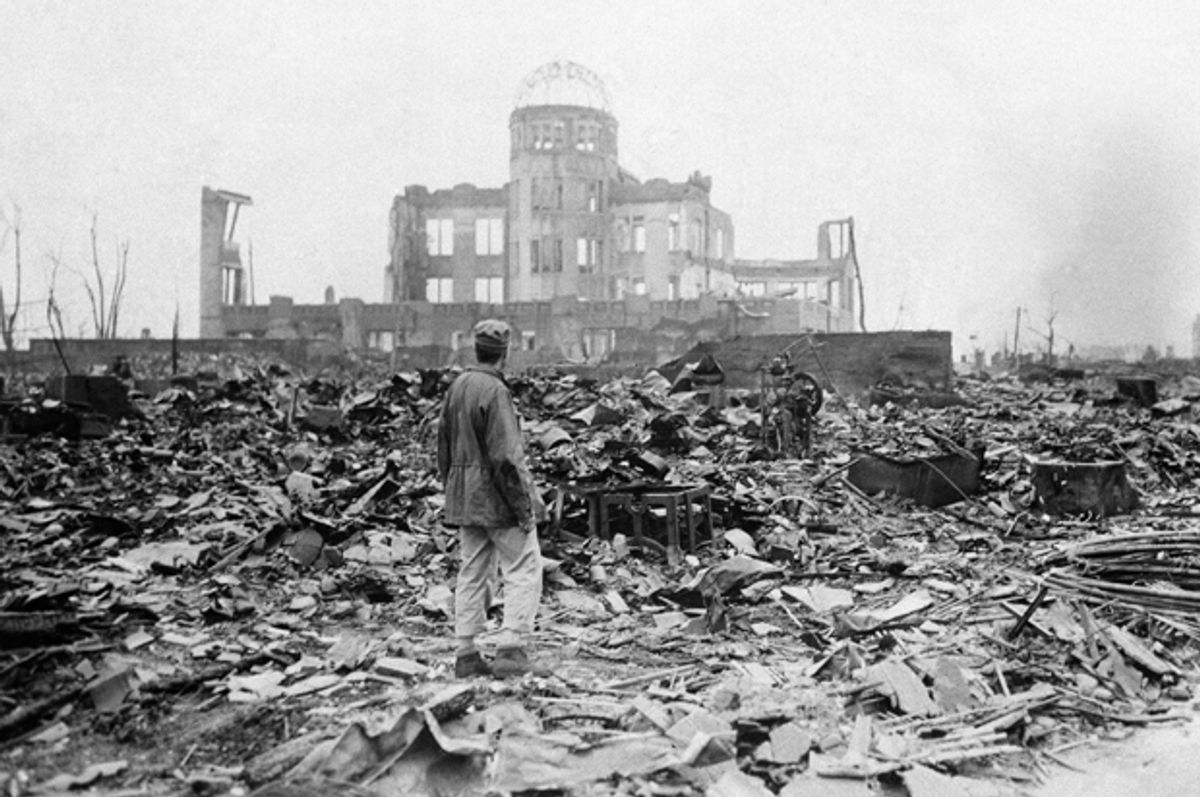 When President Obama visits Hiroshima later this month, he might do well to reflect on the views of another President who was also the five-star general who oversaw America’s military victory in World War II. In a 1963 interview on the use of the atomic bomb against Hiroshima, President Dwight D. Eisenhower bluntly declared that “…it wasn’t necessary to hit them with that awful thing.”

Eisenhower was even more specific in his memoirs, writing that when he was informed by Secretary of War Henry L. Stimson the bomb was about to be used against Japan “…I had been conscious of a feeling of depression and so I voiced to him my grave misgivings, first on the basis of my belief that Japan was already defeated and that dropping the bomb was completely unnecessary, and secondly because I thought that our country should avoid shocking world opinion by the use of a weapon whose employment was, I thought, no longer mandatory as a measure to save American lives…”

Eisenhower was not alone. Many of the top military leaders, mostly conservatives, went public after World War II with similar judgments. The President's chief of staff, William D. Leahy--the five-star admiral who presided over meetings of the Joint Chiefs of Staff--noted in his diary seven weeks before the bombing of Hiroshima: “It is my opinion that at the present time a surrender of Japan can be arranged with terms that can be accepted by Japan and that will make fully satisfactory provision for America's defense against future trans-Pacific aggression.”

After the war Leahy declared in his 1950 memoir: “It is my opinion that the use of this barbarous weapon at Hiroshima and Nagasaki was of no material assistance in our war against Japan. The Japanese were already defeated and ready to surrender….My own feeling was that in being the first to use it, we had adopted ethical standard common to the barbarians of the Dark Ages. I was not taught to make war in that fashion, and wars cannot be won by destroying women and children…”

Just a few weeks after the bombing, the famous "hawk" who led the Twenty-First Bomber Command, Major General Curtis E. LeMay, stated publicly that “The war would have been over in two weeks without the Russians entering and without the atomic bomb…the atomic bomb had nothing to do with the end of the war at all."

It is possible to go down the line and find similar views among most of the top World War II military figures. Many of those who had access to secret intelligence showing Japan’s desperate attempts to end the war were deeply disturbed by the bombing. Fleet Admiral Chester W. Nimitz, commander in chief of the Pacific Fleet stated publicly two months after Hiroshima: “The Japanese had, in fact, already sued for peace before the atomic age was announced to the world with the destruction of Hiroshima and before the Russian entry into the war.” “The atomic bomb,” he stated “played no decisive part, from a purely military standpoint, in the defeat of Japan….”

A contemporaneous May 29, 1945 memorandum by Assistant Secretary of War John J. McCloy also shows that America’s top military leader, General George C. Marshall, “thought these weapons might first be used against straight military objectives such as a large naval installation and then if no complete result was derived from the effect of that, he thought we ought to designate a number of large manufacturing areas from which the people would be warned to leave—telling the Japanese that we intend to destroy such centers...”

As the 40th anniversary of the bombing of Hiroshima approached in 1985, former President Richard Nixon reported that “[General Douglas] MacArthur once spoke to me very eloquently about it, pacing the floor of his apartment in the Waldorf. He thought it a tragedy that the bomb was ever exploded. MacArthur believed that the same restrictions ought to apply to atomic weapons as to conventional weapons, that the military objective should always be limited damage to noncombatants…MacArthur, you see, was a soldier. He believed in using force only against military targets, and that is why the nuclear thing turned him off…”

Modern debates over the decision to use the atomic bomb without warning against a predominantly civilian target would also do well to include reminders that President Truman was advised well before Hiroshima that a Red Army declaration of War against Japan, planned at U.S. request for the first week of August, together with assurances for the Japanese Emperor, would bring an end to the war long before even the first stage landing of an invasion might occur three months later on the Island of Kyushu (and long before any possible general invasion in the spring of 1946.) There was plenty of time to use the bombs if the recommended strategy failed (and it had already been decided in any case to keep the Emperor to help control Japan after the war.)

A poll taken in 1991 at the time of the 50th anniversary of the Japanese attack on Pearl Harbor reported that roughly half of Americans surveyed felt that both sides should apologize for the respective acts which marked the beginning and the end of World War II—a morally important suggestion worthy of deep consideration, and one that President Obama might put forward as he prepares for his visit Hiroshima.

Gar Alperovitz, former Lionel R. Bauman Professor of Political Economy at the University of Maryland, is the author of The Decision to Use the Atomic Bomb.