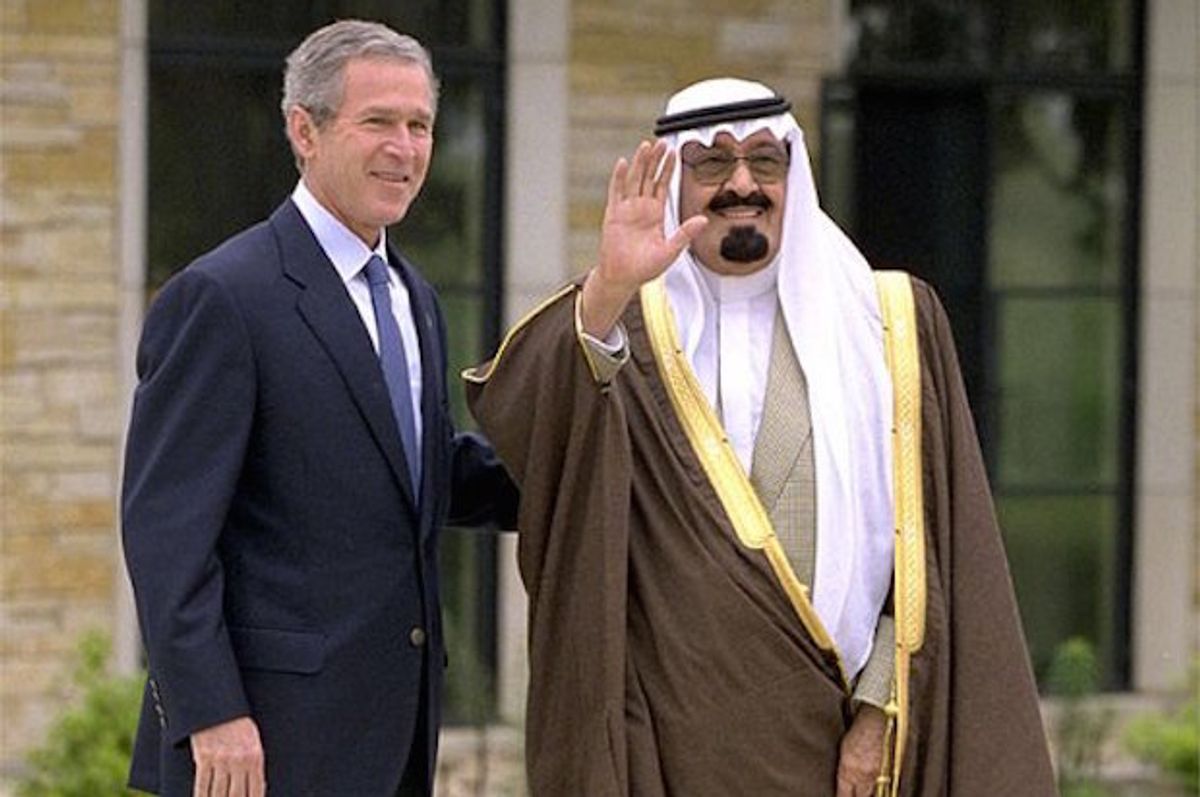 Saudi officials supported the Sept. 11, 2001 attackers, says a former member of the 9/11 commission.

“There was an awful lot of participation by Saudi individuals in supporting the hijackers, and some of those people worked in the Saudi government,” commission member John F. Lehman said in an interview with the Guardian.

He says at least five Saudi regime officials were strongly suspected of being involved in the al-Qaeda support network.

“Our report should never have been read as an exoneration of Saudi Arabia,” Lehman said, referring to the 9/11 commission's 2004 final report that minimized the Saudi regime's alleged role.

Although tepid, the 9/11 commission did criticize the closely U.S.-allied theocratic Saudi monarchy for sponsoring the fundamentalist Wahhabi interpretation of Islam embraced by extremists. It also acknowledged the Saudi royal family’s ties to charity groups that supported al-Qaeda before 9/11, but claimed there was no evidence of links to the Sept. 11 attacks.

Lehman, a Republican who served as secretary of the Navy in the Reagan administration and is now an investment banker, says the report didn't go far enough.

He has joined several other commission members in calling on the Obama administration to promptly declassify the secret 28 pages of a congressional report that detail foreign support for the 9/11 al-Qaeda attackers.

Former Sen. Bob Graham, who chaired the Senate Intelligence Committee during and after the 9/11 attacks, has repeatedly said these pages show Saudi involvement.

This is the first sign of a public split among the 10 9/11 commissioners, reports the Guardian, in an explosive story written by Philip Shenon, the author of "The Commission: The Uncensored History of the 9/11 Investigation."

In April, the former chairman and vice chairman of the 9/11 commission praised oil-rich Saudi Arabia as a close "ally of the United States in combating terrorism" and asked the Obama administration to reconsider releasing the 28 pages, claiming they contain "raw, unvetted" information that could be misinterpreted.

In reality, the U.S. government's own secret documents, released by whistleblowing journalism organization Wikileaks, admit that “Saudi Arabia remains a critical financial support base for al-Qa’ida, the Taliban, LeT, and other terrorist groups”; and “donors in Saudi Arabia constitute the most significant source of funding to Sunni terrorist groups worldwide.”

The European Parliament has said the same, reporting “Saudi Arabia has been a major source of financing to rebel and terrorist organisations since the 1970s.”

The Saudi regime also uses its vast oil wealth to buy influence. U.S. media outlets have recently devoted more and more attention to investigating the millions of dollars the Saudi monarchy spends on its vast network of public relations and lobby firms in D.C.

Of the 19 Sept. 11 attackers, 15 were citizens of Saudi Arabia. Zacarias Moussaoui, a convicted 9/11 plotter, confessed in sworn testimony to U.S. authorities that members of the Saudi royal family funded al-Qaeda before the attacks. The Saudi monarchy strongly denies this.

The chairman and vice-chairman of the 9/11 commission claimed the only Saudi regime official implicated was Fahad al-Thumairy, a former diplomat in the Saudi consulate in Los Angeles. Al-Thumairy was deported from the U.S. but was never charged with a crime, even after being suspected of supporting two Saudi hijackers who lived in San Diego before the Sept. 11 attacks.

Lehman said he does not believe the Saudi royal family itself supported the 9/11 attack, but noted the investigation after 9/11 was on the Saudi ministry of Islamic affairs, which sponsored Thumairy in the U.S. and "has long been suspected of ties to extremist groups," the Guardian reported.

In the interview cited by the newspaper, Lehman said the commissioners' claims that only one Saudi government employee was “implicated” is “a game of semantics.”

“They may not have been indicted, but they were certainly implicated,” Lehman said. “There was an awful lot of circumstantial evidence.”

Another commissioner, former Democratic congressman Tim Roemer of Indiana, told the Guardian he wants the 28 pages released, adding, when it comes to the Saudis, “we still haven’t gotten to the bottom of what happened on 9/11.”

Another panel member who asked to remain anonymous also called for the declassification, and suggested that the commission did not adequately investigate the alleged involvement of the Saudi regime.

“I think we were tough on the Saudis, but obviously not tough enough,” the commissioner told the Guardian. “I know some members of the staff felt we went much too easy on the Saudis. I didn’t really know the extent of it until after the report came out.”

The commissioner recalled that investigators said the final report underplayed or ignored evidence that Saudi officials, especially lower-level ones, were part of an al-Qaeda support network.

Another commissioner, former Nebraska Democratic Sen. Bob Kerrey, joined Lehman in filing affidavits in 2015 in support of a lawsuit brought against the Saudi government by the families of Sept. 11 victims.

The 9/11 commission’s right-wing executive director, former Bush official and historian Philip Zelikow, was particularly adamant about resisting the notion that the Saudi regime was involved in the attacks, the Guardian reported.

Zelikow reportedly fired a staffer who protested limits on the Saudi investigation. Two other investigators focused on the alleged Saudi role also said they were astonished to learn that some of the strongest evidence on Saudi ties was either removed from the report or pushed to tiny footnotes.

Zelikow came under attack in 2006 when scholars unearthed comments he had made in 2002, in which he stressed something must be done about Iraqi dictator Saddam Hussein not because he posed a threat to the U.S., but rather because he threatened Israel.

The debate about the 28 declassified pages of the joint House-Senate report was reinvigorated when CBS News program "60 Minutes" devoted a segment to them in April. "60 Minutes" interviewed Sen. Bob Graham, who served on the Senate Intelligence Committee for a decade, chairing it during and after Sept. 11.

Graham has called extremist groups like ISIS and al-Qaeda “a product of Saudi ideals, Saudi money and Saudi organizational support.”

In his 2004 book “Intelligence Matters: The CIA, the FBI, Saudi Arabia, and the Failure of America’s War on Terror,” and in the more than a decade since publishing it, Sen. Graham has insisted that there needs to be more investigation into Saudi Arabia's alleged ties to the 9/11 attacks that left nearly 3,000 Americans dead.