Need proof that the "gig economy" is painful? Just ask people who work for Uber or Lyft 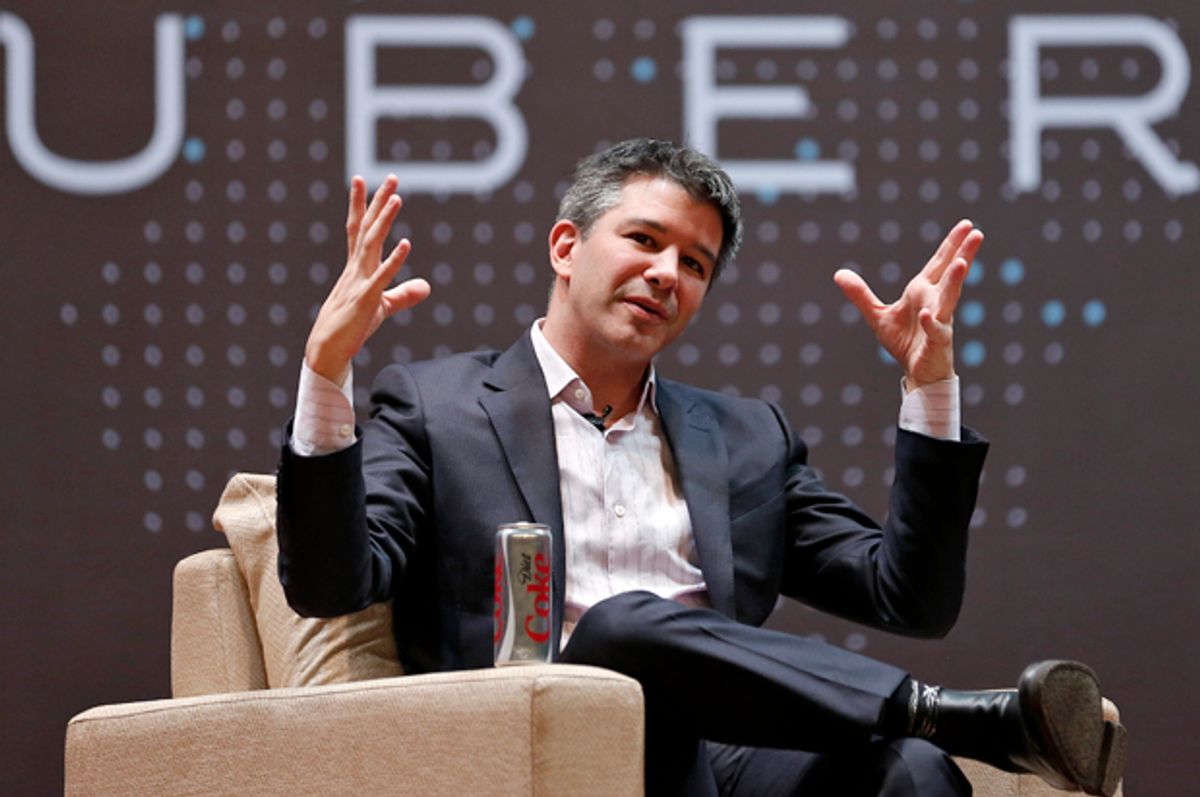 Pouty, whiney, and spoiled-bratism is not nice coming from a 4-year-old — but it's grotesque when it comes from billion-dollar corporate elites like Uber and Lyft.

The two internet-based ride-hiring brats call themselves "ridesharing" companies, but that's a deceit, for they don't share anything — their business model relies on folks needing a ride to hire a driver through the corporations' apps. With the bulk of the fare going to out-of-town corporate hedge funders.

The tow outfits have swaggered into cities all across our country, insisting that they're innovative, tech-driven geniuses. As such, they consider themselves above the fusty old laws that other transportation companies, like taxis, follow. So Uber and Lyft have made it a corporate policy to throw hissy fits when cities— from Los Angeles to Atlanta, Houston to Portland — have dared even to propose that they obey rules to protect customers and drivers.

The latest tantrum from the California giants happened in Austin, when the city council there adopted a few modest, perfectly reasonable rules, despite the screams of PR flacks from both outfits. The petulant duo then used fibs and high-pressure tactics to get enough signatures on petitions to force a special election to overturn the council's action. Naturally, being brats, they gave the city an ultimatum — "Vote our way or we will leave town"— and assumed that Austin's tech-savvy voters would flock to do whatever the popular ride-sharing service wanted.

But they picked the wrong city. First, they ran a campaign of blatant lies, as though Austinites wouldn't question them. Then, they shoved a sickening level of corporate cash into their campaign, apparently thinking that the sheer tonnage of ads would win the day for them. However, the slicks from California turned out to be uber-goobers. Despite spending $9 million (more than the combined spending of all city council candidates in the past decade), they went down, 56-to-44 percent.

Since they didn't win their campaign, Uber and Lyft have now left town in a huff leaving their 10,000 Austin workers/drivers behind to fend for themselves. Since their workers are considered contract employees, there will be no severance package or unemployment benefits for them.

This is part of the new "gig economy"— the latest corporate buzz-phrase from Silicon Valley to Wall Street. CEOs are hailing a Brave New Workplace in which we lucky worker bees no longer have to be suck in traditional jobs with traditional hours, traditional middle-class pay scales, traditional benefits, traditional job security, and all those other fusty "traditionals" of the old workplace, In fact, in the gig economy, you're not even bothered with having a workplace. Rather, you'll be "liberated" to work in a series of short-term jobs in many places, always being on-call through a mobile app on your smart phone or through a temp agency. How exciting is that?

Well, they use "exciting" in the sense of distressing and nerve-wracking. The gig economy means you're on your own— you're not an employee, but an "independent contractor," with no rights and no union. You might have lots of calls to work this week, but there'll be many weeks with no calls. Don't get sick, injured or wreck your car, for no health care or workers' comp are provided. A pension? Your retirement plan is called "adios chump."

This "alternative work arrangement" is not a futuristic concept— it's already here and spreading quickly. And it's not just ride-hiring gigs either. Some 16 percent of U.S. workers are now in this on-call, temporary, part-time, low-pay, you're-on-your-own economy, up from only 10 percent a decade ago. Corporate chieftains (backed by the economists and politicians they purchase) are creating what they call a workforce of non-employees for one reason: Greed. It directly transfers more money and power from workaday families into the coffers of moneyed elites.

Their gig economy is aptly named, for "gigs" are crude four-hook fishing devices that are dragged by commercial fleets through schools of fish to impale them, haul them in, and cash in on the pain. And if you don't think the gig economy is painful, why don't you ask the 10,000 Uber and Lyft workers in Austin how they feel about it?

(Editor's note: This column has been revised since its original publication)