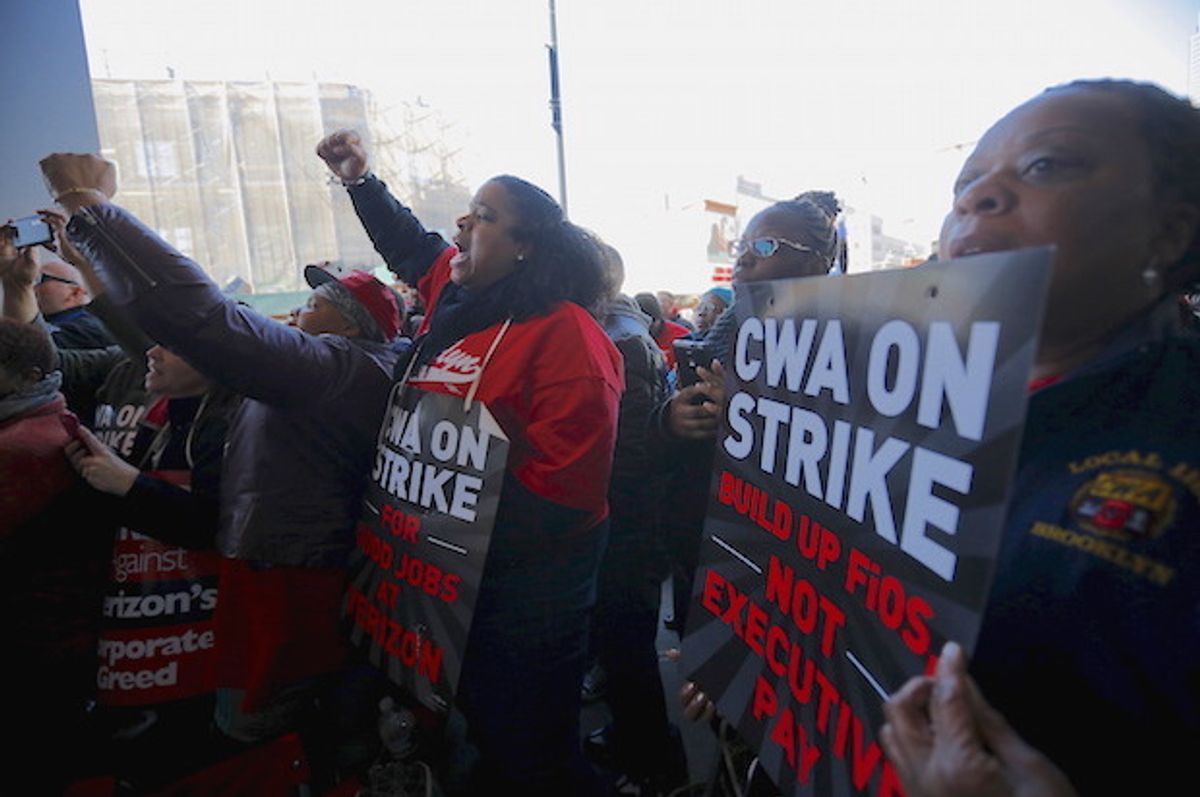 The union that is on strike against corporate telecommunications giant Verizon alleges that its representatives were confronted by a heavily armed "SWAT team" in the Philippines, where it says it discovered undeclared offshore operations. Verizon strongly denies the accusations.

Chris Shelton, president of Communications Workers of America, or CWA, says his union was contacted by call center workers in the Philippines who work for Verizon. CWA says it sent four representatives to the Philippines this week, where they "discovered that the extent to which Verizon is offshoring work is far beyond what has previously been reported and what the company publicly has acknowledged."

CWA alleges that Verizon is offshoring U.S. customer service calls to centers in the Philippines, where workers are paid as little as $1.78 an hour. The union says that Filipino workers told it they are being forced to work overtime an extra one to two hours each day, along with another full eight-hour sixth day, and are not receiving additional overtime compensation.

In a statement, CWA also claimed that, when it discovered the alleged offshored operations, the company sent armed forces to intimidate union representatives in the Philippines.

"Terrified that the public might find out about what has happened to the good middle-class jobs the company has shipped overseas, Verizon sent private armed security forces after peaceful CWA representatives and called in a SWAT team armed with automatic weapons," the union wrote in a statement.

A spokesperson also provided Salon with photos and video of the armed forces that she says were taken by UNI Global Union representatives with the CWA reps in the Philippines. .@CWAUnion says this video is of the SWAT team called on union reps in the Philippineshttps://t.co/eaOeMYlsX8 pic.twitter.com/gbREbn76FW Verizon flatly rejected the union's accusations. Salon reached out to the company, and spokesperson Rich Young described the allegations as "misguided assertions."

“Yet again, this is another page straight out of the CWA's fictional storybook," Young said, rejecting the union's statement.

"The real question is why would CWA president Chris Shelton spend tens of thousands of dollars in union dues on a vacation to the Philippines at a time when 36,000 of our employees are lucky to get $200 a week from a union strike fund?" Young added.

Shelton, in turn, criticized Verizon's claims. "Verizon has doubled down on its deception, claiming workers were on a 'vacation.' Let’s be clear: being on strike, exposing Verizon’s lies about off-shoring and being harassed by Verizon armed security guards is no vacation," he said.

CWA says a delegation of union officials — including its own representatives along with reps from the UNI global union the Filipino union KMU— confronted Verizon officials in its corporate headquarters in the Philippines on Wednesday, May 11.

The delegation claims that Verizon officials refused to speak to the union representatives. "Presumably, it is difficult to justify paying workers $1.78 an hour when the company’s CEO made $18 million last year, and the company has piled up $1.5 billion a month in profits for the past 15 months," CWA wrote in a statement.

In a statement, the union alleged that when the delegation left the headquarters: "Verizon had their armed private security team pull over the departing van on a public street. The Verizon security team then called in a SWAT team, who surrounded the car, bearing automatic weapons. One police officer with his face covered in a balaclava pounded on the van window with his automatic rifle, demanding that the labor representatives leave the vehicle."

The union representatives, including CWA staff, a representative of UNI (global labor federation) and representatives of KMU (a Filipino union), were allowed to leave without further issue, as they had done nothing illegal and the police had no cause to detain them.

Verizon rejected CWA's accusations as "fictional," and did not expand further on its previous comments.

Young said the company awaits the end of the strike. "We look forward to having our employees back at work at a company that provides excellent wages, healthcare and retirement benefits," the Verizon spokesperson told Salon via email.

Nearly 40,000 Verizon workers went on strike in April. The two unions representing the company's workers, CWA and the International Brotherhood of Electrical Workers, say employees have worked without a contract since August.

The workers say they are challenging the corporation's attempts to offshore jobs to countries like the Philippines and Mexico and outsource work to low-wage non-union contractors. Verizon has roughly 40 percent fewer unionized U.S. workers now than it did a decade ago.

“Verizon is terrified that the public might find out about what has happened to the good middle-class jobs the company has shipped to the Philippines," said Dennis Trainor, president of CWA District One, in a statement.

"The truth is that Verizon is destroying middle-class American jobs so that it can pay workers $1.78 per hour and force them to work around the clock, rather than preserve good jobs in our communities," Trainor added

"That’s what our strike is about. Instead of profiting off of poverty abroad, Verizon should come back to the table and negotiate a fair contract that protects middle-class jobs."

Verizon has rejected other allegations made by the union. On April 14, CWA claims two striking workers were hit by the luxury sports car of one of the corporation’s attorneys. Verizon strongly denied that the incident took place, saying, "We have found zero evidence supporting these claims."

James A. Parrott, chief economist at the nonpartisan Fiscal Policy Institute, defended the strike in an article in Salon, arguing "Verizon’s version of the rules harm Americans both as workers and as consumers."

"Verizon seeks to hide behind vague claims that 'market forces' require it to degrade jobs and benefits and renege on commitments to invest in better service. But when Verizon says 'market forces,' it really means 'market power' — that is to say, the political and economic power they have to charge higher rates while not investing in service improvements," Parrott wrote.

The company's CEO, Lowell McAdam, reportedly will make $23.1 million in total compensation in 2016, a steady increase from $18.3 million in 2014. Presidential candidate Bernie Sanders has blasted Verizon for the enormous executive compensation, portraying it as a sign of corporate greed.

The Fiscal Policy Institute chief economist argues that the corporate telecommunications giant "would rather use its $1.5 billion a month in profits to enrich top executives or buy up other companies and further consolidate its market power."

"Telecommunications is the most concentrated industry in the United States and Verizon has a huge share of the national market and its monopoly profits," Parrott added. "Verizon has been tremendously enriched by the fruits of our nation’s technological leadership, and yet refuses to meaningfully invest in providing the high-speed broadband infrastructure and good jobs that American communities desperately need and seek."

(This article was updated with photos and video that the union delegation says it took in the Philippines.)