Zimmerman is yet again capitalizing on black lives not mattering, like every infamous American racist before him 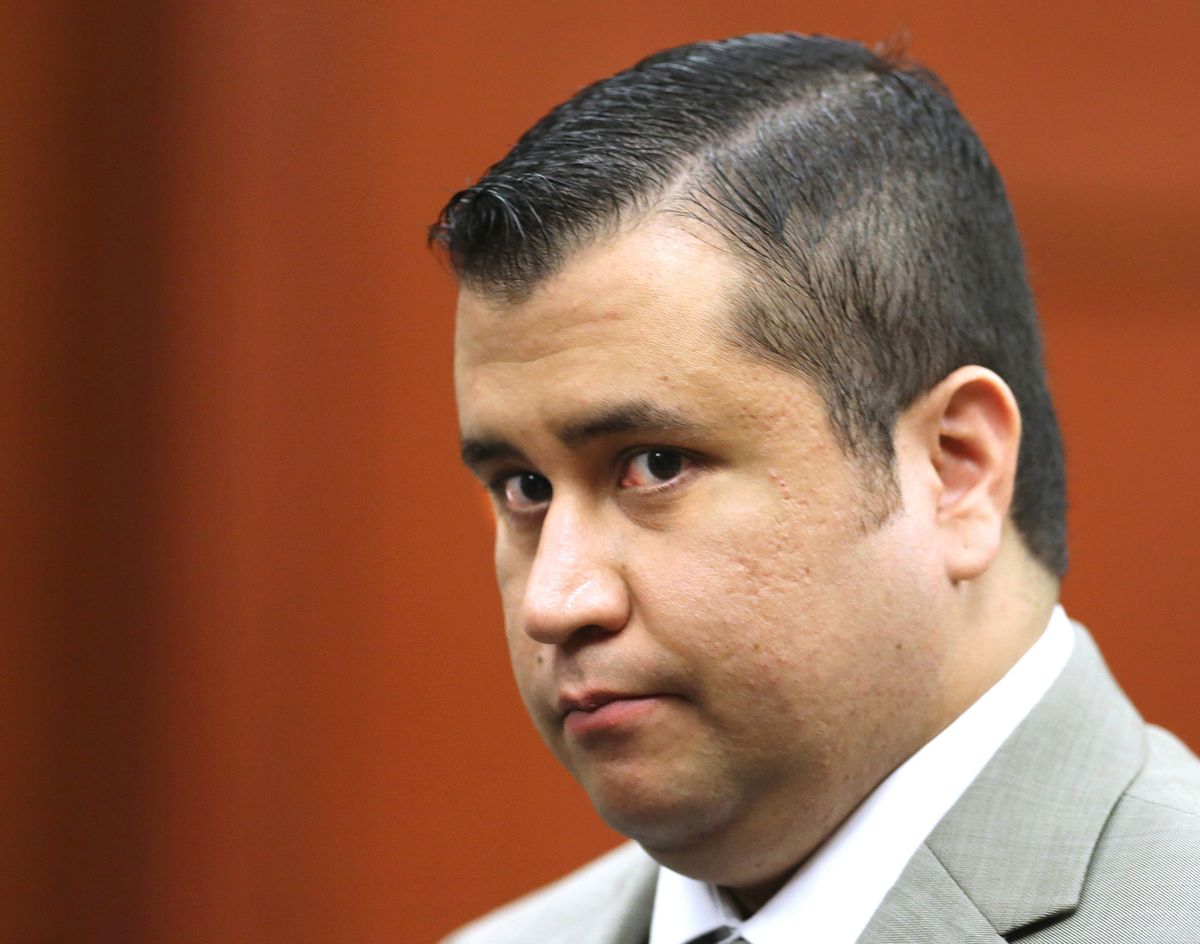 FILE - In this July 9, 2013, file photo, George Zimmerman leaves the courtroom for a lunch break his trial in Seminole Circuit Court, in Sanford, Fla. Police officers in Florida say Zimmerman has been involved in a shooting, Monday, May 11, 2015. Zimmerman was acquitted in 2013 of fatally shooting Trayvon Martin, an unarmed black teenager, in a case that sparked protests and national debate about race relations. (Joe Burbank/Orlando Sentinel via AP, Pool, File) (AP)
--

George Zimmerman is not dead. But he’s dead broke.

But of course Zimmerman did not make it about himself. That would go against everything it means to be a racist American. He claims to have a philanthropic purpose.

“I am proud to announce that a portion of the proceeds will be used to: fight [Black Lives Matter] violence against Law Enforcement officers, ensure the demise of Angela Correy's persecution career and Hillary Clintons anti-firearm rhetoric,” Zimmerman wrote in the product description on GunBroker.com.

Zimmerman probably has no plans to give the proceeds for the gun to anyone but himself. George Zimmerman cares only about George Zimmerman. He does not care about the Black Lives Movement nor the police movement against it. He has no problem riling up and exploiting all those Americans who do not care about Black lives just as his lawyers had no problem three years ago riling up and exploiting our racist ideas about dangerous Black teenagers that we need to stand our ground from.

We like to think that ignorance and hate drove George Zimmerman to claim self-defense in 2013, that ignorance and hate is driving him to claim he will donate some of the proceeds to fight the Black Lives Matter movement. In fact, George Zimmerman is hardly ignorant, and his decision to sell his gun to the highest racist bidder is hardly about hate. He was manipulating American racists then, and he’s manipulating American racists now. That is the history of racist ideas in a nutshell—mass manipulation for personal gain.

Until we realize that self-interest is driving the mind of George Zimmerman, until we realize that self-interest has been driving the history of American racism, we will neither understand Zimmerman nor American racism. In our outrage, we will merely call American racists ignorant and hateful. In our outrage, we will call Zimmerman all sorts of names, and then storm away in disgust. But in doing so, we will once again not see Zimmerman’s thoughtful marketing and defense of himself and his possessions: his gun now, his freedom before. Zimmerman is yet again capitalizing on Black lives not mattering, like every infamous American racist before him.

Ever since he was exonerated of second degree murder in 2013, he has been living off of the bounty of his close and extended family of Americans who have no regard for Black life. Two years ago, he claimed to have raised more than $300,000 from online donors. But much of that money probably went to his lawyers. He filed a lawsuit against NBC News over an edited 9-1-1 call, trying to cash in. But apparently that didn’t pan out. Remember last summer when he partnered with Florida Gun Supply to sell prints of his painting depicting a Confederate battle flag. His painting career was over before it began, kind of like his law enforcement career. And now, Zimmerman is marketing his product to all those Americans whose ideological ancestors a century ago kept purchasing at auctions and displaying in their homes all sorts of weapons used to lynch Black Americans. “Now is your opportunity to own a piece of American History,” Zimmerman advertised.

Zimmerman cares little about American history. He is probably still homeless and jobless. And so, when he received the package recently from the Department of Justice that contained the gun he used to kill Trayvon Martin, he almost certainly saw his latest hope out of poverty. He decided to sell off his most prized possession, hoping to score one last big payday. And someone will buy the gun. He sold Florida jurors a self-defense ploy in 2013 and they bought it. He sold the idea he was not a racist, and post-racial America bought it. He sold himself as a fearless champion of self-defense, of the second amendment, and so many gun-totters bought it. So someone will buy the twenty-first century’s gun of American racism.

Zimmerman has been a striving self-promoter to American bigots—a poor man’s version of Donald Trump. But after promoting and selling this gun, George Zimmerman will have nothing left to sell.