Team Taylor or Team Kanye?: "These rivalries become metaphors that people use to work out their beliefs"

Salon speaks to the author of "Your Favorite Band Is Killing Me" about Prince vs. Jacko, Beatles vs. Stones & more 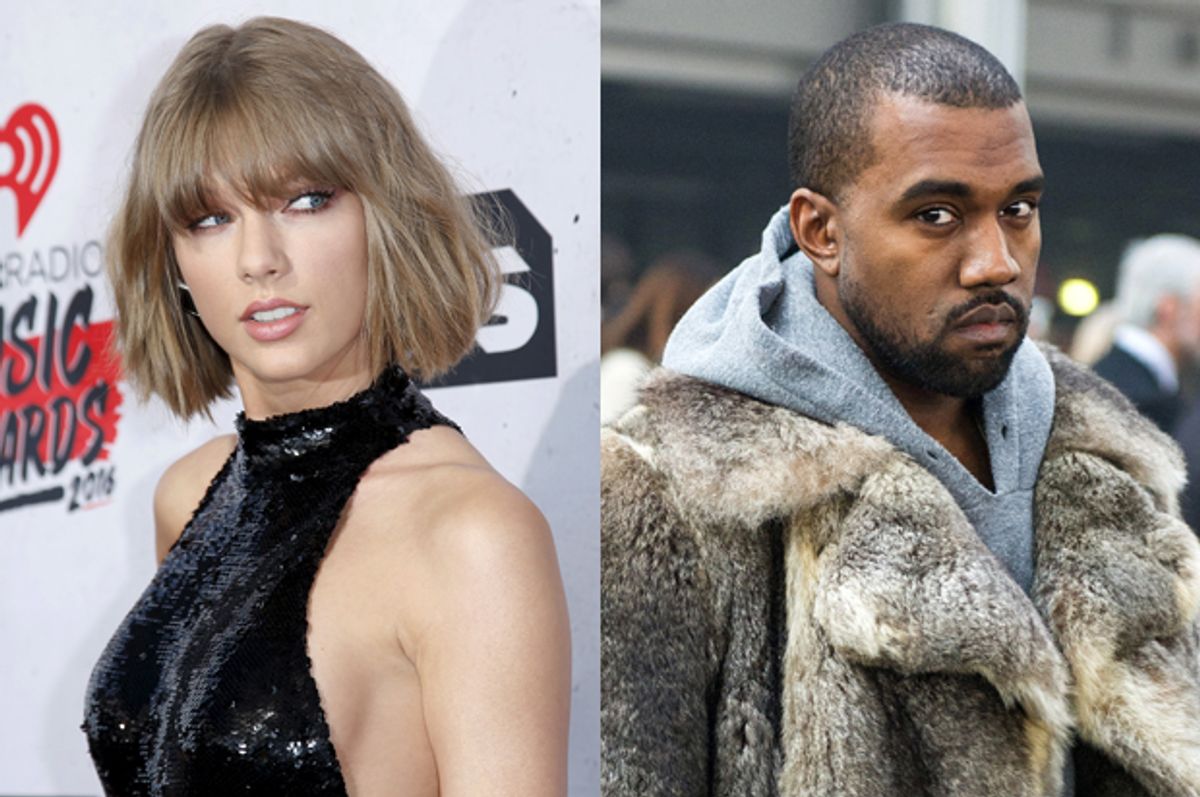 At least since the Beatles vs. the Stones, rock music history has been told through band rivalries. Rivalries thrived in BritPop (Blur vs. Oasis), indie rock (Smashing Pumpkins vs. Pavement), pop (Prince vs. Michael Jackson), turned violent in hip hop's East Coast vs. West Coast split, and became something hard to interpret in the case of Taylor Swift and Kanye West.

How real are these rivalries? What do they mean to the musicians themselves? And how do these oppositions help fans make sense of their lives and their values?

Journalist Steven Hyden digs into these questions with the new book “Your Favorite Band Is Killing Me.” Each chapter looks at a specific music rivalry with an enormous amount of humor, but tries to make some kind of sense of things by the time the section concludes. It ends up being a funny book that is also full of ideas – especially about how people relate to culture and how meaning changes as we age.

We spoke to Hyden from his home in Minneapolis. The interview has been lightly edited for clarity.

These rivalries, it turns out, don’t tell us all that much about the bands in question, and in some cases were not all that important to them. Is that fair to say?

Yeah – in the rivalries I write about in this book, the conflict comes from what the audience projects onto the artist. You can trace that back to the Beatles and the Stones – the biggest, most archetypal rivalry in pop history. The reality is that there was not much animus – they were friends for the most part. But in the minds of millions of people, they represent opposites, so it has a larger significance. In a way, choosing one side is supposed to say something about who you were as a person.

And in that case, the Beatles were supposed to be a lovable pop band, and the Stones were these dangerous, rough dudes, right?

Right. I didn’t realize this at the time, but I realize now that a lot of the rivalries have the same dynamic: You have a very successful mainstream artist, and then you have someone reacting to that artist. Either because they’re conscious of it, or because the audience demands a reaction. The Stones are counter-programming for the Beatles. But you could say the same thing about Taylor Swift and Kanye West, or Nirvana and Pearl Jam. It’s a pretty common dynamic – something becomes so big that it becomes ubiquitous, and some people find it oppressive.

You write this book in a very analytic way. But was there a time where you were emotionally committed to some of these fights?

Yes – the Oasis vs. Blur rivalry. That was a very emotional thing for me when I was 16 years old. That’s when this took hold – the idea that you could love one band and hate the other. And the reason you loved the band you did was because it was everything you wanted to be. And the other band was everything you didn't want to be. As a kid, that’s a very primal thing – you’re trying to figure out who you are. And you do that by defining yourself as what you’re not – using pop culture to draw lines in the sand.

That was so ingrained into me that even to this day I have a hard time listening to Blur. It’s silly to think you can’t listen to both bands, but it was so visceral to me.

Let’s talk about one of these. How serious was the Prince vs. Michael Jackson rivalry, and how did it work itself out?

That’s another example of a huge mainstream pop star against an upstart of sorts. It’s a little strange to think of Prince being an upstart, but Michael Jackson, entering the ’80s, had been a pop star for most of his life and was well established in the mainstream. Prince was a guy from the Midwest, hailing from a town that wasn’t nationally known for its music scene, and was actually a self-made man – playing all the instruments and doing everything himself. That sort of sets the table for that.

They were on the same playing field when Prince put out “Purple Rain,” but he always seemed to be the guy from the fringes. Michael Jackson was very commercially driven – he puts out “Thriller,” the biggest album of all time, and then with “Bad,” his goal was to sell 100 million records. Prince put out “Purple Rain,” and it’s a huge hit. He went on to put other hits after that, but it’s a much more idiosyncratic path: He seems to be following his muse more.

Now that Prince has died, people forget that there were times in the ’80s where he did things that stigmatized him.

And not just among “squares,” you mean.

Exactly. An example I write about in the book is “We Are the World” – an enormous charity project. Michael Jackson helped spearhead that, and Prince was one of the only big pop superstars who didn’t appear. He was criticized so much that “SNL” produced a parody called “I Am the World,” where Billy Crystal donned blackface to impersonate Prince. It gives you a sense of how much times have changed – Billy Crystal in blackface was less offensive than Prince not doing “We Are the World.”

They’re all complex and interesting in various ways. But Kanye West and Taylor Swift is one of the strangest, partly because they don’t sound the same at all; they’re not even in the same genre. What happened, and what did it symbolize?

When I wrote that chapter, it appeared as if that rivalry was petering out. It started in 2009, as Kanye bum-rushed the stage as Taylor was accepting an award at the VMAs, and Kayne was excoriated for that. It was very one-sided when it happened, it was very negative on Kanye. For Taylor Swift, while she was a huge star in country music, she was just starting to cross over into pop. So while I don’t think Kanye made her a celebrity, that incident did help her; it just presented her as a very sympathetic character.

The years go on, they reconcile, there’s even talk of a collaboration. And then Kanye puts out “The Life of Pablo,” with that song where he says he could still have sex with Taylor Swift, and where he says he made her famous. It just reignites that whole thing.

They’re both huge stars, and now Taylor Swift is the epitome of mainstream pop. And Kanye West has fashioned himself as someone who’s famous, but who’s not going to play by the pop-music rules; he’s more like David Bowie. With Kanye it’s always hard to know out how much of it is premeditated; he seems like a very impulsive guy, but I have to feel at some level that he recognizes the power of Taylor Swift as a symbol, and if he talked about her in a song, it would instantly trigger a firestorm and help him.

And it’s ultimately better for both of them if they don’t get along than if they are reconciled. It’s more interesting when they are feuding – it helps Taylor Swift’s brand as a strong, independent woman doing battle with the music industry. And attacking Taylor Swift bolsters Kanye West’s bona fides – there’s something dangerous about what he does. Which he does need, frankly, since he’s pushing 40.

It’s hard to tell in a lot of these rivalries how much is sincere and how much of it is designed to generate press and media attention.

Yes – but it ultimately doesn’t matter. Like with the Beatles and the Stones: Even if they actually were friends, the fact is, in people’s minds, this exists. Which means that it matters. These rivalries become metaphors that people use to work out their beliefs. They might be aesthetic preferences, political affiliations, philosophical ways of looking at the world.

People project certain qualities on artists, and they endorse them because they want to associate themselves with a certain value system. I feel like it’s been accelerated in the social-media age. When you’re on Facebook or Twitter, talking about Taylor Swift or Kanye or Beyoncé is shorthand for the kind of person you want other people to see you as. Or if Coldplay is on the Super Bowl and you criticize them, there’s a performative aspect – you want people to know that you are against a certain kind of pop-culture construct: Whatever Coldplay are about, you’re against it, and you want other people to know that.

That’s something that starts when you’re young. And I think people assume you grow out of it. But it continues well into adulthood.