This is the dumbest Donald Trump theory yet: It's all about John Roberts

The right-wing blogosphere has a new theory -- it's wacky, implausible and simply wrong 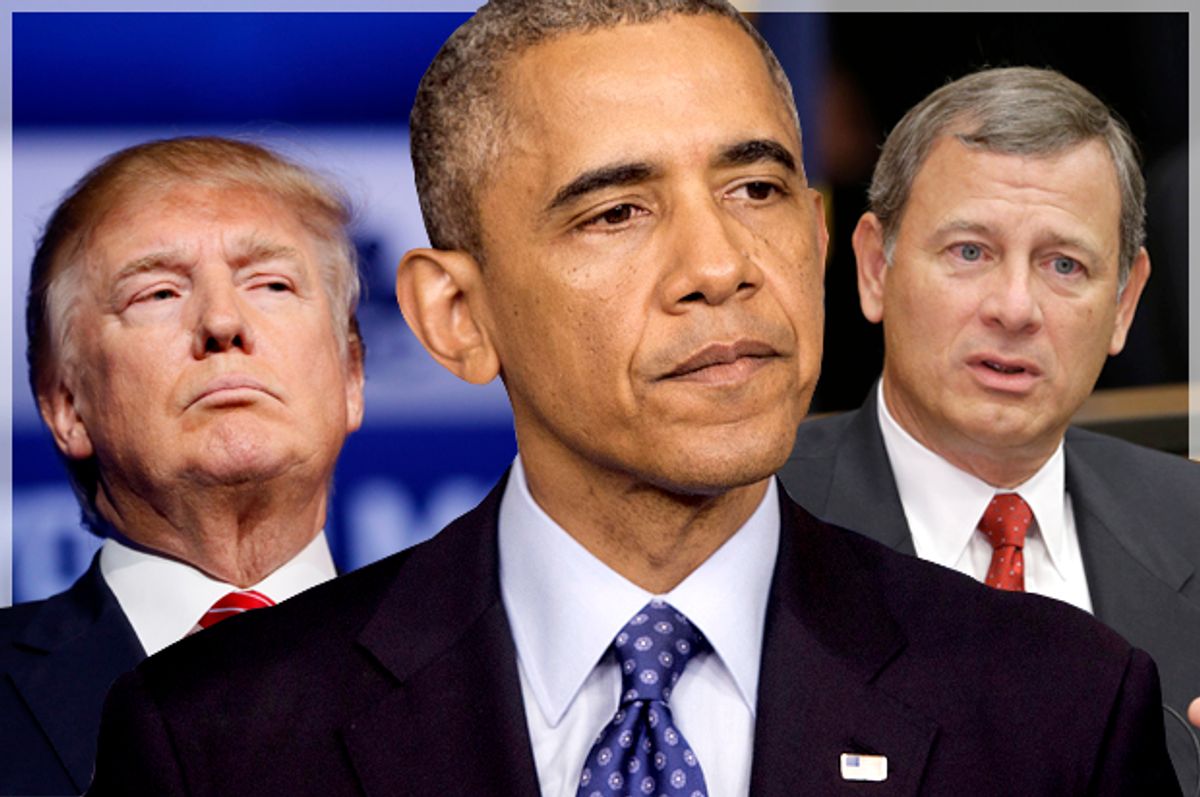 What explains the rise of Donald Trump? The right-wing blogosphere has a theory: Trump’s success in taking over the Republican party was caused by Chief Justice John Roberts’ contempt for the rule of law.

The argument, put forth in slightly different forms in recent days by Georgetown law professor Randy Barnett and Cato Institute scholar Ilya Shapiro, goes like this:

Roberts knew that the Affordable Care Act, aka Obamacare, was unconstitutional. He even said so in his majority opinion in NFIB v. Sebelius, the case that upheld Obamacare, with Roberts casting the decisive vote. But, after declaring that Obamacare violated the Commerce Clause, Roberts invented a different constitutional argument under the taxing power to save the law, even though he knew that argument was wrong.

He did this because Roberts doesn’t believe judges should overturn laws enacted by political majorities, even when those laws violate the Constitution. Roberts in effect told conservative voters to go elect their own Constitution-trashing strongman, instead of asking courts to restrain tyrants such as Obama and Trump.

But at the very moment he was called upon to teach the American people of the value of their republican Constitution, Chief Justice Roberts asserted the judicial restraint of the democratic constitution and turned them away. And that, my friends, was the end of our constitutional moment. That was the beginning of the end of constitutional conservatism as a political movement. And it kindled the resentment and populism that led to Donald Trump.

Roberts essentially told would-be Trumpistas not to bother the courts with important issues, that if you want to beat Obama you have to get your own strongman—complete with pen, phone, and contempt for the Constitution . . . Constitutional conservatism simply couldn’t survive judicial conservatism. The genteel Roberts and the vulgar Trump thus have one thing in common: a belief that judges should stop striking down laws and just let political majorities rule, individual liberty be damned.

These claims are, to put it politely, implausible. To put it less politely, they represent a set of beliefs that bear no discernable relationship to reality. Indeed, they bear a striking resemblance to the sorts of rantings one encounters from members of especially unhinged cult groups.

First, that Obamacare violates the Constitution, and that John Roberts knows this, but he’s pretending it doesn’t because he doesn’t believe that courts should overturn law enacted by political majorities.

The vast majority of constitutional law scholars don’t believe Obamacare violates the Constitution, but never mind that. The far loopier claim is that John Roberts, of all people, upheld Obamacare because he doesn’t believe in striking down democratically-enacted laws. This is the same Roberts who provided the deciding vote to gut the Voting Rights Act, to overturn decades-worth of campaign finance laws, and to strike down gun control legislation, to name just a few of the many cases in which Roberts has shown no hesitation to overturn the decisions of political majorities.

Second, that Donald Trump’s political success has been caused in large part by voter outrage regarding Roberts’ unwillingness to enforce the Constitution against political majorities.

Leave aside that this supposed unwillingness is, as noted above, completely fictitious. How delusional do you have to be to believe that a significant number of the people voting for Donald Trump are doing so because they are upset about the theory of judicial review John Roberts employed in the Obamacare case? This is such an obviously preposterous idea that to restate it is to refute it.

The American right has been throwing a six-year-long temper tantrum about the passage of Obamacare. It’s hardly surprising that part of the right’s strategy for attacking the law has been to cook up a bunch of “creative,” i.e., dubious, legal arguments about how the law is supposedly unconstitutional. That, after all, is how the legal-political game is played in this country.

Do people like Barnett and Shapiro actually believe their claims that a series of highly technical (and again, highly dubious) legal arguments failed to overturn that law because John Roberts values democracy more than a correct interpretation of the Constitution? Furthermore, do they really believe that widespread anger about this supposed preference is what has led to Donald Trump’s impending nomination?

Because if they do, that’s actually crazier than Trump’s nomination itself.