This isn't how a democracy should work: How the media boosted Donald Trump and screwed Bernie Sanders

Voters want change. Elites in D.C. and the media -- both liberal and conservative -- are actively obstructing it 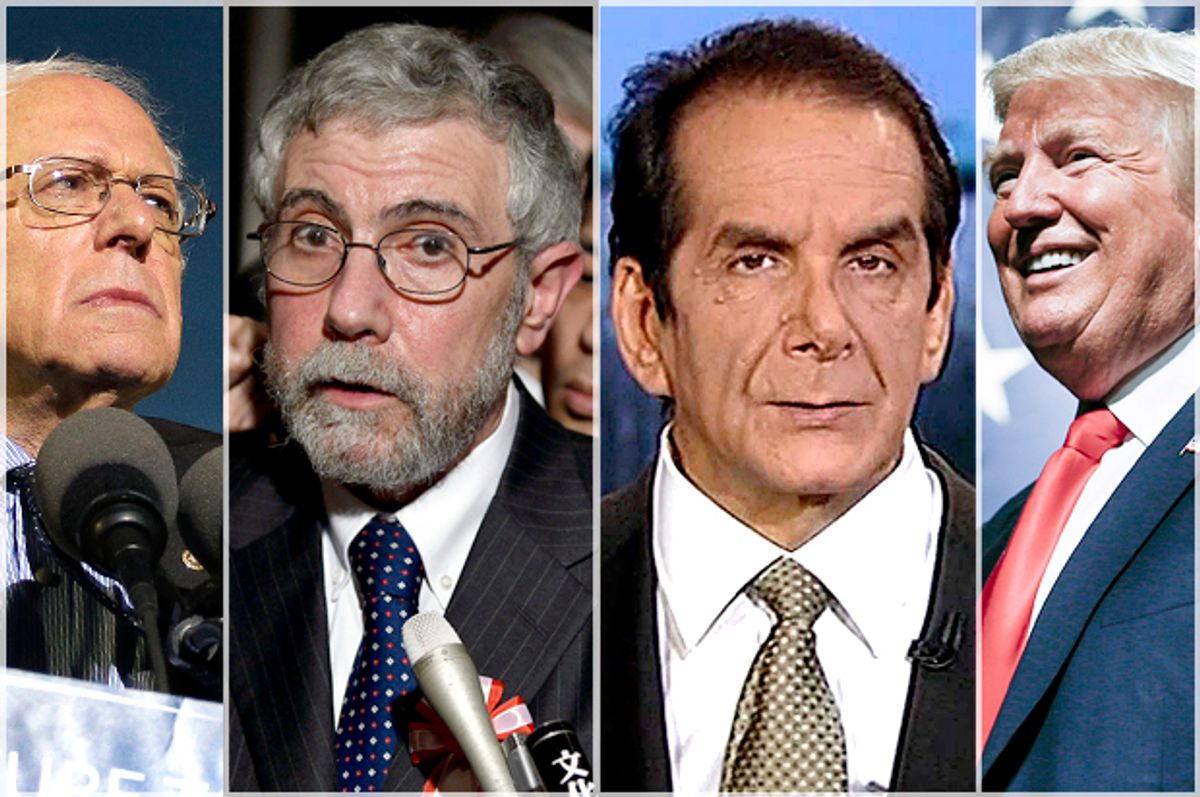 As this wildly unpredictable primary season heads toward the finish line, the two frontrunners are widely seen as their respective party nominees. Given that presidential elections are typically glorified as proof of our democracy at work, it seems appropriate to ask what kind of democracy has been revealed by this year’s primary season.

In his book "Democracy, Inc.," the late, distinguished political scientist Sheldon Wolin has argued that we have a “managed democracy,” that elite “management” of elections is the key to perpetuating the “primal myth” that the people determine the rulers. As Wolin put it, this “antidemocracy” doesn’t attack the idea of government by the people, it encourages “civic demobilization” – conditioning the electorate to be aroused for a brief spell, controlling its attention span, and then encouraging distraction or apathy.

Obviously the mass media play a central role in the managed democracy. How, exactly, has this played out in this, the “year of the outsider,” when, according to a Quinnipiac University poll, almost two-thirds of voters in both political parties agreed with the statement that “The old way of doing things no longer works and we need radical change.”

Our news media, television in particular, work at two levels simultaneously. One level is cultural. This is where market-driven news accentuates its entertainment value, seeking to maximize audience or readership by grabbing attention with all the devices common to entertainment. News stories are brief, dramatic fragments; they accentuate eye-catching imagery, conflict, and personalities. They play on our emotions, but tell us almost nothing about why the world is the way it is.

The other level is ideological, or political.  This is where the mass media are corporate institutions that reflect the consensual and competing views of elites who dominate our politics.  This is where Democrats and Republicans "debate" political issues, where they tell us how to interpret the world.  It is definitely not where more fundamentally critical, or outsider, views are taken seriously.

So, how do we account for the success of an “outsider” like Donald Trump, or the surprising level of success by the outsider Bernie Sanders?

Trump has been wildly successful because he is the latest effective practitioner of cultural politics; in fact, as a veteran of reality TV, he’s made for that medium’s entertainment pitch. As CBS CEO Leslie Moonves put it back in February, “it may not be good for America, but it’s damn good for CBS....  [B]ring it on, Donald, go ahead, keep going.” Moonves’ critique of Trump as not “good for America” reflects the elite, ideological side of mass media; his “good for CBS” reflects the financially driven cultural side.

This is nothing new. For decades, going back to another supreme practitioner of cultural politics, Ronald Reagan, the right side of the elite has moved into a dominant political position by sounding unconventional, like they are on the side of millions of Americans who have long felt that their place in society and the economy is being marginalized. The right consistently trots out scapegoats – “liberals,” protesters, “welfare cheats,” immigrants, Muslims, etc. – to “explain” why this audience’s fortunes are declining.

This is the faux populism that the right has mastered in its ride to power. It’s also the faux populism of advertisers when they suggest they’re on our side as we try to make our lives better. But neither one is on the side of the people. They’re all on the side of corporate America. Despite his conservative rhetoric, Ronald Reagan arguably did more than any other president to accelerate the decline of family-supporting jobs and manufacturing communities than anyone else. Similarly, with the Trump campaign, building a wall between the U.S. and Mexico won’t improve the livelihood of American citizens one iota. But it feels that way to significant numbers of Americans.

The Clinton campaign also benefits from the cultural politics of symbolism. As a woman and the spouse of the “first black president,” as Bill Clinton has been called, her candidacy pulls on the emotional identification of older women and African-Americans. Arguably, this pull has put her in the lead for the nomination.

The cultural side of news media is essentially a con job that encourages our “civic demobilization.”

While the ideological side of the news media breaks into a sweat at the thought of a Trump nomination, their managing role is equally transparent in the Hillary Clinton-Bernie Sanders race. Hillary Clinton is Ms. Insider.  Bernie Sanders is an authentic outsider; he has for years told anyone who would listen that our system is broken.  He has both faithfully represented and empowered the people of Vermont by telling them the truth

Not surprisingly, the Democratic Party establishment embraced Hillary Clinton from the start; she plays the same big-money, managed democracy game they play. Nor is it surprising that the national news media have also embraced her candidacy while dismissing the “unrealistic” campaign of the “unelectable” Bernie Sanders – though he does keep surprising them.

Nowhere is this more transparent than in the New York Times – the agenda-setting paper of record that is required reading for television newscasters and talk show hosts. The Times editorially endorsed Clinton for the nomination back in January, before the Iowa Caucuses, hyping her as the “most broadly and deeply qualified presidential candidate in modern history.” Again and again, Times columnists – especially “liberals” like Paul Krugman, Nicholas Kristof, and Charles Blow – have belittled Sanders and his progressive policy recommendations, preferring instead the alleged “realism” that "liberals" like Hillary Clinton offer.

Along with other national newspapers, the Times has also been quick to bury Sanders. As Blow put it on April 29, Sanders is the “figurehead of a living idea and a zombie campaign…. He has gone from leading a revolution to leading a wake.”

Or as op-ed columnist Michael Lind brazenly put it on April 16, “Clintonism” represents the wave of the future for the Democrats. The Times columnists obviously can’t see past the boundaries of its insider perspective. If anything, Hillary Clinton is the wave of the past.

Young people, on the other hand, flock to Sanders’ campaign because they hear in it an authentic, critical voice that expresses their deep concern about their vulnerability in a future of continued grotesque inequality, ecological catastrophe and endless war. For them, business as usual has no appeal because they recognize that that’s what got us into this mess in the first place

If only others who have been marginalized in our society would recognize the authentic representation of their best interests reflected in the Sanders campaign, instead of succumbing to the emotion of cultural politics, we might begin to have a genuine and powerful populist movement in this country. As Sheldon Wolin put it, real democracy is “about the conditions that make it possible for ordinary people to better their lives by becoming political beings and by making power responsive to their hopes and needs.”