Yes, my sexuality is a choice: Why I reject the "born this way" narrative 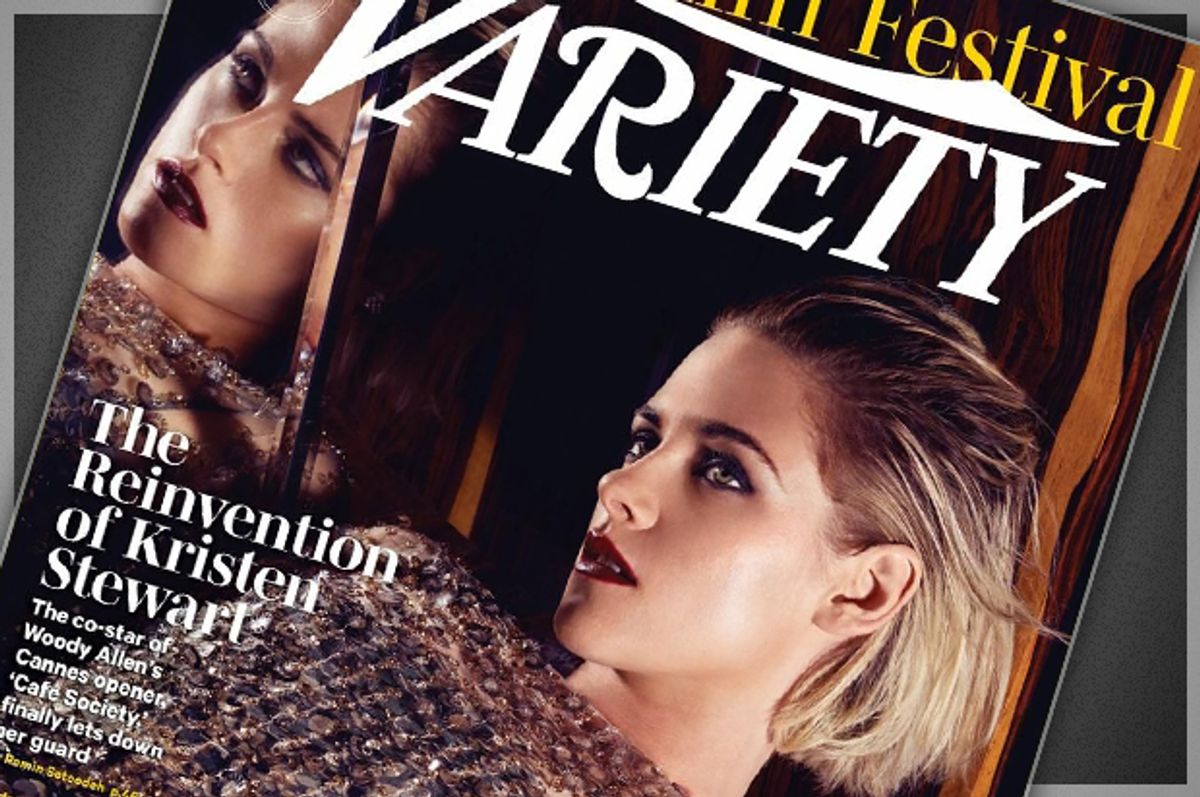 American culture is beginning to experience the ethical turn in how it understands sexuality. It was only four years ago when Cynthia Nixon was lambasted for claiming her sexuality was a choice. Today, however, more people than ever—including countless young celebrities like Kristen Stewart, Miley Cyrus, St. Vincent, and Amandla Stenberg—are refusing to pick a label when it comes to their sexuality. Refusing a label is a choice. The progressive move away from identity categories negates the need for the normative, “born this way” narrative that has been used to socially validate them. As Stewart said in a recent Variety interview,

“You don’t have to immediately know how to define yourself. . . Me not defining it right now is the whole basis of what I’m about,” she added with idiosyncratic unflappability. “If you don’t get it, I don’t have time for you.”

Adults choose who to have sex with, how to have sex, where they have sex, and the frequency with which they have sex. Libidinal desires may exist beyond our control, but we do very much have control how we act upon those desires externally in the world with other people. To put it personally: “I just don’t fall into a vagina and stay there,” is how I jokingly explain my belief that sexuality is a choice. I am drawn to women and will happily talk about scissoring and other exquisite lesbian stereotypes, for sure, but there’s not an inescapable magnetism forcing me to leech onto women.

This position flies in the face of the accepted narrative within gay circles that have adopted the phrase “born this way” for social justice and moral justification, as well as for political expediency. (Although, according to the most recent PEW Research data from 2013, I am one among the 42 percent who believe “being gay or lesbian is ‘just the way some choose to live,’” as opposed to 41 percent of those surveyed who subscribe to the “born this way” argument.) I am an atheist and harbor no religious ascetic values like shame or guilt about who I have sex with or how I have sex. In terms of American politics, because our rights and laws are predicated on socially sanctioned identities, sexuality has been conceived as an ontological trait or biological certainty. Take the relevant example of the Defense of Marriage Act (DOMA). This federal law targeted a specific group of people. Consequently, we have had to work within America’s paradigm of identity politics to prove we are collectively oppressed in order to obtain equal rights.

Despite the necessity of identity politics in procuring equal rights, I understand sexuality to be a choice through feminism. With roots in materialist, ethical and existentialist philosophies, my feminism draws from Nietzsche, Kant, Sartre and Foucault; Beauvoir, Audre Lorde, and Barbara Johnson. For existentialists like Sartre and Beauvoir, humans are free through making choices and, more importantly, through taking responsibility for those choices. “There is no trace-out path to lead man to his salvation; he must constantly invent his own path,” Sartre said in an interview in 1945. “But, to invent it, he is free, responsible, without excuse, and every hope lies within him.”

Life demands making a series of choices—not among an infinite panoply of options, but among those options determined by our socio-economic conditions. Societal constraints on women’s “sexual vocation,” as Beauvoir refers to it in "The Second Sex," challenge their freedom. Yet, she acknowledges women’s sexual vocation is possible if she “commit[s] herself with the same decisiveness” as men do in their sexual exploits.

Beauvoir was arguably the originator of the idea that sexual liberation was integral to ending women’s oppression. In "The Second Sex," she writes that “freedom is recognized in woman’s sexual activity.” It is through a woman’s sexual vocation that she can attain autonomy—that she can become an independent woman.

Feminism also influenced my sexuality through the interrogation of heterosexuality as a patriarchal institution. Adrienne Rich was just one of many lesbian radical feminists to decry heterosexuality as fundamental to women’s oppression. “Compulsory heterosexuality,” she contends, is not natural or a biological certainty, but rather a social construct that allows men to control women’s sexuality. Her ideas cohere with those of French lesbian feminist Monique Wittig, who, in her seminal essay “One Is Not Born a Woman,” unpacks the fallacy that heterosexuality is natural, or normal. Cultural anthropologist Gayle Rubin argues similarly in her essay “Thinking Sex,” maintaing not only that sexuality is a product of society, but that desires, even, are “constituted in the course of historically specific social practices.”

The history of heterosexuality has produced the “born this way” narrative as a consequence of situating homosexuality as deviant. Because of psychoanalysis, because of the medical institution and the subsequent policing of bodies, “the homosexual [became] a species,” to quote Foucault. Sexuality is the institutionalization of sex acts.  The homosexual is a modern invention—technically, as an identity is was created before the heterosexual. Some rationale had to be given for this deviancy, and what better way than to locate homosexuality in nature, in biology, as something God created? The justification in nature mimics that of heterosexuality. Yet, if sexuality is socially constructed and expressed through culture, then there is no norm, nor is there deviance.

Framed within recent feminist debate, this view is akin to what many call (some do so derisively) “choice feminism.” But my understanding of “choice” is not about abundance, but discrimination. To make a choice—to have sex with someone or to identify with a specific sexual orientation—entails judgement. By saying that my sexuality is a choice, I hold myself accountable for all my actions. And to make oneself accountable to both one’s self and to others in the world is, I think, the optimal form of a civic-minded ethos.

Claiming ownership of my sexuality holds me accountable for my actions—accountability is freedom. Accountability is power. It is empowering to take possession of my identity and my acts. Women break the cycle of oppression through their sexual liberation. Our power manifests through our freedom to make choices and to take responsibility for those choices. And that includes sexuality.