According to Ben Carson, Palin is on a short list of names Trump is considering for running mate. Be very afraid 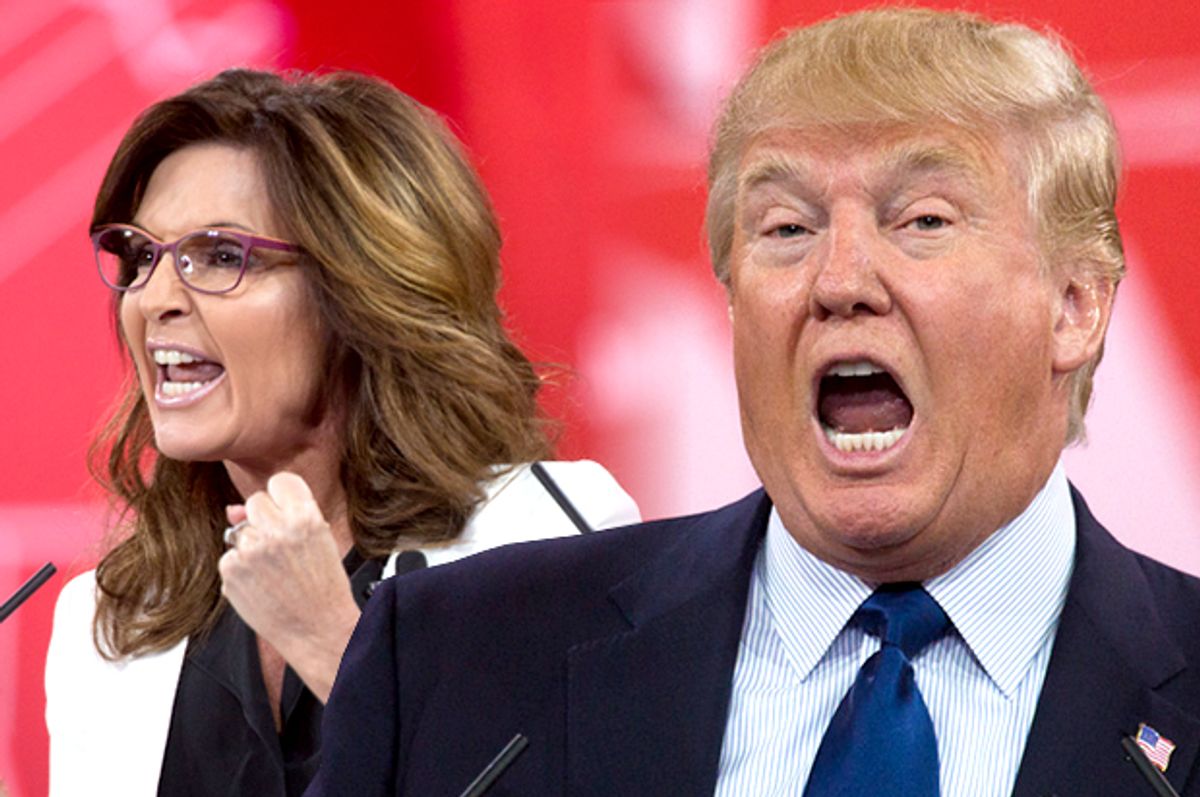 Back in 2008, when she was John McCain's game-changing nominee for vice president, Sarah Palin sat for an interview with Fox News Channel's Carl Cameron who gently pressed the Alaska governor for clarification on an answer she had given during her first and only debate against Joe Biden the night before. See, Palin had almost entirely flummoxed a simple question about the constitutional role of the vice president. Here was Palin's response during the debate:

"Well, our founding fathers were very wise there in allowing through the Constitution much flexibility there in the office of the vice president. And we will do what is best for the American people in tapping into that position and ushering in an agenda that is supportive and cooperative with the president’s agenda in that position. Yeah, so I do agree with him that we have a lot of flexibility in there, and we’ll do what we have to do to administer very appropriately the plans that are needed for this nation."

She couldn't accurately describe the job for which she was running; a job that'd place her a heartbeat away from the presidency, with the candidate at the top of the ticket having suffered through a series of cancer procedures. The next day, when Palin was asked to explain her answer -- again, on Fox News no less -- this how the exchange with Carl Cameron went:

CAMERON: One of the things you talked about last night was the flexibility the vice president has.

CAMERON: Uh. What did you mean by that?

PALIN: Uh. That thankfully our founders were wise enough to say we have this position and it's constitutional -- vice president will be able to be not only the position flexible, but it's gonna be those other duties as assigned by the president. A simple thing.

The answer she gave the next day was worse, even though she had 12 hours or so to brush up. I'll grant her this: That last chunk of her answer -- "a simple thing" -- was actually correct. In fact, according to the Constitution, the role of the vice president is an extraordinarily simple thing. Which, consequently, makes it unbelievably difficult to butcher. Like Sarah Palin did. Multiple times. But in this instance, she couldn’t even form actual sentences using words that line up to compose a coherent thought. (In fact, I would love to see the sentence diagram for "vice president will be able to be not only the position flexible.")

By the way, the above examples weren't the only times she flummoxed her answer on this topic. Another time, she screwed up the answer when asked by a second grader:

"Aw, that's something that Piper would ask me, as a second grader, also. That's a great question, Brandon, and a vice president has a really great job, because not only are they there to support the President agenda, they're like a team member, the teammate to that President. But also, they're in charge of the United States Senate, so if they want to they can really get in there with the Senators and make a lot of good policy changes that will make life better for Brandon and his family and his classroom. And it's a great job and I look forward to having that job." [Emphasis added]

The vice president isn't "in charge of" the Senate. Not in any way. (Incidentally, we included all three quotes to prove that her debate answer wasn't a one-off gaffe. She clearly didn't know, nor was she interested in learning the correct answer.)

Her insufferable dumbness on such "a simple thing" (again, her words) would be almost entirely forgettable today were it not for the fact that she's apparently been named on a short list for Donald Trump's running mate. We know this because Trump's somnambulant lackey, Dr. Ben Carson, spilled the beans over the weekend, according to The Washington Post.

Apparently, Carson and his wife were on their way to a television interview when they were asked about the short-list for the vice presidential spot. After all, Carson was temporarily appointed by Trump to evaluate potential running mates. So, then, Carson was asked about a new poll showing his own name as the favorite among a series of candidates for the number two spot.

In other words, Sarah Palin is a finalist for the spot, along with Kasich, Christie and two candidates for whom Trump invented awesomely clever nicknames, "Lyin'" Ted and "Little" Marco. (Trump claims to have "the best words.") Despite the fact that Trump relentlessly tried to bully Rubio and Cruz, it's probably a given that they can accurately describe the constitutional and traditional role of the vice president. Palin, perhaps to this day, can't.

For the sake of brevity, we'll skim right on past the fact that Trump appears to be assembling a rogues gallery of names rather than a team of competent surrogates and advisers: Carson as vice presidential headhunter. Christie as transition czar. Giuliani as chief Muslim basher. Then there's Putin ally Paul Manafort. It's not unlike the casting for "Celebrity Apprentice" -- grab up the names who will bring the biggest ratings rather than lesser names who are, you know, competent. Palin seems to fit perfectly into Trump's plan for the November sweeps.

With Palin as a potential vice president, Trump clearly plans to continue trolling his political enemies in lieu of illustrating how he'd assemble a staff of domestic and foreign policy wizards to compensate for his obvious lack of knowledge and experience. Trump supporters will tell us that we should ignore his hateful and too-often moronic rhetoric because, they say, he'll bring in people who'll know what they're doing. So far, he's failing badly on that front. Even while pivoting to the general election, Trump has spectacularly botched crucial policy-based remarks, revealing both his incompetence and the incompetence of the people who surround him.

For example, throughout the last eight years, the GOP has been screeching about the national debt. (The budget deficit, meanwhile, has dropped by a record trillion dollars -- thanks, Obama!) Consequently, the debt is perhaps the most important issue on the minds of Republican voters. And Trump, while addressing the matter, showed that he knows exactly zero about how the debt works. He laughably argued that he'd negotiate deals with our creditors, not realizing that he'd be defrauding U.S. bond holders.

Michael Strain, from the conservative American Enterprise Institute said of Trump's debt plan, "Mr. Trump doesn't have a coherent idea of what he's talking about." He added, "This is the bond market equivalent of 'we're going to build a wall and have Mexico pay for it.'"

Trump should probably hire someone like Strain, if he has to hire a conservative in the first place, to advise him on the economy. Or anyone, for that matter, who's ever bothered to crack open a book on the debt. Instead, he hired another rogues-gallery name: CNBC's Larry Kudlow. Yes, the pundit who, in October, 2007, declared the housing market to be unbreakable:

"Housing woes will take a percent off GDP for the next several quarters, leaving about 2 percent growth and 2 percent inflation. It is the quintessential Goldilocks soft landing scenario."

A year later, the economy crashed, only to be rescued by President Obama's stimulus legislation.

And now, Trump is considering Palin to, yet again, step into a job that she failed to accurately describe even though she was given innumerable occasions in which to do so. It'd be the classic scenario of the blind leading the blind. A know-nothing circus clown and a mush-mouthed reality-show star. (By the way, those descriptions are interchangeable. Good luck guessing who's who.)

The good news is, of course, the comedy. But we should be looking at this election as nothing more than a 50/50 proposition, with the very real possibility that Trump will win. Along those lines, Democrats ought to ignore early polls showing Hillary leading in the electoral college with a comfortable margin. The GOP is only now beginning to coalesce around their nominee. And, more importantly, we should never, ever underestimate the nearsightedness of the American voter. Roughly 50 million of them will likely vote for the Trump ticket, especially if Palin's name is attached.