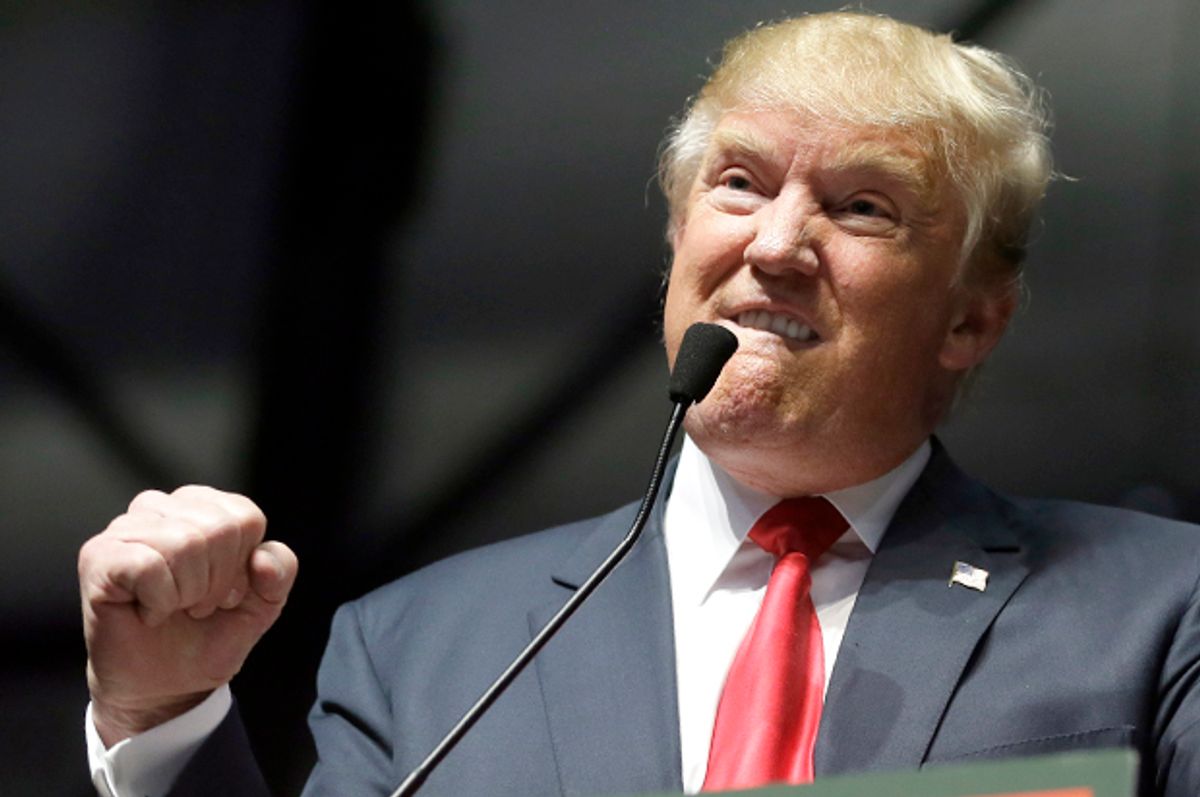 Last week we learned that presumptive Republican presidential nominee Donald Trump’s thoroughly insane tax plan was getting a facelift from two of the most prominent figures in supply-side economics: Stephen Moore and Larry Kudlow. It wasn’t immediately clear how Moore and Kudlow would alter the plan, nor was it evident that Trump would accept whatever changes they proposed. Regardless, Moore has apparently signed up to do some pinch-hit PR work in favor of the ever-evolving Trump tax vision. He’s written an op-ed for the Washington Times insisting that just because Trump’s plan calls for massive tax cuts for the rich, that doesn’t mean it favors the rich:

Hillary Clinton took another sniper shot at Donald Trump’s tax reform plan last week by calling it “a tax cut for billionaires” like him. She even argued that Mr. Trump “spends” trillions of dollars on the tax cuts. Question: How do you spend money on a tax cut?

As Ronald Reagan would say: “well, there they go again.” Tax cuts for the rich is the boilerplate attack line against tax rate reductions. We’ve heard this every time a tax cut has been floated for the last 30 years.

Since this is apparently a point of contention, let’s clear things up: Donald Trump’s tax plan is an extraordinarily great deal for rich people. This is not a controversial statement; it is a readily observed and easily documented feature of the reality most of us inhabit. The Tax Policy Center estimated that under Trump’s plan, “households at all income levels would receive tax cuts, but the highest-income households would receive the largest cuts, both in dollars and as a percentage of income.” Broken down by income, the bottom quintile would receive an average tax cut of $128, while top 1 percent of filers would be looking at a $275,000 cut, and the top 0.1 percent would receive a $1.3 million cut. The wealthier you are, the better you make out under Trump’s tax plan as it currently exists.

But this criticism isn’t even close to historically accurate. Many times tax rate cuts — including in the 1960s under John F. Kennedy and in the 1980s under Mr. Reagan — have raised tax revenues from the wealthiest tax filers because lower rates reduce incentives for tax avoidance and recharge the batteries of the economy and grow taxable incomes.

Ah yes! The ol’ “tax cuts pay for themselves” saw that we’ve been hearing from the supply-side crowd for going over three decades now. Every time a high-profile Republican comes out with a tax plan that includes steep rate cuts for the wealthy, we’re told that they won’t exacerbate deficits because they’ll supercharge the economy and actually boost revenues. There’s a large, growing, and cross-ideological consensus that this is not actually true.

But who cares! This is Donald Trump we’re talking about. And when Donald Trump says he can put in place one of the biggest tax cuts the world has ever known and also balance the budget, he is of course telling the honest truth. Moore argues that it is “wrong” to say Trump has no way to pay for his extravagant tax cuts because Trump “has an aggressive government downsizing plan” that involves repealing Obamacare and cutting federal spending across the board (except for Social Security).

It doesn’t actually matter how “aggressive” his spending cuts are because Trump’s plan appears to use some sort of alternative budgetary mathematics that is currently unknown to the observable universe. “America's defense budget — which funds the Army, Navy, Air Force, etc. — costs a little more than $6 trillion,” Vox’s Ezra Klein and Jeff Stein wrote earlier this year. “In other words, you could completely dissolve the entire American military and still only be two-thirds of the way to Donald Trump's proposed tax cut.”

How does Moore balance this ledger? He assumes that the economy will grow at an impossibly high sustained rate and brushes off skeptics as being overly negative. “With the right policy incentives that get government off the back of business,” Moore concludes, “a new era of prosperity is just around the corner.” Not surprisingly, that is precisely what Moore and his pal Art Laffer said about the tax cut package Sam Brownback passed in Kansas, which has accomplished little beyond inflicting a series of budget crises on the state that precipitated painful cuts to social programs.

So really, the value Stephen Moore brings to Team Trump isn’t in the tweaks he may or may not be making to the candidate’s tax plan. His primary contribution will be to gussy Trump’s plan up with the same old trickle-down dogma that treats magical thinking as economic reality and pretends that an unprecedentedly large tax cut for the rich will balance the budget and bring your job back from China.