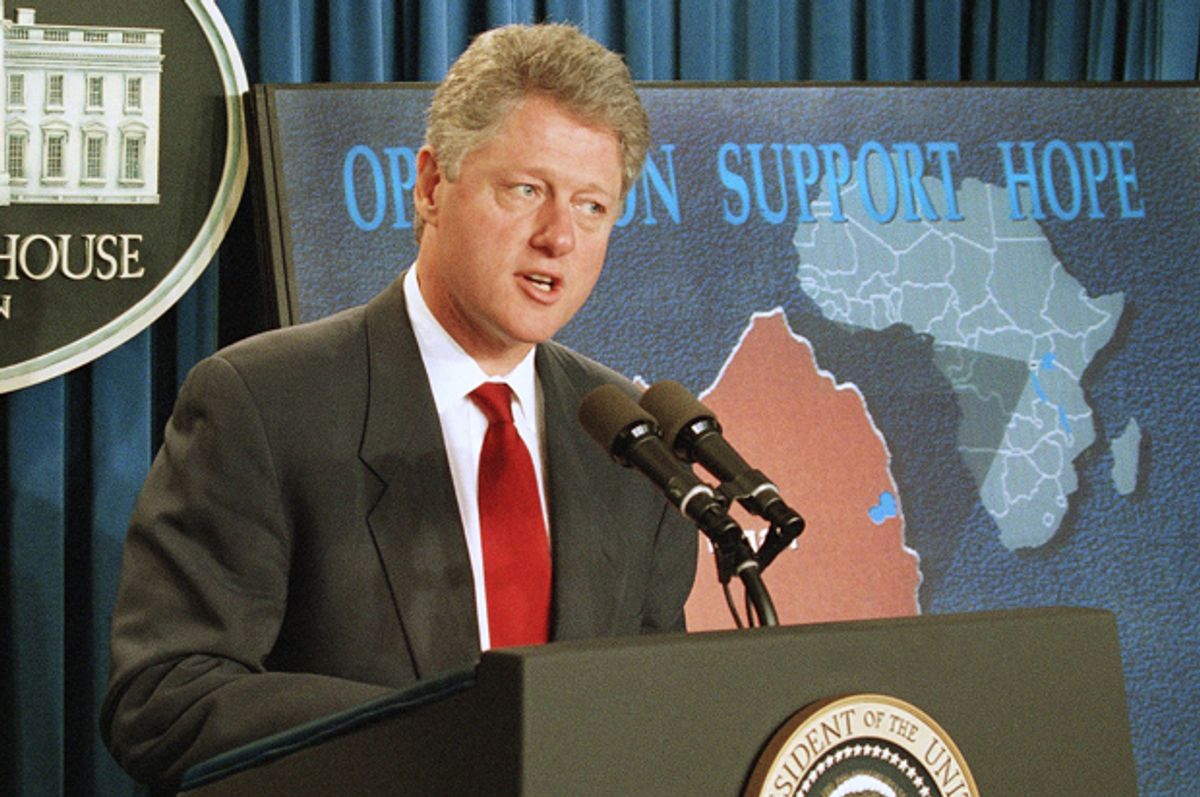 Bill Clinton announces that he has asked Congress to approve emergency funds of $320 million to supply water and food to refugees who have fled Rwanda, July 29, 1994. (AP/Wilfredo Lee)
--

The 2016 election has brought many of the Clinton administration's reprehensible policies back into the limelight.

Bill, with the steadfast support of Hillary, gutted welfare, implemented "tough-on-crime" policies that fueled racist mass incarceration, pushed through the destructive neoliberal NAFTA trade deal, signed laws that created a system of arbitrary mass detention and abuse for refugees and migrants, passed anti-LGBTQ legislation and oversaw the NATO bombing of Yugoslavia that effectively destroyed the nation based on lies.

Much less interrogated about Clinton's record, however, is his administration's shameful action — or lack thereof — during one of the most horrific atrocities carried out during his tenure: the Rwandan genocide.

An international investigation conducted in the wake of the genocide concluded that "it is indisputably true that no nation did more than the US to undermine the effectiveness of" attempted United Nations action to prevent or at least mitigate the bloodbath.

The scandal exposes the hypocrisy of persistent U.S. calls for militaristic ostensible "humanitarian intervention" in places like Bosnia and Yugoslavia, and later Libya and Syria. As President George W. Bush would later admit, the U.S. militarily intervenes based on its "strategic interest," not on humanitarian need.

From April to July 1994, in approximately 100 days, between 500,000 and 800,000 men, women and children were killed, the vast majority from the minority ethnic group the Tutsis. In the most conservative estimate, more than three-quarters of the registered Tutsi population was massacred.

In order to investigate why and how the slaughter took place, in 1998, the Organization of African Unity, or OAU, created the International Panel of Eminent Personalities to Investigate the 1994 Genocide in Rwanda and the Surrounding Events.

In addition to the hundreds of thousands killed, "Thousands more were raped, tortured, and maimed for life," the OAU panel noted in its 2001 report. "Victims were treated with sadistic cruelty and suffered unimaginable agony."

Moderate members of the majority Hutu ethnic group also suffered at the hands of extremists, and millions were internally displaced or became refugees in neighboring countries.

"There was nothing inexorable about this process," however, the OAU stressed. The genocide was not inevitable. And the international community utterly failed to do anything to stop it.

The U.S. government, under the leadership of the Clinton administration, bears special responsibility for this global inaction. It systematically stonewalled any action from the United Nations, essentially allowing the genocide to drag on without backlash, the OAU investigation concluded.

"As the carnage continued, the UN dithered in organizing any kind of response to the ongoing tragedy," the international panel explained. "The Americans, led by US Ambassador Madeleine Albright, played the key role in blocking more expeditious action by the UN."

The U.N. Assistance Mission to Rwanda, or UNAMIR, was set up in October 1993. Reflecting after the genocide, UNAMIR Commander General Romeo Dallaire insisted, "The killings could have been prevented if there had been the international will to accept the costs of doing so."

"Virtually every authority we know believes" the deaths could have at least been significantly reduced, the OAU concluded in its report. "It seems certain that appropriate UN intervention at any time after the genocide began would have had a major role in stopping the killings."

Dallaire insisted that 5,000 U.N. troops with the proper mandate could have prevented most of the killings. Prestigious U.S. academic institutions and the Army undertook an intensive study in 1998 and came to the same conclusion. Yet the U.S. government prevented such action at the time of the genocide.

"Rather than respond with appropriate force, the opposite happened," the OAU reported.

When 10 members of the Belgian Blue Berets were killed, Belgium withdrew its troops from Rwanda. "Exactly two weeks after the genocide began — following strenuous lobbying for total withdrawal led by Belgium and Britain, and with American UN Ambassador Madeleine Albright advocating the most token of forces and the United States adamantly refusing to accept publicly that a full-fledged, Convention-defined genocide was in fact taking place — the Security Council made the astonishing decision to reduce the already inadequate UNAMIR force to a derisory 270 men," the OAU wrote.

"Today, it seems barely possible to believe. The international community actually chose to abandon the Tutsi of Rwanda at the very moment when they were being exterminated," the international panel said.

"The significance of the Security Council's action should not be underestimated: Its refusal to sanction a serious mission made the genocide more likely," the report added. "The feeble UN effort helped persuade the Hutu radicals that they had nothing to fear from the outside world, regardless of their deeds."

The U.S. played the most pivotal role in stymieing U.N. action. The OAU and a slew of observers say the Clinton administration was the principle culprit in blocking the international response.

"Significantly enough, almost the only debate among American experts is the extent to which the United States was responsible for the Rwandan genocide. We know of no authorities who argue anything less," the panel of experts noted in the report.

Its report cites one expert who wrote, "The desertion of Rwanda by the UN force [UNAMIR] was Hutu Power's greatest diplomatic victory and it can be credited almost single-handedly to the United States."

Another expert wrote: "The United States almost single-handedly blocked international action in Rwanda six weeks prior to the genocide, which might have prevented the bloodbath altogether."

"Since we have already made clear our view that several nations, organizations, and institutions directly or otherwise contributed to the genocide, we can hardly blame the catastrophe solely on the United States. On the other hand, it is indisputably true that no nation did more than the US to undermine the effectiveness of UNAMIR," the OAU added.

"Terrified Rwandans looked to UNAMIR for protection, yet 'with the exception of Great Britain, the United States stood out as exceptionally insensitive' to such hopes."

"Even in the midst of the genocide itself, Rwandan lives received no priority in American policy," the report said.

When the 10 Belgian Blue Helmets were killed in April 1994, "a panic-stricken Belgian government swiftly withdrew its entire contingent from Rwanda. Embarrassed, Belgium began lobbying for the entire UNAMIR mission to be withdrawn. US Ambassador Madeleine Albright was quick to exploit this proposal."

"Perhaps failing to see the real significance of her own words, she suggested that a 'small, skeletal' operation be left in Kigali 'to show the will of the international community.'"

"Later," Albright insisted, "the [Security] Council might see what could be done about giving it an effective mandate."

"In fact, this was exactly what transpired as the Security Council, in the midst of the genocide, dramatically reduced UNAMIR to a token level of 270 persons people and restricted its mandate to mediation and humanitarian aid," the OAU wrote. "This decision was taken despite strong protests to the contrary from the OAU and African governments."

Then-U.N. Secretary-General Boutros "Boutros-Ghali and the US clashed bitterly during his tenure," the report added. In his memoir, Boutros-Ghali wrote, "It was one thing for the United States to place conditions on its own participation in UN peacekeeping. It was something else entirely for the US to attempt to impose its conditions on other countries. Yet that is what Madeleine Albright did."

"No amount of evidence ever changed the American position," the OAU stated bluntly. "As we will soon see, throughout the genocide, American machinations at the Security Council repeatedly undermined all attempts to strengthen the UN military presence in Rwanda."

The U.S. is by no means the only actor that bears responsibility. The ethnic tensions in Rwanda went back decades, and were cultivated by colonial powers and the corrupt ruling class.

"At its heart was the deliberate choice of successive elites to deepen the cleavages between Rwanda's two main ethnic groups, to dehumanize the group out of power, and to legitimate the use of violence against that group. In the process, a culture of impunity gradually became entrenched," the OAU explained.

Historically, Western colonial powers had exploited the ethnic differences in Rwanda to consolidate power. "In the colonial era, under German and then Belgian rule, Roman Catholic missionaries, inspired by the overtly racist theories of 19th century Europe, concocted a destructive ideology of ethnic cleavage and racial ranking that attributed superior qualities to the country's Tutsi minority," the report added.

The Tutsis, at just 15 percent of the population, were more favorably treated, whereas the Hutu majority suffered from what the colonialists considered "brutishness and innate inferiority."

"Since the missionaries ran the colonial-era schools, these pernicious values were systematically transmitted to several generations of Rwandans, along with more conventional Catholic teachings," the OAU noted.

The blatant hypocrisy of "R2P"

Critics of former U.S. Ambassador to the U.N. and Secretary of State Madeleine Albright have called attention to her leadership in the destructive stonewalling, describing her as a "war criminal" for her actions in Rwanda and elsewhere.

The National Security Archive at George Washington University also obtained Clinton White House emails and handwritten notes from Susan Rice — then a member of the National Security Council staff and now a national security advisor and former U.S. ambassador to the U.N. — that detail the U.S.’s role in stymieing international action.

Since 1994, nevertheless, the U.S. government has persistently used the Rwandan genocide as a political tool; it constantly brings up the incident in order to justify calls for militaristic "humanitarian intervention" in other countries.

Under the banner of the "responsibility to protect," or R2P, politicians and pundits have insisted the U.S. and NATO must take more aggressive military action in Libya, Syria and more — again and again and again.

Yet during the time of the extreme atrocity, the U.S. actively prevented the attempts of the international community to stop it.

For reasons such as this, renowned scholar Noam Chomsky has described R2P as the U.S.'s "new pretext for intervention," after the end of the Cold War.

The OAU report itself pointed out this hypocrisy, noting that an "influential American journal acknowledged that what was happening in Rwanda was indeed a genocide, a catastrophe far beyond that of Bosnia, which was then at the top of the international agenda." Yet NATO insisted multiple times throughout the 1990s that it must bomb Bosnia and Herzegovina, ostensibly for "humanitarian" reasons.

Former President George W. Bush openly admitted to this double standard in a 2000 television interview cited in the report.

An interviewer asked the U.S. president what he would do "if, God forbid, another Rwanda should take place."

George W. Bush replied: "We should not send our troops to stop ethnic cleansing and genocide outside our strategic interest. I would not send the United States troops into Rwanda."