“Game Of Thrones” recap: Nobody puts Dany in a corner 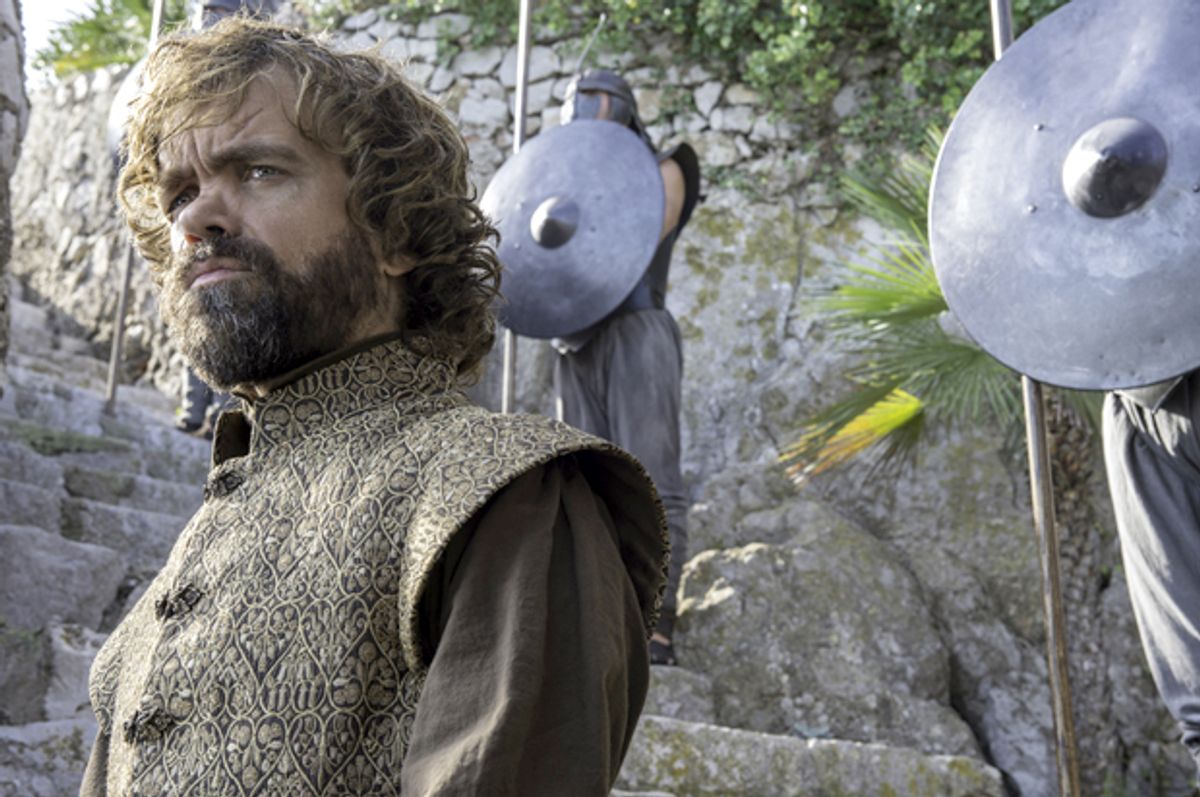 Unfortunately, I laughed at the final shot of last night’s “Game Of Thrones,” titled “Book Of The Stranger.” Up until then, the episode had been one of the season’s strongest—a cavalcade of scene-setting that raised the stakes with each successive scene, demonstrating the pot-boiling intensity that “Game Of Thrones” has crafted so well in earlier seasons. Now that we have a sense of where each of the major players are, both physically and emotionally, it’s easier to feel suspense during the moments where Cersei and Jaime are dealing with Kevyn (Ian Gelder) and Oleanna (Diana Rigg), or when Tyrion is trying to sell Grey Worm (Jacob Anderson) and Missandei (Nathalie Emmanuel) on a staggered abolition of slavery, as opposed to doing it in one fell swoop. Midway through a season of “Game Of Thrones,” the conversations in airy stone halls or windswept grey hillsides take on a new resonance, and “Book Of The Stranger” is no exception.

But, well, then there’s that ending. It’s a neat trick, replaying Daenerys’ trump card back on the plains where she first proved her mettle to herself, the audience, and the world around her. But where the season one finale is bone-chilling, this scene is rather less so, just because we are in the position of knowing, this time, that she will turn out to be the Unburnt. For what it’s worth, I wasn’t aware that Dany is now forever immune to fire. (Plus, if all she needs to do to survive fire is bare her breasts, I’m surprised she hasn’t pulled out this party trick more times in the last few seasons.) Her fire-immunity makes as much sense as anything, I guess, but one of the reasons that the introduction of magic into the world of “Game Of Thrones” has been so powerful is because it is arduously earned. At the end of the first season, when Dany emerges from the pyre unscathed, there seemed to be a kind of special magical power at play in the moment where she willed her long-dormant dragon eggs to hatch—a combination of desperation and willpower and the movements of fate. There was that red comet in the sky, and her entirely destroyed khalasar around her, and her sacrificed unborn child and dead husband, too.

The end of “Book Of The Stranger” is not nearly so momentous. Dany already had three saviors in attendance before she pulled out her party trick, and at no point in the last three episodes has Dany evinced any sort of fear of what might happen to her at the hands of the Dothraki khals. Emilia Clarke’s performance has translated to “mild annoyance” or “stone-faced disdain”; it hasn’t crossed over into anything deeper. So watching her burn the holiest place in Vaes Dothrak to cinders—and performing a coup d’etat in the process—feels a little bit over-the-top, even though the show tosses the threat of gang-rape and bestiality at her just to up the stakes. She doesn’t seem to really feel any of it, and her masses of new subjects—all people of color—seem stunned into submission, more than praising her name.

For the viewer, the end of “Book Of The Stranger” is a lurid scene that seems to highlight that everything that feels wrong about “Game Of Thrones”—unnecessary boobs, uncomfortable racial politics, and a seemingly unearned descent into violence. It’s not even technically impressive—which is weird, considering how well-shot earlier scenes were in just in this episode alone. For example: The first shot of the episode is a gorgeous one of Jon Snow’s sword, Longclaw, reminding the viewer of his former Lord Commander and his weighty duties. And the lighting and framing in the scene between Cersei and Tommen is a breathtaking showcase of intimacy and coercion. But in the finale, the fire looks poorly animated, the direction is incredibly unimaginative, and it seems to go on forever, cutting back to Clarke’s naked and firelit breasts again and again and again.

“Game Of Thrones” created quite a bit of conversation at the end of the third season episode “Mhysa,” where Dany was shot being hailed as mother and savior by a teeming mass of unwashed masses of color, in a rather awkward moment that highlighted the show’s difficulties with understanding its own racial politics. “Book Of The Stranger” continues the trend of Dany awaiting the mindless worship of dirty proles of color, which raises a few red flags. The result was a final scene that, instead of feeling triumphant or soaring, landed at comically predictable camp. Kneeling in unison is how “Mulan” ended, you guys!

Though I doubt that the final scene was supposed to be funny, I have been wondering if it is supposed to be off-putting. We’ll have to see how the rest of the season plays out, but the bloodthirsty, casual way that Dany overthrew Vaes Dothrak is actually a rather unsettling harbinger of her particular brand of charismatic tyranny. Instead of being framed as a savior, she could just as easily be seen as a despot. Back in season three, in Slavers’ Bay, Dany was liberating the enslaved, who cried out her name with joy when she broke their chains. In the heart of the Dothraki sea of grass, no one is calling her a savior. They’re afraid. Dany hasn’t liberated them, she’s conquered them. She decided to burn everyone to death mostly because she wanted to; Dany, flush with six seasons of power and entitlement, is now just doing whatever she wants.

To be sure, it’s not like the Dothraki are without fault. Slavery, forced marriage and brutality are invoked by the Dosh Khaleen (and a new widowed khaleesi, played by Hannah John-Kamen), and Dany has opposed some of the Dothraki people’s most violent practices since season one. But the major mistake the khals made was to imprison a self-made Targaryen Queen; Dany’s greatest cause is her own power. There’s a recognition of this in Jorah and Daario’s eyes as they kneel to their chosen queen, a combination of resignation and awe. The first five seasons of this show have been about Daenerys claiming her power; but now that she has it, there appears to be no guarantee at all that she can be trusted with it. She is a very powerful weapon—literally, a flamethrower—that you just hope is pointing in the right direction.

Indeed, most of “Book Of The Stranger” is about what it means to be a ruler, whether that is the former Lord Commander, the mother of the King of Westeros, a claimant to the Salt Throne of Pyke, or the boy-king in the Vale of Arryn. Tyrion embodies dispassionate pragmatism; Ramsay Bolton, all-consuming terror. That may also be why the episode is rife with sisters and brothers coming together—the very touching reunion of Jon and Sansa, after five seasons apart, is joined by Theon and Yara’s reconnection after war and torture and Margaery finally making contact with her brother Loras following months of imprisonment. Each pair is bringing together family members who share the same traditions and values; the Starks, Greyjoys, and Tyrells all have their own pride and purpose. And they each are currently defined by a reluctant male heir and a far more ambitious daughter of the house. Margaery, in particular, as translated by Natalie Dormer, delivers some fantastic frustrated ambition and fight and despair in just one package.

It’s an interesting callback to one of our first brother-sister duos attempting to find a way to rule; Dany, after all, determined the easiest way to deal with a weaker older brother was to sentence him to death. I’m mostly past reading too much into episode titles for “Game Of Thrones,” but “Book Of The Stranger” makes me wonder if the ruler—a character so ubiquitous in this episode—is a stranger to the viewer and their subjects, a force of power and corruption and personality that seems to run on a separate set of rules. If anyone looks like the Stranger in this episode, it is the woman standing at one end of a crowd while thousands of people kneel at her feet.