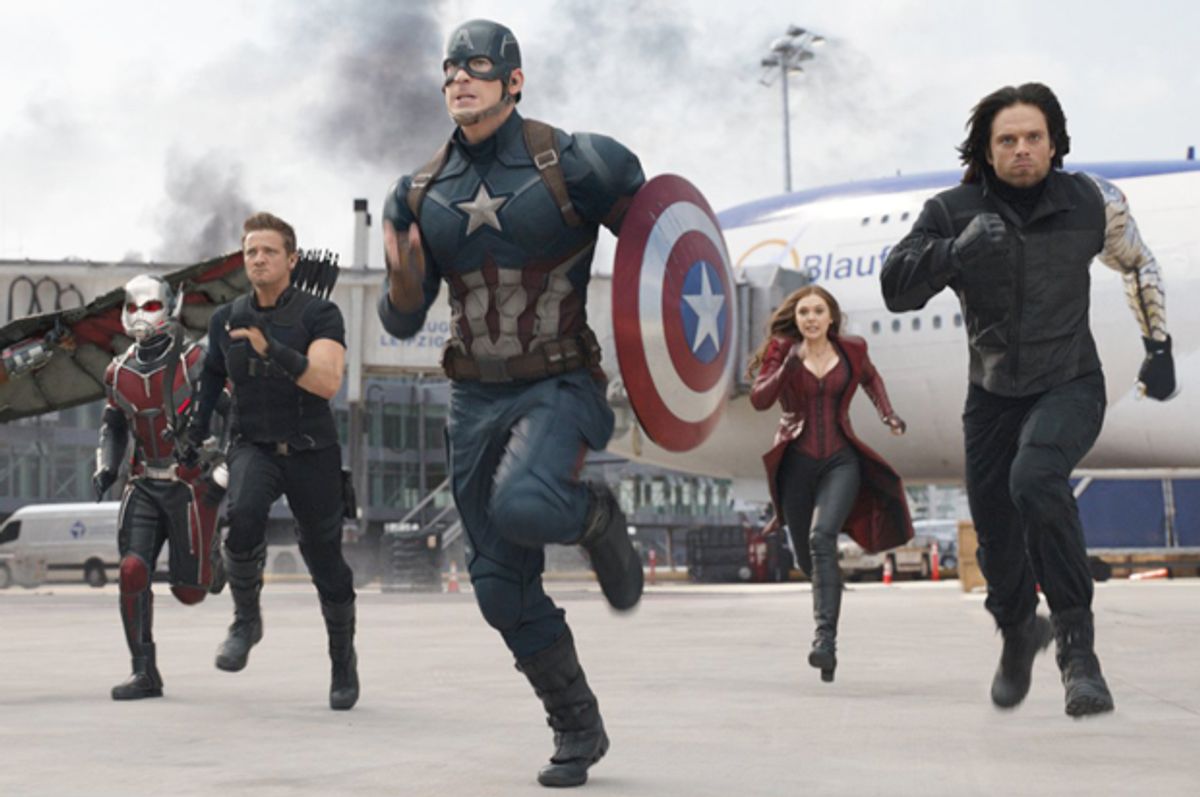 What a time to be alive in the age of superheroes… at least on the silver screen. This past weekend marked another strong showing of the latest installment of Marvel’s Captain America franchise. Joe and Anthony Russo’s “Captain America: Civil War” picks up right where “Avengers: Age of Ultron” left off, and we find the team on a mission in Lagos, Nigeria. When their efforts to exact justice result in unintentional civilian casualties, international demand that the heroes be held accountable for their actions reaches a fevered pitch and the Sokovia Accords are born.

Much like when the Russo brothers’ “Captain America: The Winter Soldier” delved into issues of national security, the underlying themes of accountability and government oversight in “Civil War” strike a chord when it comes to the role of the United Nations and how best to bring order to a chaotic world.

The United Nations was built on three equal pillars: human rights, development, and peace and security. The peace and security pillar receives a great deal of attention as the international community seeks to manage non-state actors and transnational threats in a context of ever-changing 21st century warfare. The Avengers are a non-state actor facing other non-state actors posing transnational threats in battles carried out with new and emerging technologies—this powder keg is a perfect amalgamation of the real challenges facing the international community.

In reality, the United Nations handles such scenarios by setting standards for states through resolutions, treaties, and accords, and by deploying peacekeeping forces to “assist in laying foundations for sustainable peace.” In the film, 117 states sign the Sokovia Accords at the United Nations in Vienna as a means of asserting the importance of exercising oversight over when the Avengers should intervene. But while we recognize the film for its entertainment value, policy wonks wonder if such Accords could hold credence in the real world.

The questions the states grapple within this fictional scenario should sound very familiar to students of history: Should the international community intervene to halt atrocities as NATO did in Libya in 2011 or send peacekeeping forces to enforce peace accords as the U.N. has in Haiti, Angola, and elsewhere? Or should it hold back and let local, national, and regional actors resolve the crisis but risk repeating such abject failures as were seen in Rwanda and most recently Syria? If a single member of the international community had a tool at its disposal that could deftly take out a target and potentially end a conflict but posed significant risk to the civilian population, when should it be deployed, and who should deploy it? There’s always the chance that intervention can cause more harm than good; in “Civil War,” Wakandan King T’Chaka warns that “if victory is at the innocents’ expense, it is not victory at all.” These conundrums echo real life debates surrounding the use of semi-autonomous robots, private security firms, carpet bombs, drones, cyber warfare tools, and other weapons. A legal framework governing the use of these tools exists, though in a nascent state.

The Sokovia Accords seek to control implementation of a tool—a weapon, really—which is a collection of sentient human beings who are based in a single country, which is also a permanent member of the Security Council (the United States). Setting aside the fact that power politics make it unlikely that a dominant country would have a monopoly on such a weapon and furthermore willingly submit that weapon to international regulation, the execution of that oversight would be exceedingly difficult. An accord, unlike a treaty, lacks legal enforcement mechanisms. In this respect it is a somewhat weaker tool, but it is easier to achieve because it does not require a lengthy ratification process in home legislatures with varying levels of efficiency in procedure and hostility toward the United Nations or their respective executive branches. Accords also open space for effective consensus, a vital function of the United Nations in keeping a plurality of states at the table, working together to “sow the seeds of peace.” Building consensus is a labor and time intensive task, but it cultivates critical political buy-in when garnering wide support for initiatives that address the most difficult challenges of our day so one or two powerful countries aren’t left alone to act as the world’s police.

Perhaps one day one of those initiatives will be The Avengers Initiative, but until then the international community will continue to grapple with difficult questions regarding regulation of the weapons already available to it, struggling to keep up with the development of technology and the proliferation of threats, state and non-state alike. The U.N. has its limitations in managing these crises—after all, as Steve Rogers solemnly notes in the film, “it’s run by people with agendas, and agendas change”—but it remains a critical forum for global peace and security.

Ashley Miller works at a leading Washington, D.C. think tank and is a graduate of American University.

Rachel Slattery works at a leading Washington, D.C. think tank and is a graduate of American University.