When you're a woman in public, your appearance is open for shaming at any time—even during the morning news 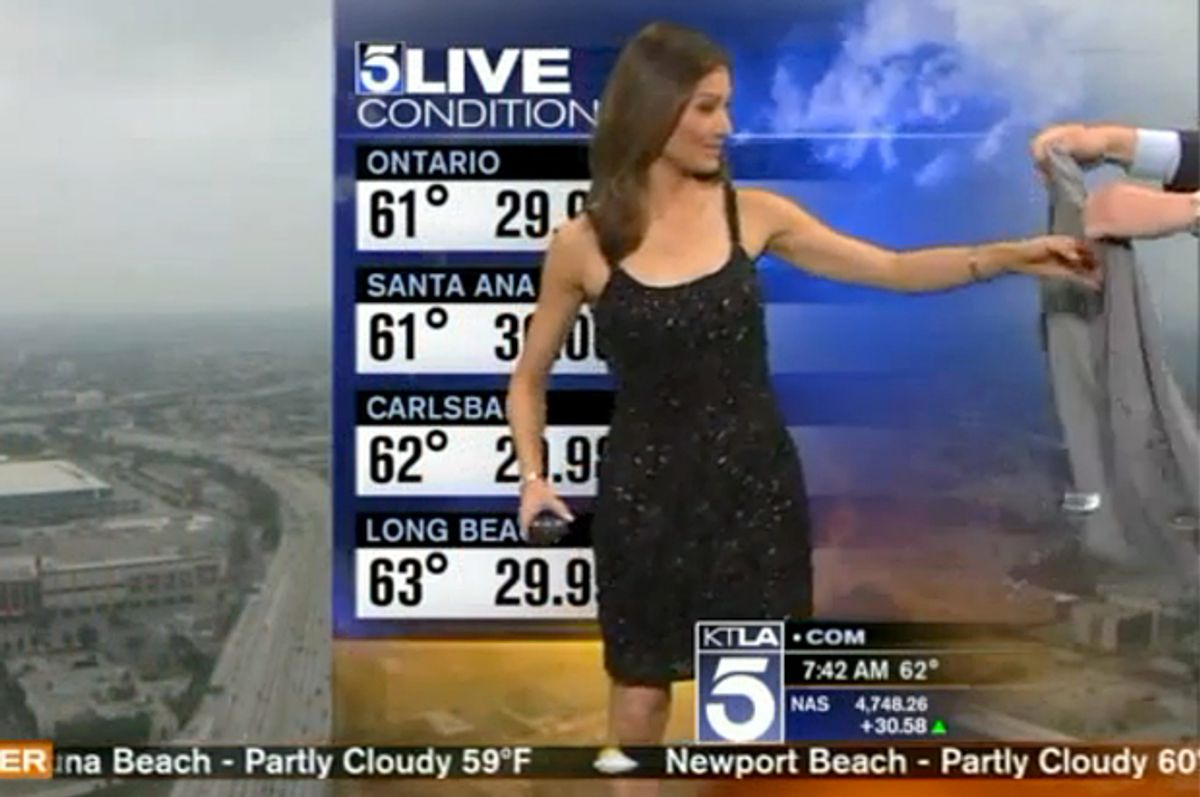 I'd just like to remind everybody that in Los Angeles, United States of America, in the warm weather month of May, we could have a national uproar over a woman wearing a sleeveless dress on local television. And then I'm going to go back to bed and you can wake me up when Hillary's in the White House.

On Saturday, KTLA's Morning News longtime meteorologist was giving a weather report in what admittedly looked like an evening dress — black, sleeveless, beaded, above the knee. But she was nonetheless clearly unprepared to find herself interrupted in the midst of her report, as a disembodied arm appeared on screen to proffer her a sweater. "You want me to put this on?" she asked. "Why?" A male voice — later revealed to be her colleague Chris Burrous — explained, "We're getting a lot of emails," as she hooted a shocked, "What? Really?" But she dutifully donned the oversized cardigan nonetheless, like a chastised middle schooler whose dad is disapproving of her school attire, before cracking, "I look like a librarian now."

What followed was an explosive response about both the appropriateness of Chan's outfit, and of Burrous' tactic of egging her into covering up live on the air. On her Facebook page, Chan shared a clip of the news crew reading some of the emails, including one in a which a viewer complained, "Looks as if she didn't make it home from her cocktail party last night." Read into that as you will. In the video, Chan can be heard asking, "Can we talk about my weather performance?… I don't know what to tell you. You know, it's a black dress. I'm sorry if it was inappropriate."

Chan, by the way, has previously been sent out to do travel reports in a bathing suit — suggesting that the standard for "inappropriate" work attire, for women at least, can change on a whim.

On her personal blog Sunday, Chan gamely offered her own "thoughts on the LBD/sweater moment that went viral," explaining that "I was surprised since I hadn’t seen any of the emails and didn’t think there was anything that inappropriate (the beads/sequins were probably a little much for the morning, but what girl doesn’t like something that sparkles?!), so I played along and put on the sweater."

And she added that "the black beaded dress was a backup. The pattern on my original black and white dress didn’t work on the weather wall (for some reason, it turned semi-transparent), so after my first weather hit at 6am, I changed." For context, just earlier this year, Chan had a live broadcast moment where her patterned dress clashed with the green screen and Burrous ran to the rescue with his blazer.

Chan continued. "For the record, I was not ordered by KTLA to put on the sweater. I was simply playing along with my co-anchor’s joke, and if you’ve ever watched the morning show, you know we poke fun at each other all the time. I want our viewers to know it was never our intention to offend anyone. We are friends on and off the air and if you watch our newscast, you know that."

Yet as Gersh Kuntsman wrote Monday in the Daily News, "Even if KTLA was getting 1,000 emails a minute and was threatening to crash Google’s secret servers, who is Chris Burrous to undermine his colleague? Imagine how you'd feel at the office if a co-worker mocked your work in front of everyone."

One can question whether an evening dress is a bit out of place on a morning broadcast — and also question Chan's deferential, sweeping generalization that "What girl doesn’t like something that sparkles?" But that's not the point. Her outfit may have been a strange choice, but it was most assuredly not an unfit for family viewing one. So rather than quite literally leaping to disrupt her in midst of doing her actual job, her colleague could have simply let it go. And maybe instead of Chan being the one to issue a statement about not meaning to give offense, her bosses could.

But the saddest, most depressing part of the whole incident involving a professional adult woman is a moment on the clip she posted on Facebook, where she sarcastically says, "So tomorrow, I'd better hit it out of the park. I'd better make everybody happy. Now I need to go shopping."