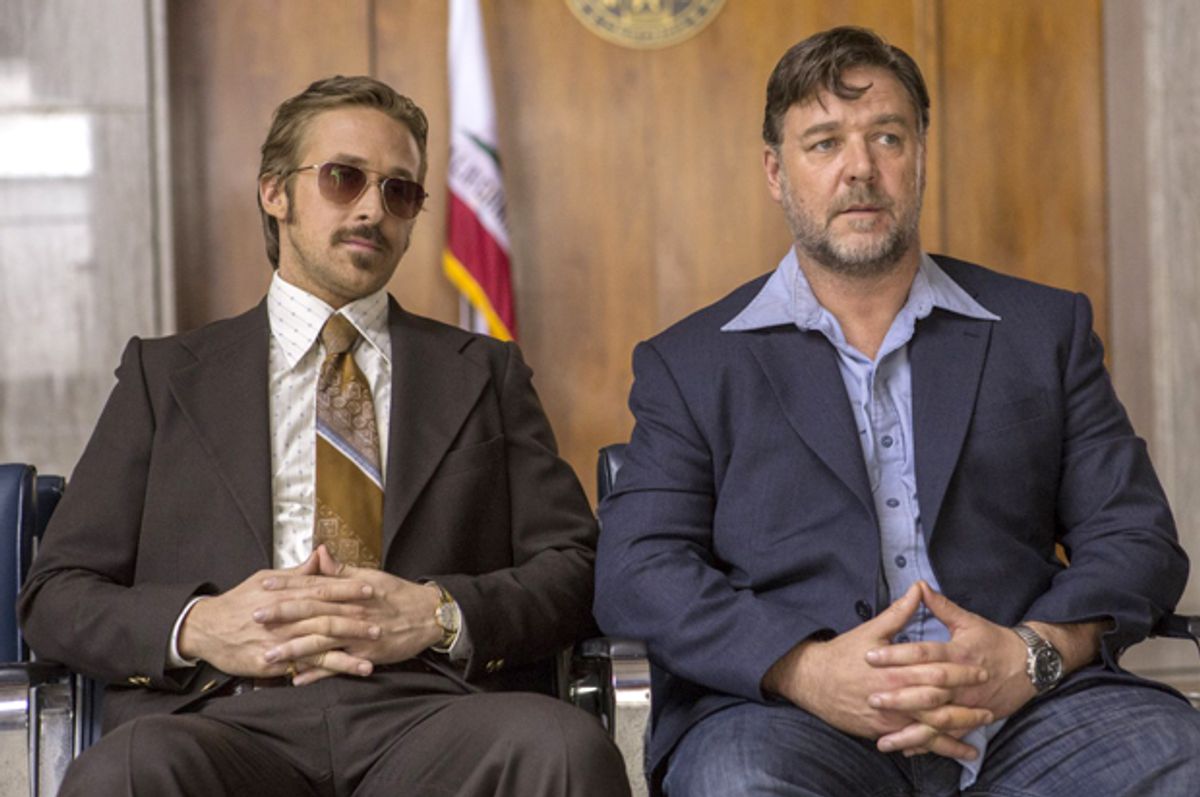 For reasons that are both glaringly obvious and also run deep below the surface of our culture, Los Angeles has played itself on screen more than any other city in the world. Other places have sunlight and other places have depravity; other places have insane cult leaders and serial killers and people who believe that wealth has brought them enlightenment. But at least when it comes to the collective cinematic imagination, no place combines those things quite the way the City of Angels does.

Does the relentless atmospheric sleaze of “The Nice Guys” sometimes feel overly calculated, or just dialed up too high? Yeah, definitely. But Black isn’t Orson Welles and isn’t trying to be; he’s the guy who wrote the first two “Lethal Weapon” movies, and then worked his way back into Hollywood’s good graces, many years later, as the writer and director of “Iron Man 3.” He knows what he’s doing and remains in control of the misanthropy, stupidity and violence throughout “The Nice Guys,” which combines a whole bunch of overly familiar material in lunatic, original fashion. If this movie bears a strong generic resemblance to Paul Thomas Anderson’s recent “Inherent Vice” and Howard Hawks’ classic “The Big Sleep,” for instance, it’s self-consciously aimed at viewers who’ve never even heard of those pictures, let alone seen them. Or rather, it’s calculated to reach different kinds of viewers in different ways; Black has loaded “The Nice Guys” with in-jokes for film nerds.

To go even nerdier and more specific, “The Nice Guys” is so closely modeled on “Chinatown” as to be an elaborate pastiche of Roman Polanski’s 1974 classic, except turned into an idiotic bromance and updated to the decade when “Chinatown” was actually made. I promise these aren’t spoilers, and anyway the so-called plot of “The Nice Guys” isn’t really the point, but both movies are about high-level corruption and damaged parent-child relationship in the upper echelons of power. While the semi-comprehensible plot of “Chinatown” concerns a scandal surrounding L.A.’s water supply, “The Nice Guys” is nominally about the poisoned Southern California air of the ‘70s. (Believe it or not, L.A.’s air quality was vastly worse then — before the age of catalytic converters and “smog checks” — than it is now.)

To sum it all up, “The Nice Guys” is basically “Chinatown” remade by Quentin Tarantino and starring foulmouthed, updated versions of Abbott and Costello, as played by two of the most recognizable male stars of our time. Make your purchasing decisions accordingly. That’s not some film-critic stretch, by the way: There are several scenes where Abbott-and-Costello-grade slapstick rises to the surface, one of them a mini-masterwork of comic idiocy involving Holland March (Gosling) trying to hold a gun on Jackson Healy (Crowe) while sitting in a toilet stall and using a magazine to conceal his privates. Of course I realize Abbott and Costello could never have done such a routine for paying audiences, but they definitely would have.

“The Nice Guys” is 100 percent not a serious movie and has absolutely nothing to say about corporate power or environmental activism or how the sex industry permeated American culture in the ‘70s or anything else. Still, there’s something to be said for the fact that those things appear in the movie, if only as themes or gags, and that millions of people will watch it purely for laughs. I feel similarly about the running monologues from Holland March, Gosling’s downscale private eye, about how standards of courtesy and decency have been lost and society has become debauched. On the surface, and maybe under it too, that’s dopey borrowed shtick from a guy who’s like a fourth-rate imitation of Raymond Chandler’s Philip Marlowe or Ross Macdonald’s Lew Archer.

But one of the redeeming characteristics of Black’s humor (I would argue) is that it’s always a bit more complicated than it appears. (That was the problem, arguably, with the big-budget ‘90s bombs like “Last Action Hero” and “The Long Kiss Goodnight” that sabotaged Black’s career the first time around.) We laugh at Holland’s “civilization is lost” soliloquies because, ha ha, it’s 1977 and he has no idea what’s coming — except that as Black is old enough to remember, the late ‘70s really were a time of unique decrepitude in recent American history. And then we laugh because he’s the wrong messenger, as a guy who makes a living bilking old ladies and pretending to look for missing people who are already dead.

But Black understands he can push the character only so far, and Gosling does too. This is one of his best and funniest performances, and as big of a scumbag as Holland may be, he still has that adorable 13-year-old daughter around to humanize him. Crowe’s performance as Jackson, meanwhile, is one of the movie’s unexpected delights. On one level he’s an archetypal mid-career Crowe character, a paunchy, hangdog piece of hired muscle plagued with self-doubt. But even as Jackson lumbers around L.A. wearing stubble, a Hawaiian shirt and a blue Pleather jacket, punching strangers in the face with brass knuckles, he remains mysteriously lovable. He forges a spirit-animal connection with Holly (Rice), Holland’s daughter, right after breaking her dad’s arm and leaving him howling on the floor.

Holland and Jackson wind up joining forces, not long after the arm-breaking episode, to track down a missing young woman who starred in a missing porn film, which may include an explosive political message. If you want to start totaling up all the references to other noir plots in that one sentence, go right ahead. As I say, the story’s not important, or nowhere near as much as the clothes and cars — perfect, and not overdone — and Philippe Rousselot’s digital cinematography, which conjures up a ‘70s vibe without outright quotation. (I would argue that no clean-cut L.A. teenager had Sex Pistols or Blondie posters in her bedroom until several years later, but we’ll let that go.) Is it frustrating that Black is slightly too smart for this deliberately dumbed-down comedy and lets us know it, or satisfying that “The Nice Guys” accomplishes more than many officially more ambitious films? That’s a problem for a third-rate noir detective to ponder aloud for a while, before concluding that, y'know, it all depends on your perspective.