A CIA agent admitted the U.S. repressed Mandela and the anti-apartheid movement. The ANC says this continues today 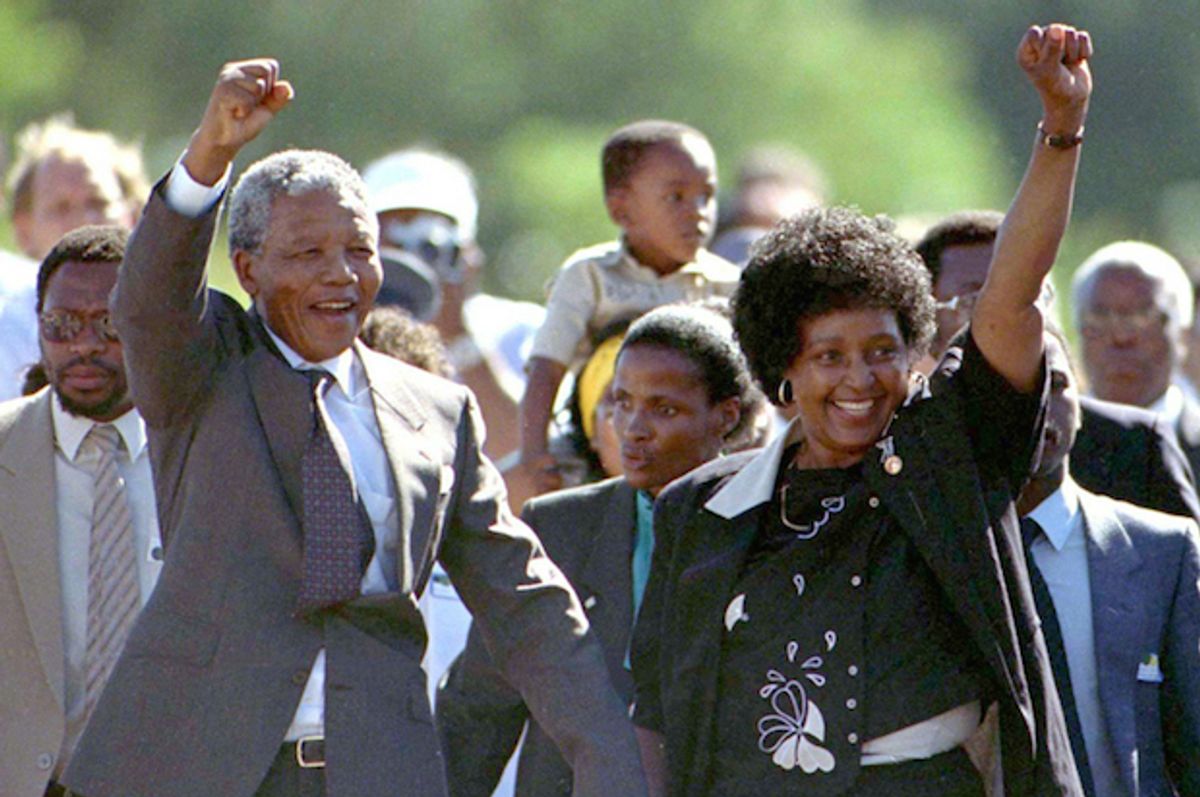 Nelson Mandela is accompanied by his former wife Winnie, moments after his release from 27 years in prison, on February 11, 1990 (Reuters)
--

It has long been suspected that the CIA played a role in the apartheid South Africa regime's arrest and 27-year imprisonment of anti-apartheid leader Nelson Mandela. It has now been confirmed.

Donald Rickard, a former U.S. vice-consul in Durban, South Africa who worked as a CIA agent, admitted that he tipped off the apartheid regime with Mandela's location in 1962, the British media reported this week.

Rickard said the U.S. helped arrest the anti-apartheid leader because he was “the world’s most dangerous communist outside of the Soviet Union.” The U.S. feared Mandela was about “to incite” a communist revolution against the apartheid regime, and could align with the Soviet Union.

"Mandela would have welcomed a war," the former CIA operative said. "If the Soviets had come in force, the United States would have had to get involved, and things could have gone to hell."

The 88-year-old ex-CIA operative made these comments in an interview in March with researchers for "Mandela's Gun," a new film by British director John Irvin, which will appear in the 2016 Cannes Film Festival next week.

Rickard, who retired from the CIA in 1978, died two weeks after breaking the silence in the interview.

In 2013, Mandela died, leaving behind a long legacy of support for liberation movements throughout the world, particularly in Palestine, where anti-apartheid leaders such as Desmond Tutu have compared the actions of the apartheid South African regime to those of the Israeli government. In late April, Palestinian officials unveiled a statue of Mandela in Ramallah, in the occupied West Bank.

The U.S. government propped up the apartheid South African regime for decades. Like its close ally, Israel also supported the apartheid regime.

President Ronald Reagan was particularly close with the apartheid South African regime. “Can we abandon a country that has stood beside us in every war we’ve ever fought, a country that strategically is essential to the free world in its production of minerals we all must have?” he asked in a 1981 CBS interview.

Mandela went on to blast U.S. hypocrisy. “I was called a terrorist yesterday, but when I came out of jail, many people embraced me, including my enemies," he explained in an interview on "Larry King Live" in 2000.

"That is what I normally tell other people who say those who are struggling for liberation in their country are terrorists. I tell them that I was also a terrorist yesterday, but, today, I am admired by the very people who said I was one," Mandela added.

In fact, it was not until 2008 that the U.S. removed Mandela from its terrorism watch list. When the apartheid South African regime declared Mandela's political party, the African National Congress, or ANC, to be a terrorist group, the U.S. State Department did the same, in 1988.

The U.S. condemned Mandela and the ANC for its goals to build a "multiracial Socialist government in South Africa," and for receiving "support from the Soviet bloc, Cuba and a number of African nations."

Prominent transparency activist Ryan Shapiro, a national security researcher at the Massachusetts Institute of Technology, is suing the CIA, along with numerous other government agencies, for information about the U.S.'s role in repressing the anti-apartheid movement.

"We've long known that there has been a U.S. intelligence agency role in the efforts to surveil and suppress the South African anti-apartheid movement," he told BBC in an interview this week.

Shapiro says FBI documents he has received show how, when Mandela was released in prison, the FBI spied on him and his inner circle "for political information about who Mandela was speaking to, about anti-apartheid activities."

Government documents not just from the 1960s, but even from the 1990s, "show that the FBI viewed Nelson Mandela and the South African, United States and global anti-apartheid movements as a serious communist threat that imperiled national security," Shapiro explained.

He also revealed that the NSA was providing intelligence to the apartheid South African regime on the activities of the anti-apartheid movement.

The CIA, on the other hand, is not complying with Shapiro's requests. The agency claimed under oath in federal court that it is will not grant the researcher's FOIA request for records on Nelson Mandela because it is supposedly unable to search through records by someone's name.

Shapiro, who has been referred to as the "most prolific" Freedom of Information Act, or FOIA, requester, is suing the CIA, FBI, NSA and DIA for refusing to release requested records.

The CIA declined to comment on recent media reports about its role in arresting Mandela.

Mandla Mandela, the heir of Nelson Mandela, called on the U.S. and President Barack Obama to apologize, and to make a “full disclosure” of his grandfather's arrest, The Telegraph reported.

“Whilst we were always aware of the West’s role in overt and covert support for the Apartheid state," Mandla said, this "disclosure has put an end to decades of denial revealing the fact that the USA put its imperial interests above the struggle for liberation of millions of people.”

"We call on freedom-loving people of the world to come out in condemnation of this betrayal of our nation, the peoples of Southern Africa and all who suffered as a consequence of the USA’s support for the brutal apartheid state," he added.

Mandla, who is a member of parliament representing Mandela's ANC party, also suggested that the U.N. should punish the U.S., The Telegraph noted.

Zizi Kodwa, a spokesman for the ANC, told the newspaper the revelation was "a serious indictment" but not surprising.

"We always knew there was always collaboration between some Western countries and the apartheid regime," he noted.

Kodwa says the U.S. government is still working to undermine South Africa's government. "We have recently observed that there are efforts to undermine the democratically elected ANC government," he added. "It is still happening now — the CIA is still collaborating with those who want regime change."