The powerless brokers: Trump's got the Koch Brothers running away from the general election and leaving their billions at home

Worried about their legacy and image, the anti-Trump Kochs fear they've wasted hundreds of millions funding the GOP 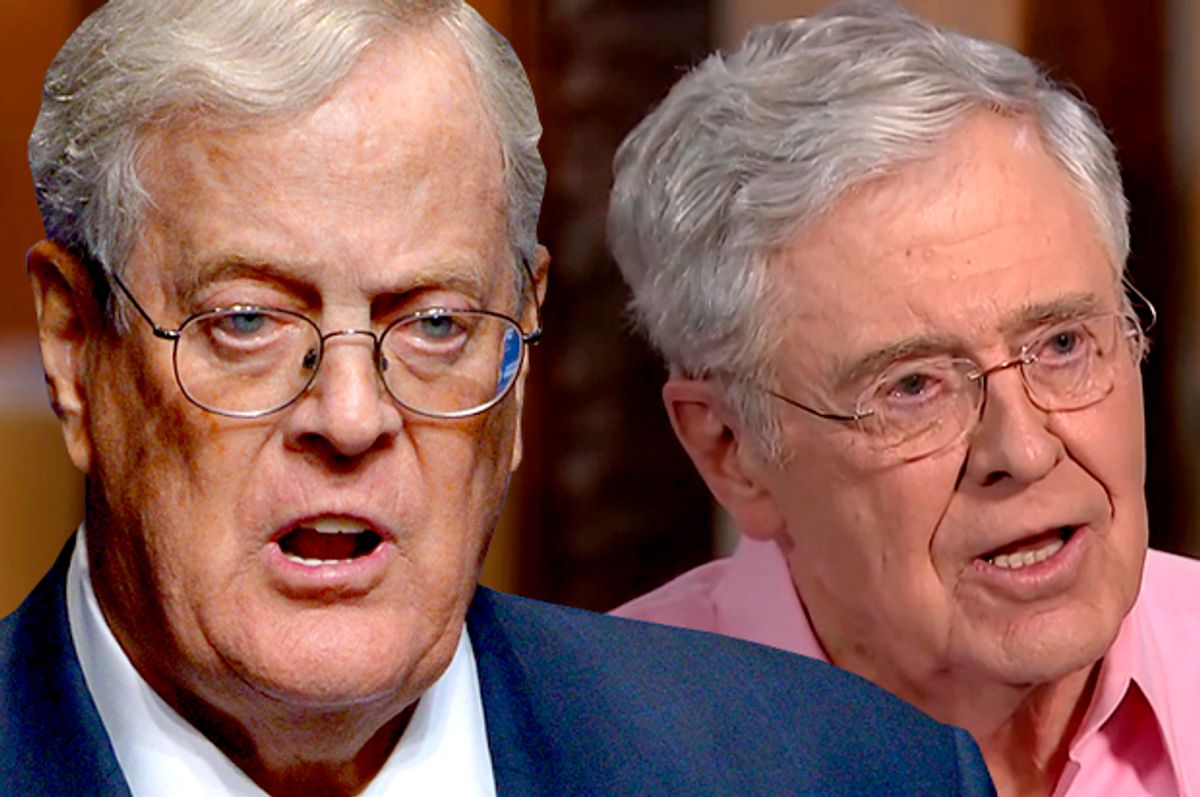 Over the past few years, the wealthiest and most famous political activists in the world have been a couple of multi-billionaires by the name of Charles and David Koch, who most people just refer to as a single entity — "the Koch brothers."  Their names became a household word as they poured hundreds of millions into initiatives all over the country and helped finance the Tea Party takeover of the GOP. They were the most important Republicans in America.

A year ago it was assumed that the Kochs would be spending massive sums in the presidential election as well as down-ballot. However, as Yahoo news reported at the time, there were signs of strain as the brothers exerted more and more influence on Republican party functions and the party didn't know how to respond:

The Republican National Committee’s data arm last year called it a “historic” occasion when it struck a deal to share voter information with the Koch brothers’ rapidly expanding political empire.

It was an uneasy détente between the party committee, which views itself as the rightful standard-bearer for the GOP, and the behemoth funded by Charles and David Koch, which is free of the campaign finance restrictions that bind the RNC and plans to spend almost $900 million in the 2016 election cycle to elect a Republican to the White House.
Party leaders, including the current chief digital officer for the RNC, hailed the deal as an important step forward in the GOP’s attempt to modernize itself.

But after the fall midterm elections, the deal was allowed to expire without being renewed. Since then, relations between the two sides have soured, turning into what one Republican operative described as “all-out war.” Interviews with more than three dozen people, including top decision-makers in both camps, have revealed that the Kochs’ i360 platform for managing voter contacts — which is viewed by many as a superior, easier-to-use interface than what’s on offer from the RNC — is becoming increasingly popular among Republican campaigns.

The RNC is now openly arguing, however, that the Kochs’ political operation is trying to control the Republican Party’s master voter file, and to gain influence over — some even say control of — the GOP.

Jane Mayer's book "The Dark Side" came out shortly thereafter and validated what many had assumed; it appeared at the time that the brothers were making a play to create a parallel party in order to control the agenda from the top down.

Mayer's book laid out the story of how the Kochs, having spent decades funding think tanks like the Cato Institute to educate elites and the public about their libertarian philosophy had made a shift to electoral politics in the 2000s and it was paying off. By 2008 their secretive yearly seminars attracted billionaires by the dozen ready to bankroll any project the Kochs endorsed to stop Barack Obama's nefarious leftist agenda. The mid-term of 2010 turned  over the congress and ushered in the era of hostage taking and government shutdowns. 2012 was a disappointment but once again the 2014 midterms were a right-wing triumph. They were the Kings of the GOP, hated by liberals and loved by Republican politicians eager for a little of their largesse.

And then came Trump. Throughout this year's bizarre primary campaign people have been wondering where in the world the Kochs and their massive electoral apparatus, Americans for Prosperity, were. It seemed ridiculous that these master strategists weren't doing anything to stop this populist demagogue. It had been assumed early on that they'd back one of the usual suspects —  Scott Walker or Marco Rubio were mentioned most often. But after an early feint toward Walker which had to be quickly walked back when the Wisconsin neophyte committed a final clumsy gaffe endorsing a ban on all legal immigration. From that point forward they continued to invite candidates to audition but never showed their hand.

Monday the world found out why when the National Review published a blockbuster scoop revealing that the Kochs have decided to withdraw from national politics. The 900 million dollars they'd planned to spend in this election cycle has been reduced to around 40 million on "educational" campaigns. They will continue their work at the state and local level (which is significant) but they are no longer much interested in electoral campaigns on the federal level. (There was some indication they plan to remain engaged in certain congressional campaigns although the scope of it was unclear.)

Evidently, this first came to light last February when a group from Americans For Prosperity went to the Wichita headquarters to present a Stop Trump plan. They were greeted by the brothers and representatives from the corporate side of Kochs empire who put the kibosh on the project. Apparently, the suits have been worried for quite some time about the toll the high political profile has been taking on the company's prestige. At the same time, the Koch brothers themselves have come to believe that their own legacy is in danger. They have devoted many decades to philanthropy and charitable work and have never thought of their political work as being extreme, even though it is.

TNR reports that they took this very seriously:

The brothers had been warned about this image problem as early as January 2014, when they brought on a new public-relations team led by long-time communications guru Steve Lombardo. There were mounting concerns about damage to the Kochs’ corporate brand, and soon after Lombardo’s hire, Harry Reid took to the Senate floor to call them “un-American.” The brothers didn’t need much convincing that a rebranding effort was necessary.  Pained by the attacks hurled at them, and upset by the revelation in their post-2012 autopsy that Americans viewed wealthy conservatives as uncaring for the poor, they set out to soften their image.

The immediate result was “We are Koch,” a multi-million-dollar advertising campaign featuring smiling minority employees and cinematic sequences of Americana. But the seeds had been planted for bigger changes. Employees have devoted more and more time to social-welfare projects in the two years since. AFP has increasingly steered resources to its “foundation” wing, and in particular to the Bridge to Wellbeing program, which organizes free instructional seminars on everything from proper nutrition to personal budgeting to time management. In May alone, nearly two dozen such seminars were held across three states. The LIBRE initiative, meanwhile, regularly holds free classes on English proficiency, tax preparation, and GED certification. It handed out free turkeys in Florida last Thanksgiving. (Naturally, all of these efforts come with a dash of free-market evangelism.)

But this isn't just a PR effort. They have reorganized the whole political operation. Top executives have left and they have shuttered some of their most important political divisions. The radical chopping of the budget is the most important signal of all. This move away from national electoral politics is real.

But the story reveals something else about their motivation for doing it. It's not just that they are worried about their legacy, although that's undoubtedly part of it.  They are getting on in years and one can imagine a sort of panic at becoming a nationally known villain that late in life. But this observation shows what's really behind the move:

Charles Koch provided a window into his own thinking in an interview last month with ABC’s Jonathan Karl.

“When you look back over the years, over the last several cycles, hundreds of millions of dollars in electoral politics, what have you gotten for that?” Karl asked. “What’s been the return on that investment?”

“Well, I’ve gotten a lot of abuse out of it,” Koch said. “What have we gotten for it? Well, I think there have been some good things, particularly at the state and local level.”

“At the federal level,” he added, shaking his head, “we haven’t in any way changed the trajectory of the country.”

Karl suggested it hasn’t been a very good investment. “No, no it hasn’t,” Koch replied. “It’s been disappointing.”

He sounds like one of those sad Tea Partyers you see complaining that their congressman didn't unilaterally repeal Obamacare.

As Theda Skocpol's work has shown, the Tea Party was as much a bottom up as a top-down movement. The Kochs certainly helped out with logistical help, and were as motivated by the election of President Obama (and in particular the passage of the health care reforms) as any activist wearing a tricorn hat and waving around the Gadsdan flag. And like so many other Tea Party activists, Charles Koch is deeply disappointed that his congressional victories in 2010 and 2014 didn't result in his agenda being enacted immediately.

It's unsurprising that the first time activists inspired by their horror at Obama's election didn't understand that a couple of mid-term congressional victories were unlikely to "change the trajectory" of the country. But who would have guessed that someone as mature and experienced as Charles Koch could be so naive?

Skocpol's research showed that the Tea Party wasn't made up of the kind of conservative "reformers" the Kochs probably thought they were anyway:

[T]he views of both grassroots Tea Party activists and of many other Republican-leaning voters who have sympathized with this label do not align with free-market dogmas. Research by political scientist Christopher Parker at the University of Washington reinforces our conclusion that ordinary Tea Party activists and sympathizers are worried about sociocultural changes in the United States, angry and fearful about immigration, freaked out by the presence in the White House of a black liberal with a Muslim middle name, and fiercely opposed to what they view as out of control “welfare spending” on the poor, minorities, and young people. Many Tea Partiers benefit from Social Security, Medicare, and military veterans’ programs, and do not want them to be cut or privatized. About half of Tea Party activists or sympathizers are also Christian conservatives intensely concerned with banning abortion and repealing gay marriage.

They sound an awful lot like Trump voters, do they not?

So perhaps we can be grateful that the Kochs are true doctrinaire libertarians and are taking their billions and going home rather than following the constitution loving Tea Partiers into to their new phase as right-wing populist Trumpies. Not that their efforts at the state and local levels are benign by any means.  But at least they won't be helping a crazy man get a hold of the nuclear codes. That makes them patriots by today's Republican standards.