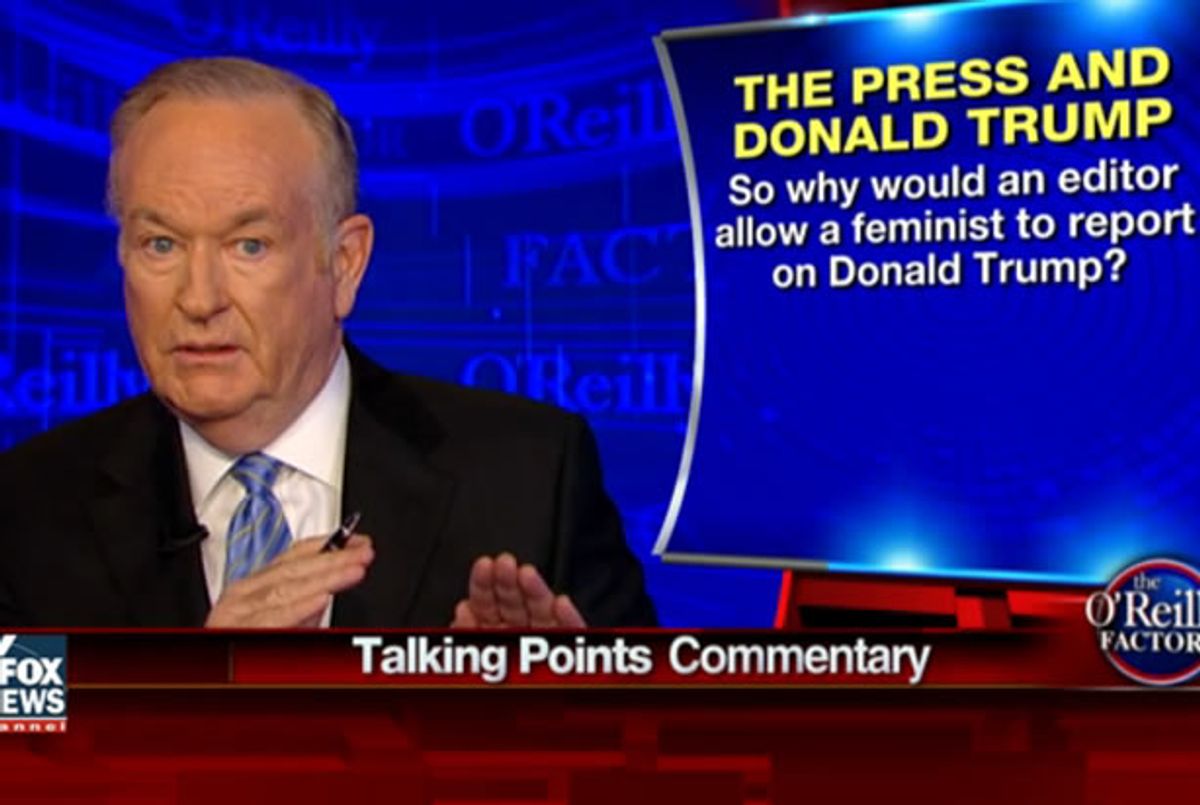 In the "Talking Points Memo" segment of The O'Reilly Factor Tuesday evening, host Bill O'Reilly criticized The New York Times for allowing a feminist to write a story about Donald Trump, claiming that because "Donald Trump's resume goes against that ideology," there's an inherent conflict of interest.

O'Reilly claimed that the article "Crossing the Line: How Donald Trump Behaved With Women in Private" had been thoroughly debunked because one of the women featured in it, Rowanne Brewer, later said that while her words were accurately quoted, they were presented in a way that didn't capture her tone. (Which, of course, may very well be true -- but it's also true that The Times' reporters accurately recounted her story, which irrespective of how she feels about the experience, speaks volumes about Trump's feelings about women.) Moreover, he said that the "discrediting" of the story " signals that it will be very difficult to get the truth when Donald Trump is involved."

"The Times assigned reporters Michael Barbaro and Megan Twohey to write the story," O'Reilly continued. "Mr. Barbaro has written a number of anti-Trump tweets, which should have disqualified him from writing about Donald Trump. Ms. Twohey is an excellent reporter with a great resume, but she is a feminist."

The mention of her feminism wasn't accidental. "The reason I mention 'feminism' is because Donald Trump's resume goes against that ideology. Mr. Trump, as we know, ran beauty contests and has been flamboyant in his interactions with the opposite sex," he said, as if being a sexist were the equivalent of a political position.

"This is a complicated story and one that should be covered by reporters without an agenda," O'Reilly concluded, before conceding a little ground to people who believe in equal rights. "Being a feminist can be a good thing, but this all comes back to being fair. The fundamental problem is that in the national media there are very few non-liberal people even working there."

Because, of course, only liberals can be feminist.