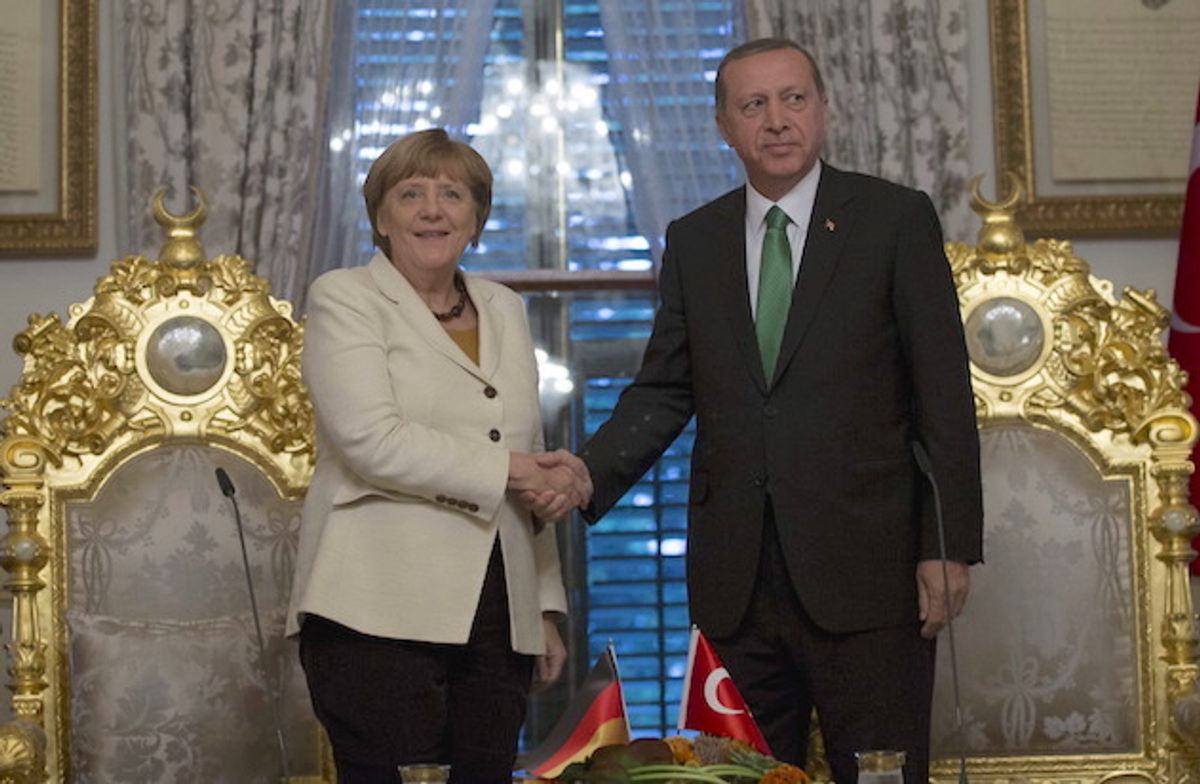 Germany appears to have sided with the Turkish president over its own citizen's free speech, as Europe makes concessions to Turkey's increasingly repressive government in return for its collaboration in the E.U.'s illegal refugee deportation deal.

A regional court in the major German city Hamburg banned recitation and re-publication of most of the verses of a satirical poem by a German comedian in a ruling on Tuesday.

The increasingly authoritarian Turkish leader subsequently filed a complaint with German prosecutors, claiming that the poem amounted to libel and abuse.

The regional court ruled that just six of the poem's 24 verses could be recited, describing the others as "abusive and defaming." The six lines the court permitted criticize Turkey's violent suppression of minority groups, namely the Kurds.

Christian Schertz, the comedian's lawyer, called the court’s decision “wrong,” insisting it goes “against artistic freedom.” He will likely appeal the ruling.

The court maintains that it is balancing artistic freedom with Erdoğan's rights. "Through the poem's reference to racist prejudice and religious slander as well as sexual habits the verses in question go beyond what the petitioner [Erdoğan] can be expected to tolerate," the court wrote.

Section 103 of Germany's criminal code technically does not allow insulting organs or representatives of foreign states. This crime potentially carries up to three years in prison, but is rarely enforced.

German Chancellor Angela Merkel herself personally authorized prosecutors to go after Böhmermann, leading to widespread backlash within her country.

The decision was construed to be a political concession to Turkey, the country to which Europe is deporting refugees and migrants en masse, in what human rights groups and legal experts say is an illegal and immoral program.

In March, the E.U. and Turkey, a NATO member, reached an agreement dictating that all undocumented migrants that cross from Turkey into Greece after March 20 will be deported back to Turkey.

In early April, Greece began sending hundreds of refugees and migrants at a time to Turkey.

A human rights lawyer told Salon that E.U. "member states are literally washing their hands of millions of lives."

Human rights groups have blasted the E.U.-Turkey deal, and have reported that Turkey is deporting hundreds of refugees back to Syria on a daily basis, threatening people's lives and violating the international legal principle of non-refoulement.

Europe, where a virulent wave of racism and xenophobia is growing, stands to gain more from the deal than Turkey, which is hedging its bets on joining the European Union.

Merkel has been quite supportive of Turkey's potential E.U. membership. The German chancellor and Erdoğan have played a kind of game of political football, each pushing for quid pro quos.

Critics have accused Merkel "of ignoring human rights violations and actions against journalists in Turkey, a candidate for EU membership," Reuters wrote.

Other critics have accused "her of kowtowing to Erdogan," AFP noted.

Merkel was accused of causing the poetry scandal in the first place by telling Turkish Prime Minister Ahmet Davutoğlu that the satirical poem is "deliberately insulting." She later claimed her comment was "a mistake," but it had already helped fuel the Turkish government's repression.

A lawmaker from Merkel's right-wing Christian Democrat party recited the now banned verses of the poem in parliament earlier this month, condemning it for supposedly violating Erdoğan's "honor."

From protest song to protest poem

Böhmermann wrote the protest poem in response to the Turkish government's clampdown on a protest song.

The song criticized the German government for accommodating the repressive Turkish regime in return for its political collaboration.

“Be nice to him, as he’s holding all the cards in his hands,” a singer said. “Hand over your money and he’ll build you a refugee tent.”

“Press freedom gives him a swollen neck,” the song continued. “With tear gas and water cannons he’s riding through the night.”

“Equal rights for women… beaten up equally,” it added, showing footage of Turkish activists in an International Women’s Day demonstration being beaten with batons by riot police.

Germany's ambassador to Turkey, Martin Erdmann, was summoned to the Ankara foreign ministry over the satirical song and video. Turkish officials blasted the broadcast and demanded that NDR pull it from air. The German broadcaster refused to do so, and satirized the Turkish government in response.

The song and video also criticized Turkey’s brutal military campaign against Kurdish groups, claiming Erdoğan would “much rather” bomb them than ISIS.

Since Erdoğan entered office in 2014, more than 1,800 cases have been opened against people accused of insulting him.

At least 894 journalists in Turkey were dismissed in the first four months of 2016, according to a report by a press freedom group.

Journalists, celebrities and even children have gone to trial, and in some cases prison, for insulting the Turkish government.

In December 2014, 16-year-old Turkish student Mehmet Emin Altunses was arrested at school. He was subsequently thrown in jail for “insulting” Erdoğan. Altunses had referred to the Turkish president as the “thieving owner of the illegal palace,” condemning his government’s corruption.

That same month, Erdoğan claimed insisted, "Nowhere in the world is the press freer than it is in Turkey."

The Committee to Protect Journalists has said the exact opposite. In 2012 and 2013, NATO member Turkey imprisoned more journalists than any other country — including longtime Western enemies China and Iran — according to the watchdog group.

In the past year, this repression has escalated.

Amid the scandals in his country, German Federation of Journalists Chairman Frank Überall criticized Erdoğan, saying he has “apparently has lost his grip.” Überall added that “the persecution of critical journalists is bitter reality” in Turkey.

In March, the Turkish government seized newspapers critical of Erdoğan, including the major daily Zaman, and forced them to publish pro-regime propaganda.

That same month, Erdoğan essentially redefined critical journalists and activists as terrorists. He publicly declared that there is no difference between “a terrorist holding a gun or a bomb and those who use their position and pen to serve the aims” of terrorists, adding that this applies to journalists, activists and lawmakers.

At the same moment, the Turkish government has supported extremist groups in Syria, including al-Qaeda affiliate al-Nusra.

Erdoğan has also carried out a vicious military campaign against his country's Kurdish minority.

The Turkish government has displaced hundreds of thousands of people and killed hundreds more in raids and attacks on Kurdish-majority communities.

Some predominately Kurdish areas have been so ravaged by the fighting that they look like war-torn Syria.

Kurdish fighters in or aligned with the militant groups the YPG/YPJ and the PKK are among the few leftist, secular and feminist forces in the Middle East. For years, they have fought the Turkish government in hopes of creating an independent, autonomous Kurdistan.

Since the rise of the self-proclaimed Islamic State in early 2014, Kurdish militant groups have also proved themselves to be some of ISIS' most feared opponents.

Turkey, under the leadership of aspiring sultan Erdoğan, has lashed out with enormous violence, in hopes of crushing the Kurdish resistance movement.