The GOP's new attack dog and resident "manly man": Sen. Tom Cotton is trying to impress his base by hollering about that weenie Obama 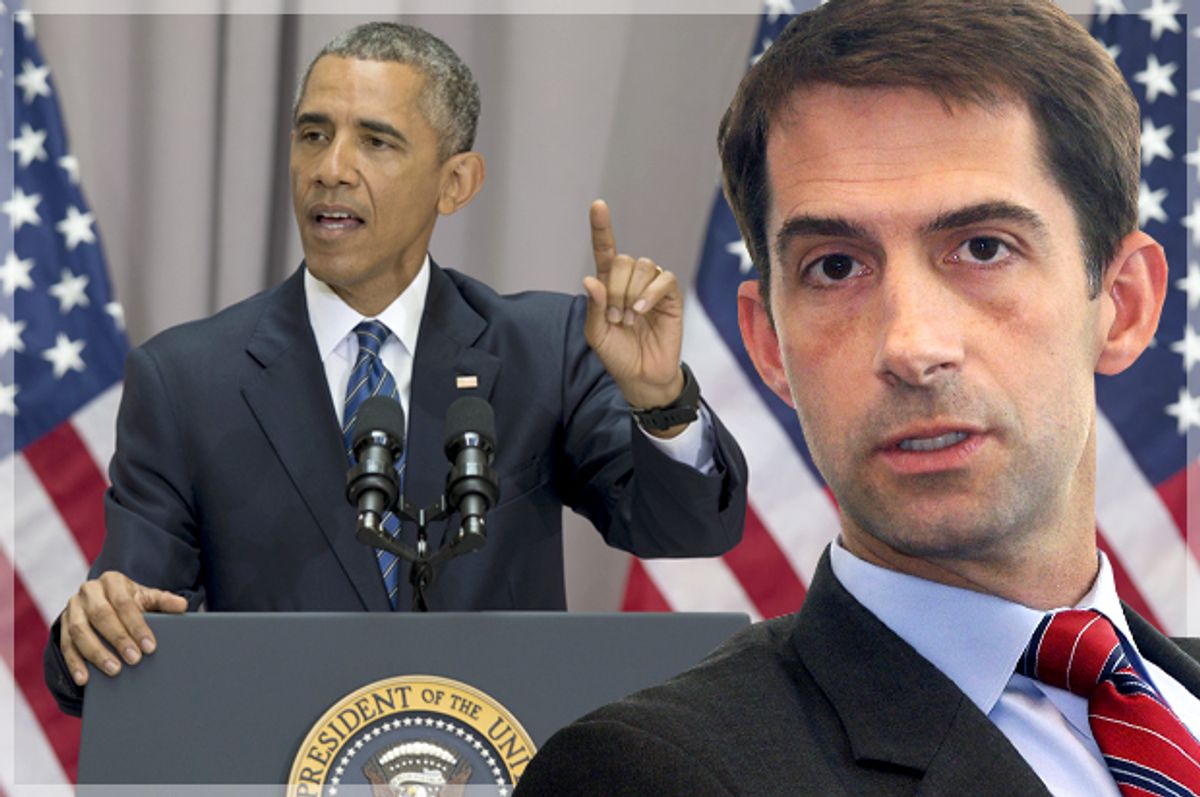 It seems strange that the name of Sen. Tom Cotton (R-Arkansas) does not come up more on the list of conservative third-party candidates the #NeverTrump wing of the Republican Party wants to recruit for a White House run this fall. I suspect there are two reasons for this:

Either of these theories makes sense on its own terms or together. In a mirror image of the left’s “four years of a catastrophic Donald Trump administration would heighten the contradictions between the parties and bring about a more radically progressive president in 2020” pipe dream, Republicans could very well be banking on four years of Hillary Clinton bringing about a conservative revolution in the executive branch. And maybe this revolution will drag Congress further right at the same time, assuming Congress could go further to the right without falling off the edge of the world.

And who better to lead this revolution than Tom Cotton, a man the Heritage Foundation could have grown in a secret lab where it is trying to genetically engineer the perfect conservative for today’s Republican Party, which never met a he-man it didn’t want to slobber over like a particularly excitable Boston terrier?

Jonathan Chait has a piece over at New York Magazine that traces the history and importance of the concept of “manliness” in Republican politics. Manliness in its politicians has long been one of the ways the GOP contrasted itself with the supposedly weak and girlish Democrats, from Ronald Reagan chopping wood on his California ranch to George W. Bush clearing brush on his spread in Texas or striding across the deck of an aircraft carrier in a flight suit. The tradition continues today in online discourse and Maureen Dowd columns, and of course in the candidacy of Donald Trump, a man who literally captured news cycles this primary season by talking about the size of his dick.

This fetishism is what carried Cotton to fame on the right wing. The Harvard-trained lawyer was an Army lieutenant stationed in Iraq when he sent an angry letter to the New York Times, excoriating the paper for publishing a story on a secret U.S. effort to trace terrorist financial networks. (The Bush administration claimed publishing the story compromised national security.) Ever since, Cotton’s career, in one term in the House and now most of one term in the Senate, has been marked by repeated macho posturing and trash-talking at his political opponents.

The latest example came this week, when he called into Hugh Hewitt’s radio show. Cotton has been hollering about the dust-up over a recent Times profile of White House adviser Ben Rhodes, in which Rhodes appeared to say that the Obama administration had lied in order to sell the nuclear weapons deal it signed with Iran last year to the American public. During the interview, Cotton called Rhodes a “chump” and a “failed novelist” (Rhodes was an aspiring fiction writer before turning to politics), among other fraternity-level taunts.

“You know, most of who’s left in the administration now are all these yes men and fan boys who were van drivers or press flaks for Barack Obama in Iowa and New Hampshire in 2008…As if any of them have ever seen anything more dangerous than a shoving match when they were playing beer pong in the back of a bar in Georgetown.”

Yes, the Obama administration is staffed by a bunch of nancy boys and noodle-armed weenies who have never been done anything more vicious than given each other some weak shoves while competing to see who can toss a Ping-Pong ball into a plastic cup full of warm Keystone in some preppy Georgetown watering hole. Not like manly man Tom Cotton, who fought in Iraq and therefore knows more about What It Takes to Defeat Our Enemies than all of those sissies put together.

Cotton is the archetype of manliness that Republican politicians love, the type of guy who probably still thinks the U.S. could have won the war in Iraq if only bureaucrats in their comfortable Washington offices hadn’t tied the soldiers’ hands with inconveniences like “rules of engagement” and instructions to “not commit war crimes.” His running against Hillary Clinton this year would come full circle from 1992, when Clinton’s husband ran against war hero George H.W. Bush and saw his own manliness questioned for having skipped out on the Vietnam War in the late 1960s.

But Cotton and his handlers seem to have decided to take on that battle in 2020, when the Arkansas senator can claim to be the true conservative the GOP needs to defeat Hillary Clinton, who is so unmanly that she is literally a woman. Until then, the Republicans will just have to find other outlets to let off all their testosterone-fueled steam.